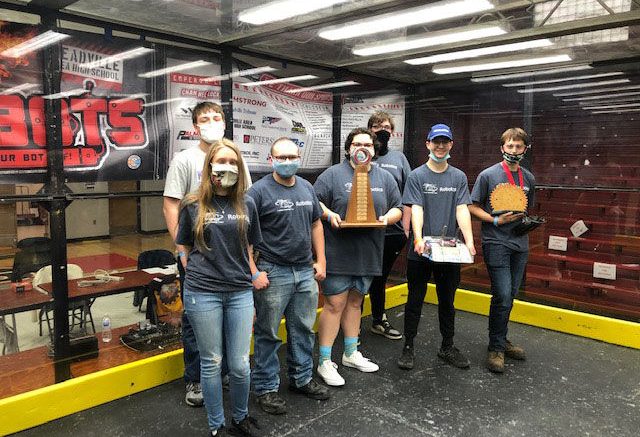 The RoboBOTS tournament is an opportunity for area students to practice their engineering skills and create remote-controlled robots that battle each other in one-on-one showdowns.

Lyons said the mechanical experience for the students is instrumental in placing them in the job market.

“That’s really where the jobs are, in manufacturing,” he said.

Lyons said engineers from a local manufacturing company have gone to the school to give guidance to the students as they designed their robots.

RoboBOTS is sponsored by the northwestern Pennsylvania National Tooling and Machining Association. It is also supported by the U.S. armed forces, which sent representatives to view the event.

Venango Technology Center had two robots prepared for the ring – Chimera and Pegasus.

Although Chimera was knocked out of the competition, Pegasus rose through the rounds to compete against Cochranton High School’s robot, Courage.

Pegasus slammed Courage into the wall, knocking it on its side, and since it was unable to right itself, Pegasus won the match. This broke the seven-season winning streak for Cochranton.

The win qualified Pegasus for the final round of competition against Meadville High School’s Peacekeeper, a vertical spinner robot.

Since Peacekeeper remained undefeated throughout the tournament, Pegasus had to win two matches over Peacekeeper to win the title.

In the first match, Pegasus threw Peacekeeper from the ring to win the match. The battle, however, cost Pegasus one of its two titanium horns.

Lyons said the horns were built so that, “when they hit us, their weapons took the brunt of the force. It is like trying to move a brick wall. The force was put back on them,” he said.

The final showdown started with several severe blows. Then Pegasus cornered Peacekeeper and flipped it on its back, which launched the tech center team to victory.

Pegasus’s secret weapon that brought the victory was a set of magnets on the bottom of the robot that held it steadily to the floor when its opponent crashed into it, Lyons said.

“With the magnet design, the robots would hit us and destroy themselves,” he said.

The magnets were a new design idea for the RoboBOT tournament.

“We didn’t want to keep copying” things from the past. “We wanted to be revolutionary and it worked,” said Lyons.

Pegasus also won the prize for best engineered, and Peacekeeper won the “King of the Ring” award for biggest crowd-pleaser.

The winning team usually goes on to another tournament, but a national competition won’t be held this year due to COVID-19 precautions.

From staff reports The state departments of Education, Agriculture and Human Services have announced thousands of students and families in need will continue to receive…

WASHINGTON (AP) — Controlling Congress and the White House for the first time in a decade, Democrats were hopeful that this would be the year…

NEW YORK (AP) — Taylor Sheridan, initially brought on to rewrite the mountain thriller “Those Who Wish Me Dead,” gradually got more invested in the…

Hi! My name is Tyah – but you can call me Ty! I am a one-year-old spayed female Lab/Pit Bull mix. I am a big…

(Family Features) From little ones learning the game to professional athletes pushing sports to new levels, nutrition impacts the ability to re-energize, stay hydrated, and…

From staff reports Free food boxes will be given to families in the Oil City Area School District through a “Farmers to Families” program. The…

From staff reports Drake Well Museum and Park will provide free admission to people who are serving in the U.S. military and their families as…

BOISE, Idaho (AP) — A sixth-grade girl brought a gun to her Idaho middle school, shot and wounded two students and a custodian and then…

PITTSBURGH (AP) — In the final days of a 16th season that came in the form of a 56-game sprint and included a cross-country trade,…

The Associated Press Jason Statham says very, very little in his new film. The English actor must have only needed to memorize about three pages…

Hi! My name is Chewey! I am a 7-year-old neutered male Shepherd mix! I’m a big boy weighing 65 pounds! I love love love my…