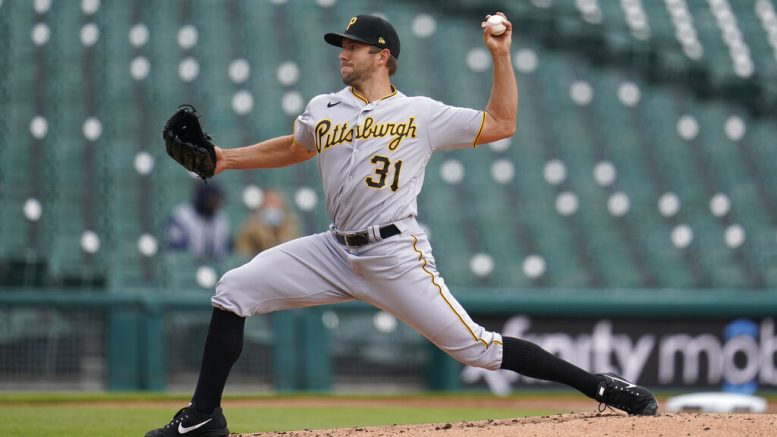 Pittsburgh Pirates pitcher Tyler Anderson throws against the Detroit Tigers in the third inning during the first game of a doubleheader baseball game in Detroit, Wednesday, April 21, 2021. (AP)

DETROIT (AP) — The Pittsburgh Pirates were hoping to get to .500 for the season on Wednesday.

Instead, they’ll have to wait.

Detroit rallied for a 5-2 win in the second game behind Jonathan Schoop’s go-ahead home run in a three-run fifth inning, leaving the Pirates at 8-10 following a 1-6 start.

The teams played the doubleheader of seven-inning games under pandemic rules after Tuesday night’s game was postponed on a snowy day in the Detroit area. There was still a white dusting on top of the bushes beyond the wall in center field Wednesday, plus some flurries late in the game. The temperature at game time was 40 degrees, but Anderson didn’t seem too preoccupied with that.

“The dugouts are fine,” he said. “Not too bad in the dugouts.”

Spencer Turnbull (1-0) allowed one run and two hits in five innings to win the second game, his season debut after recovering from COVID-19. Gregory Soto pitched the seventh for his second save.

“I thought the first inning was a little rough, but I felt really good about the rest of my game,” Turnbull said. “I probably needed that inning to knock off the rust.”

Miguel Yajure (0-1) gave up four runs and four hits in 4 2/3 innings in his Pirates debut.

“I found out last night that I was going to start today, so I went through my usual routine, but this is the first time I’ve started a game in almost two years,” Yajure said through a translator.

Erik González hit an RBI double in the first, but the Pirates didn’t score again off Turnbull.

“He had a pretty high pitch count in the first inning, but he finished strong enough that he would have pitched the sixth if he hadn’t been sitting for 30-45 minutes,” Tigers manager A.J. Hinch said. “I liked how he adjusted and got himself back into the game.”

Niko Goodrum’s leadoff homer tied the score in the third.

After Schoop’s homer, rookie Akil Baddoo had a run-scoring double for his 12th RBI and Willi Castro singled in a run off David Bednar. Left fielder Bryan Reynolds made a diving catch of Robbie Grossman’s sinking liner for the second out.

“Miguel went out there and commanded the zone,” Pirates manager Chris Shelton said. “He gave up the homer to Goodman on a pretty good pitch, and then Schoop hit one off the only changeup he threw all day without any life.

“This is what we wanted to see from him. We just didn’t hit.”

Phillip Evans homered off Bryan Garcia for a 4-2 lead in the sixth. Harold Castro hit an RBI single in the bottom half.

In the first game, Pittsburgh scored all its runs in the fourth inning after Michael Fulmer (1-1) retired the Pirates in order through the first three.

Anderson (2-2) allowed two runs and three hits with two walks and seven strikeouts. Kyle Crick worked a perfect sixth, and Richard Rodríguez retired the Tigers in order in the seventh and final inning for his second save.

Victor Reyes doubled in the third and scored on Robbie Grossman’s sacrifice fly.

The Pirates answered immediately. Adam Frazier, Evans and Reynolds started the fourth with consecutive singles, the last one driving in Frazier. Evans scored on Colin Moran’s groundout, and González added an RBI single one out later.

“I think we found a couple holes,” Pirates manager Derek Shelton said. “We did a nice job. We gave up a run, we came right back. … I thought our at-bats got better as the game went on.”

Schoop hit an RBI single for Detroit with two outs in the bottom of the inning.

“I thought today went well,” Fulmer said. “It’s just one of those games, one of those innings really. Everything else was pretty good.”

Detroit recalled INF Zack Short from the alternate training site, and he made his big league debut, drawing two walks.

“I tried to make the game as normal as possible,” Short said. “Just a little bit colder than normal.”

Short also made a nice play at third base on Moran’s grounder in the fourth, although that wasn’t enough to prevent Pittsburgh’s big inning.

INF Rodolfo Castro made his big league debut for the Pirates in the second game, going 0-3 with a strikeout.

“I thought I was coming up here to be on the taxi squad,” he said. “It turned into a great day when they told me I was playing.”

The Tigers designated INF Renato Núñez for assignment before the doubleheader opener. In between games, they optioned RHP Joe Jiménez to the alternate training site and reinstated Turnbull from the injured list. They also named OF Derek Hill as the 27th man for the second game.

Before the first game, Pittsburgh claimed OF Ka’ai Tom off waivers from Oakland, recalled Rodolfo Castro from the alternate site and designated OF Anthony Alford for assignment.

Pirates: 3B Ke’Bryan Hayes (left wrist inflammation) was expected to play for Pittsburgh’s alternate site team Wednesday night. Hayes is eligible to come off the 10-day injured list, but the team is remaining vague on a possible return.

Tigers: Manager A.J. Hinch said DH Miguel Cabrera (left biceps strain) will hopefully be back this weekend, but OF Nomar Mazara (left abdominal strain) will not return during this homestand.

The teams finish their three-game series on Thursday afternoon. RHP Mitch Keller (1-2, 8.74 ERA) is scheduled to start for the Pirates while José Ureña (0-3, 5.52) pitches for Detroit.