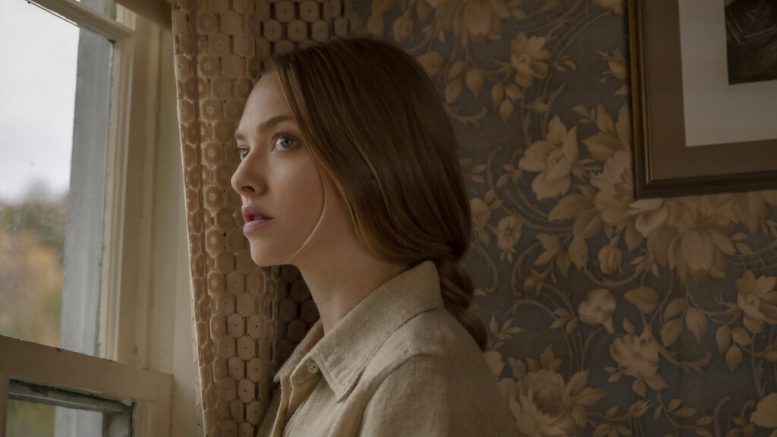 This image released by Netflix shows Amanda Seyfried in a scene from "Things Heard And Seen." (Netflix via AP)

Hollywood thrillers in which sophisticated, attractive city folk move to creaky old country homes and experience scary things are a dime a dozen. Less common is when those Hollywood thrillers are based on the theology of 18th-century Swedish mystic Emanuel Swedenborg.

But here we are — a Swedenborgian thriller — and thus it’s not a bad idea to read up a bit on the man, by which we mean to Google him, before diving into “Things Heard & Seen,” a well-cast and often entertaining but campy and sometimes obvious thriller starring Amanda Seyfried and James Norton.

What you’ll learn is that Swedenborg believed (among other things) that death was just a continuation of life — and that people lived on, in the spiritual world, past the expiration of their physical body. For the film’s purposes, we’ll boil it down for you: Ghosts!

In fact, the film, based on the novel “All Things Cease to Appear” by Elizabeth Brundage, begins with a Swedenborg quote: “Things that are in heaven are more real than things that are in the world.” So even if you’ve skipped your theology homework (tsk tsk), this should alert you to a spectral influence in the story — maybe even a seance or two.

We begin in the winter of 1980, when a perturbed-looking George Claire (Norton) drives up a snowy road to his isolated home. Immediately, it’s obvious something terrible has happened.

Flashback to the spring before, in a Manhattan apartment. George and his wife Catherine (Seyfried) are celebrating the fourth birthday of their daughter, Franny. George — handsome and chiseled, with the kind of tousled hair that looks breezy but you know he works on it — has an announcement to make: Not only has he completed his Ph.D. in art history, but he’s found a teaching job upstate. “Oh, at Bard?” asks a (snobby) friend. No, he replies, at a place called Saginaw.

Nobody is impressed, but Catherine, despite having no desire to leave her coveted job as an art restorer, feels the need to support her husband. For one thing, she tells a friend, they need the money — his wealthy parents have finally cut him off. The friend warns Catherine she’s giving up a lot to go live in a place filled with “rich horsey weekenders and full-time rednecks.”

But move they do, to beautiful Hudson Valley (writer-directors Shari Springer Berman and Robert Pulcini draw out both the charm and the isolation of the place) and their chosen town, which is ominously called … Chosen. (Certain things are unabashedly telegraphed in this film. Then again, sometimes they’re red herrings. Maybe? Why is Catherine bulimic, for example?)

The house George has found, on an old dairy farm, is huge and creaky and needs work, but Catherine launches into the job. Soon, however, it becomes clear the family is not entirely alone. As happens in haunted house movies, there are strange noises and strange voices and dodgy electricity. There are also historical hints sprinkled through the home, suggesting past trauma.

Catherine is much more attuned to these than George, who’s spending most of his time trying to curry favor with colleagues in his art history department, including the chairman, Floyd DeBeers, who has a fascination not only with Swedenborg but his influence on prominent landscape painter George Inness (DeBeers is played by a deliciously august F. Murray Abraham.)

Catherine also develops an affection for two brothers, Eddy and Cole, who live next door and offer to do odd jobs. As we suspect early on, there’s more to these brothers and their connection to the home than meets the eye.

What’s most interesting, though, is not all the sometimes ridiculous plot twists and hints of dark motives and impending doom. It’s the relationship between Catherine and George, who may not know each other as well as they thought. Well … they definitely don’t. Seyfried in particular is a grounding presence and a wonderfully empathetic performer. As for Norton, he does a nice job keeping us wondering (for a bit) whether he’s simply a good-looking social striver with designs on more than his talent deserves, or something worse. Also, this British heartthrob nails the American academic vibe.

It all comes hurtling toward a strenuous conclusion, and you can bet those aforementioned ghosts get their moment, too. But that’s not necessarily a bad thing. If you want to know why, you may want to ask Emanuel Swedenborg.

“Things Heard & Seen,” a Netflix release, is unrated by the Motion Picture Association of America. Running time: 119 minutes. Two stars out of four.

From staff reports The superload moving from West Milton, New York, to Wampum, Pennsylvania, has been delayed again due to weather. At the earliest, the…

PITTSBURGH (AP) — For the first time in Mike Tomlin’s long tenure as the head coach of the Pittsburgh Steelers, he enters the offseason unsure…

Clementine is a happy girl with a bright personality! She loves attention and is very affectionate. She loves to play with toys and has lots…

(Family Features) Adding salmon to your weekly menu can take dinnertime from drab to delicious. Combining it with bright, fresh veggies heightens the savory experience…

From staff reports The sixth annual Nature Art Showcase and Sale will be held Friday and Saturday, Feb. 4-5, in Franklin. This indoor art exhibit…

Biden to give away 400 million N95 masks starting next week

Biden to highlight progress, ask for patience over setbacks

NEW YORK (AP) — After a month at no. 1, “Spider-Man: No Way Home” has finally been overtaken at the box office. Paramount Pictures’ “Scream”…

By LAURA O’NEIL Staff writer An oversized load may disrupt travel this week on Interstate 80, Route 322 west, which includes Liberty Street in Franklin,…

WASHINGTON (AP) — The failure of last week’s high-stakes diplomatic meetings to resolve escalating tensions over Ukraine has put Russia, the United States and its…

MINNEAPOLIS (AP) — The six-year legal battle over pop superstar Prince’s estate has ended, meaning the process of distributing the artist’s wealth could begin next…

From staff reports The Oil Region Alliance will hold a chocolate-making workshop from 2 to 4 p.m. Sunday, Feb. 6, at the Tarbell House, 324…

KANSAS CITY, Mo. (AP) — Mike Tomlin and Ben Roethlisberger are brutally honest about the Steelers’ chances of advancing past the wild-card round of the…

NEW YORK (AP) — Netflix is raising prices for its video streaming customers in the U.S. and Canada, less than a year and a half…

Ashes of Winter the movie star dolphin released into Gulf

From staff reports The superload moving from West Milton, New York, to Wampum, Pennsylvania, has been delayed again due to weather. At the earliest, the…

From staff reports First Presbyterian Church of Clarion will distribute food bags at 2 p.m. Thursday. No pre-registration is required for the monthly giveaway. This…

Biden to give away 400 million N95 masks starting next week

Biden to highlight progress, ask for patience over setbacks

PITTSBURGH (AP) — For the first time in Mike Tomlin’s long tenure as the head coach of the Pittsburgh Steelers, he enters the offseason unsure…

By RANDY BARTLEY Staff writer The Penn Highlands Healthcare System, like others across the nation, is feeling the stress from the COVID-19 omicron variant. “The…