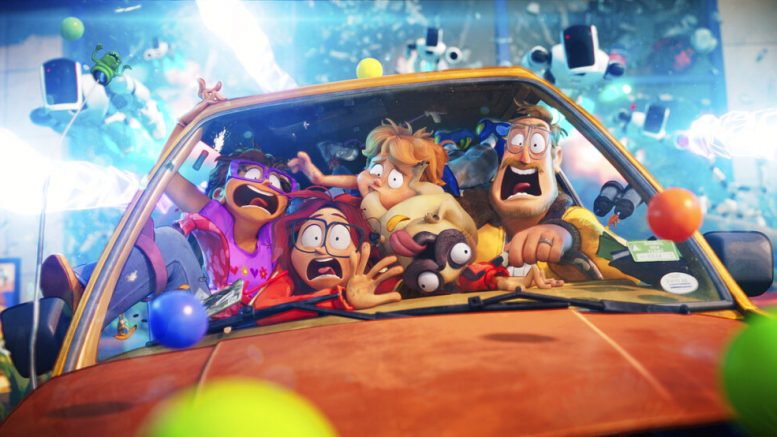 This image released by Netflix shows a scene from "The Mitchells vs The Machines." (Netflix via AP)

Easily the most heartfelt movie about family life that also includes a robot apocalypse and a pug often mistaken for a loaf of bread, “The Mitchells vs. the Machines” is an antic, irreverent animated delight that somehow doesn’t sacrifice depth even as it hurtles forward at breakneck comic speed.

Director Mike Rianda’s film, produced by Phil Lord and Chris Miller, shares much of the DNA of Lord and Miller’s other cartoon adventures (“The Lego Movie,” “Spider-Man: Into the Spider-Verse”) in its ability to remake movie cliches with madcap irreverence, youthful zeal and a contemporariness that often eludes less freewheeling films.

“The Mitchells vs. the Machines,” which debuts Friday on Netflix (after originally being set for theatrical release from Sony Pictures), manages to spin through a sincere father-daughter relationship, our technology addictions, Instagram jealousy, and general feelings of inadequacy while breezing through an end-of-the-world plot accidentally initiated by a reckless tech CEO. Oh, there are maniacal Furbys, too.

But for all its fast-paced zaniness, “The Mitchells vs. the Machines,” scripted by Rianda and his writing partner Jeff Rowe (also co-director), is basically a good old-fashioned family road trip movie, and the Mitchells slide in somewhere between the Griswolds and a more accident-prone Incredibles. They’re neither a hopeless clan nor a perfect one (usually the only two options in family movies), but a flawed, loving family.

Rick Mitchell (Danny McBride) is a devoted but distracted dad who, when faced with more complicated emotional issues, happily retreats to home improvement and woodworking. He and his wife Linda (Maya Rudolph) have a daughter heading to college, Katie (Abbi Jacobson), a younger dinosaur-crazed boy named Aaron (Michael Rianda) and a dog named Monchi — a four-legged running gag. They all have their own interests but share a common smartphone addiction. So when Rick suggests a dinner with “10 seconds of unobstructed family eye contact,” it’s excruciating torture for everyone.

When Katie is about to leave for college, her relationship with her father has reached a low point. Katie, an insanely creative budding filmmaker, can’t ever get him to pay attention to her creations. In a last-ditch stab at bringing them closer, Rick cancels her flight and the family drives across the country instead. Part of what’s great about “The Mitchells vs. the Machines” is that, even though it’s a big-budget computer-generated animation, it pulses with a hand-drawn, DIY spirit. Along the way, Katie is filming and her work frequently bleeds into the movie, itself, redecorating the frame and sometimes taking it over. “The Mitchells vs. the Machines” is simultaneously an ode to the creative possibilities at our fingertips and a warning to the greater dangers of digital dependence.

The latter is especially true once a newly launched phone turns diabolical overlord and scoops up the world’s population with little more than promises of free Wi-Fi. The Mitchells, by luck and pluck, are the only ones to go undetected, a success owed less to their intelligence than their imperfections. The engulfing dystopia makes for a dramatic and metaphorical backdrop for the Mitchells to work through their issues. What, after all, is more apocalyptic for a father than a daughter leaving home for college?

Rianda’s film drags some in the big finale as the Mitchells go to battle in Silicon Valley. The mom, and Rudolph, are a little wasted. But the father-daughter relationship is primary here, and it’s really wonderfully done. I think what “The Mitchells vs. the Machines” does so well is show how things evolve between parents and children with time. It’s a bond that’s permanent in so many ways but a relationship forever fluctuating with the pushes and pulls of growing up. The filmmakers are always cutting to old home movies and other memories of Rick and Katie in various stages through the years. In “The Mitchells vs. the Machines,” family life is a brilliant, ever-changing collage.

“The Mitchells vs. the Machines,” a Netflix release, is rated PG by the Motion Picture Association of America for action and some language. Running time: 114 minutes. Three stars out of four.

Clementine is a happy girl with a bright personality! She loves attention and is very affectionate. She loves to play with toys and has lots…

(Family Features) Adding salmon to your weekly menu can take dinnertime from drab to delicious. Combining it with bright, fresh veggies heightens the savory experience…

From staff reports The sixth annual Nature Art Showcase and Sale will be held Friday and Saturday, Feb. 4-5, in Franklin. This indoor art exhibit…

Koa is such a sweet kitty. He loves pets and cuddles, but is also content to curl up on his own, especially in the sunshine!…

(Family Features) Before you completely overhaul the way you live, keep in mind making positive changes may just be a few simple steps away. Starting…

While it might be hard to imagine with snow blanketing the ground, my head is currently filled with visions of lush green grass and fragrant…

The VFW Action Corps community has done it again! Thanks to your efforts, H.R. 1836, the Guard and Reserve GI Bill Parity Act of 2021,…

By STACEY GROSS Contributing writer Does your two-year-old have a good vocabulary? How do you know? What if they don’t? Early intervention is a set…

From staff reports Second Presbyterian Church is celebrating its 150th year in 2022. Monthly events are scheduled to celebrate the occasion. A list of the…

Out of this world: 555.55-carat black diamond lands in Dubai

WASHINGTON (AP) — The failure of last week’s high-stakes diplomatic meetings to resolve escalating tensions over Ukraine has put Russia, the United States and its…

MINNEAPOLIS (AP) — The six-year legal battle over pop superstar Prince’s estate has ended, meaning the process of distributing the artist’s wealth could begin next…

From staff reports The Oil Region Alliance will hold a chocolate-making workshop from 2 to 4 p.m. Sunday, Feb. 6, at the Tarbell House, 324…

KANSAS CITY, Mo. (AP) — Mike Tomlin and Ben Roethlisberger are brutally honest about the Steelers’ chances of advancing past the wild-card round of the…

NEW YORK (AP) — Netflix is raising prices for its video streaming customers in the U.S. and Canada, less than a year and a half…

(Family Features) Before you completely overhaul the way you live, keep in mind making positive changes may just be a few simple steps away. Starting…

Grizzy recently came to us because his owner was no longer able to keep him. He can be shy, but he is super sweet. He…

WASHINGTON (AP) — The Supreme Court has stopped a major push by the Biden administration to boost the nation’s COVID-19 vaccination rate, a requirement that…

The Associated Press Earth simmered to the sixth hottest year on record in 2021, according to several newly released temperature measurements. And scientists say the…

LOS ANGELES (AP) — Mikey Anderson, Viktor Arvidsson and Anze Kopitar scored in a span of 1:23 of the third period and the Los Angeles…

CLEARWATER, Fla. (AP) — The ashes of Winter the dolphin were returned to the sea on Thursday, about two months after the beloved marine mammal…

Venango Co. starting process to ramp up for election season

US shoppers find some groceries scarce due to virus, weather

US consumer prices soared 7% in past year, most since 1982

By RANDY BARTLEY Staff writer The Penn Highlands Healthcare System, like others across the nation, is feeling the stress from the COVID-19 omicron variant. “The…

Out of this world: 555.55-carat black diamond lands in Dubai

Bust yields $20K worth of drugs

By RODNEY L. SHERMAN Clarion News editor A Jan. 12 investigation and search warrant execution at a Farmington Township camp turned up about $20,000 worth…

For Oath Keepers and founder, Jan. 6 was weeks in the making

WILMINGTON, Del. (AP) — Two days after the election on Nov. 3, 2020, the Oath Keepers were already convinced that victory had been stolen from…