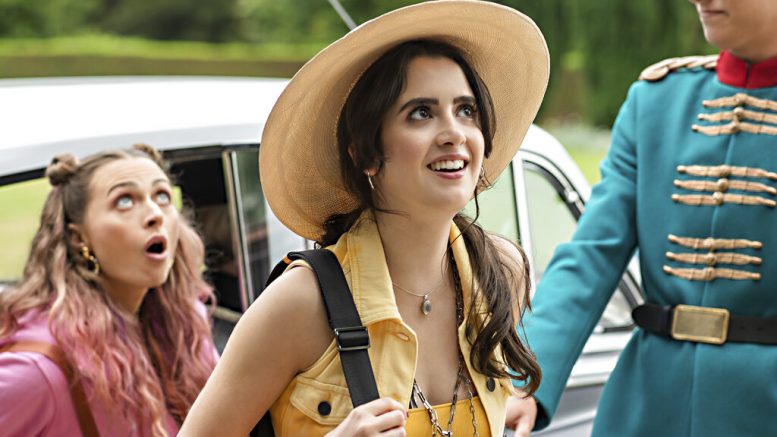 This image released by Netflix shows Laura Marano, center, in a scene from "The Royal Treatment." (Netflix via AP)

In the new Netflix movie “ The Royal Treatment,” the chief of staff for the prince of a fictional European country accidentally calls a run-down salon in the Bronx to schedule a haircut for His Royal Highness, Prince Thomas. Upon hearing who he says he works for, Izzy, the owner of said salon replies, “Yeah, and I’m the Queen of Genovia” in a thick New York accent.

Genovia, of course, is the fictional country of “The Princess Diaries,” where Anne Hathaway and Julie Andrews rule. But anyone inclined to watch “The Royal Treatment” already knew that. And its mention raises questions about whether the movie “The Princess Diaries” or the country Genovia (and by extension Princess Mia) exists in this universe. Unfortunately, neither scenario is explored, but perhaps more importantly it suggests that this movie actually has a sense of humor about itself which already puts it a slight cut above its peers.

The best thing going for this very generic endeavor is Laura Marano, the Disney Channel alum who plays Izzy. She’s a hairstylist with a heart of gold and dreams of world travel who will storm out of a $500 job when she can’t even afford the subway ride home because she sees her client disrespecting a domestic worker. Respect for clients, subjects, and all manner of people is an overriding theme, which is hard to argue with and at least shows that this movie is trying to be a bit more than a “common girl makes good with random prince” tale.

Naturally, Prince Thomas (played by Mena Massoud, who starred in the live-action “Aladdin”) finds Izzy to finish the cut and invites her and her employees to Lavania to do the hair and makeup for his wedding, because the movie has to keep going somehow and neither logic nor reality seems to govern plot developments here.

But for as generally appealing as Izzy is, Prince Thomas is woefully underdeveloped. It’s a good thing Massoud has some innate charisma going for him because his character is somehow both bland and ridiculous. He’s sheltered enough to feel like he’s never had a conversation with anyone who wasn’t in his immediate employ, but then casually mentions how he’s also been on subways before because he went to school in America. Massoud also makes the interesting choice to speak without any sort of continental accent — perhaps it was that American education, or perhaps it’s just an indication of the movie’s overall quality and attention to detail.

That said, the production is almost charmingly budget. They have, it seems, one drone shot of a castle that they use several times. Outside of the castle, there are exactly two streets in Lavania. The “nice” street has a fruit cart and a dinky merry-go-round that wouldn’t pass at a Stars Hollow fair. The downtrodden one looks like it’s been pulled from a regional theater production of Oliver Twist. But again, this movie does not seem to be taking itself seriously. There is a would-be mother-in-law who snaps photos of Izzy getting too cozy with the prince and leaks them to the local paper, which gives it the front-page treatment with the headline: “Italian Tomato Seduces Prince.” The New York papers aren’t much better with the headlines: “Hot Prince Visit Makes Temperatures Rise in the City” is one.

Though there is some fun to be had both intentionally and unintentionally, “The Royal Treatment,” directed by Rick Jacobson and written by Holly Hester, is no “Princess Diaries” — not even close. Nor is it a “good movie” but that also assumes that it’s possible to judge “good” and “bad” in this very strange and specific kind of Hallmark Channel-style modern fairy tale. Like a drug store chocolate bar, it just is. It might not be good for you, but it’ll go down shockingly easy, give you a minor sugar high (and possible headache), and disappear from your memory just as quickly, leaving you defenseless for when the inevitable sequel comes along.

“The Royal Treatment,” a Netflix release available Friday, has not been rated by the Motion Picture Association of America. Running time: 95 minutes. One and a half stars out of four.