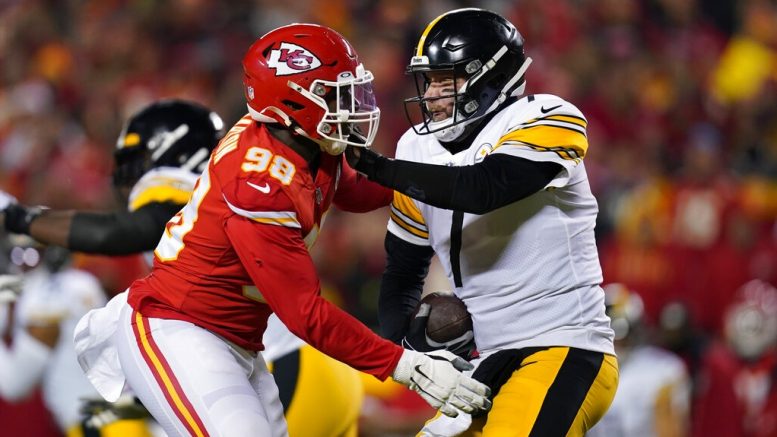 KANSAS CITY, Mo. (AP) — Steelers quarterback Ben Roethlisberger raised some eyebrows ahead of their wild-card game against the defending AFC champion Chiefs on Sunday night when he admitted that “we probably aren’t supposed to be here.”

After taking an early lead on T.J. Watt’s fumble return for a touchdown, the Steelers watched Patrick Mahomes guide the Chiefs to six consecutive touchdown drives. So by the time Roethlisberger finally led Pittsburgh past midfield for the first time, midway through the third quarter, the outcome of what was likely his final game had been decided.

The Chiefs advanced to face Buffalo in the divisional round next Sunday night with a 42-21 blowout of the Steelers.

“I mean, shoot, we thought last week was going to be the end,” Roethlisberger said. “We got blessed to play another football game. Didn’t end the way we wanted it to, but it’s a blessing to play this football game. How lucky are we that we get to play football for a living? We have to count our blessings.”

Still, it was the Steelers’ fourth straight playoff loss — their last win came in the divisional round in Kansas City almost five years ago to the day — and in each they trailed by at least 21 points. Two of those defeats came at home when Pittsburgh was a heavy favorite, including a wild-card loss to the Browns last season.

The difference this time? For Roethlisberger, it appears there won’t be a next time.

The six-time Pro Bowl quarterback, who returned the Steelers to prominence with a pair of Super Bowl wins, made it clear he expects this season to be his last. And if that’s the case, the performance by the 39-year-old Roethlisberger in his 23rd career playoff start — tied for fourth with Joe Montana among all NFL quarterbacks — will be one to forget.

His passes fluttered. They floated. They certainly lacked the zip they had early in his career.

The Steelers went three-and-out on their first three series. They punted on their first seven, a streak only interrupted by Najee Harris losing his first career fumble. Indeed, it wasn’t until there were 6 1/2 minutes left in the third quarter, and the Chiefs already led 35-7, that Roethlisberger even managed to move Pittsburgh past the 50-yard line.

He was actually quite sharp on that drive, hitting all eight of his throws with a TD pass to Diontae Johnson. But the rest of the game, Roethlisberger was about as dull as could be. He was 29 of 44 for 215 yards passing.

“He’s one special, unique guy,” Steelers wide receiver JuJu Smith-Schuster said. “When I first came in, I tell everybody, I used to watch Big Ben and I always wondered what it was like to be in that huddle, to go down field and score the winning touchdown. Fast-forward 10 years and I’m in that huddle. I can give my career to that man, everything he’s done up until now. I appreciate him so much.”

Roethlisberger came into the game with 5,757 yards passing in the postseason, and needed just 99 more to leap Montana and Brett Favre on the career list. But it looked like that would be a stretch at halftime, when the Chiefs were dominating the Pittsburgh offensive line and Roethlisberger was 5 of 14 for 24 yards.

He finally got the yardage he needed on a throw to Chase Claypool with 12 1/2 minutes left in the game. It was good for one more line in his career portfolio that is already full, and just might one day land him in the Hall of Fame.

“I just told him I have so much respect for him,” said Mahomes, who sought Roethlisberger out after the game. “I watched him growing up and the way he plays the game, he competes to the very end. And he did that this whole entire season and who knows what the future is, but it was great to be here and witness him.”

Roethlisberger won 165 games, threw for more than 64,000 yards and kept the success going through hundreds of teammates and plenty of controversy and drama. His career began with winning the AFC Offensive Rookie of the Year award and it ended with Roethlisberger leading a team few thought playoff-worthy to the postseason.

“I will say I’m really proud of the way guys fought,” he said. “We had guys, whether it was linesmen or backs or receivers or tight ends, step up and literally fought to the end. Guys never quit, even to the last second, even when it was out of our grasp. I’m just so proud to call these guys brothers and play for them.”