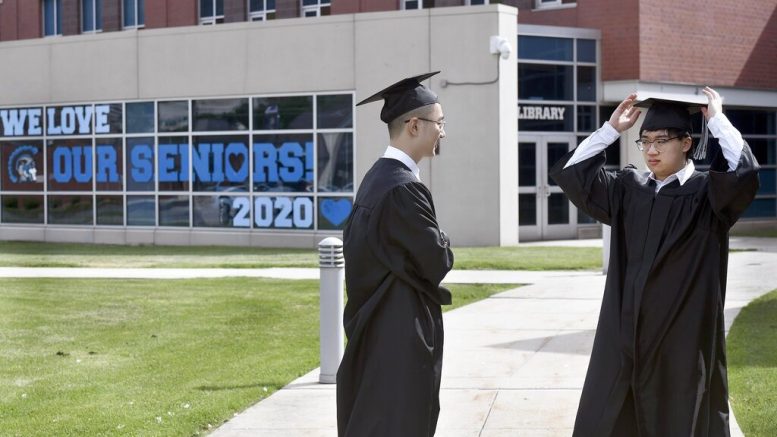 Greater Johnstown High School seniors and international students from China from left to right, Dongsheng Li and William Tang check out their graduation caps and gowns in front of the high school in Johnstown on Wednesday, May 27, 2020. The seniors were getting their picture taken for the virtual graduation that takes place on June 18, due to the COVID-19 pandemic. (AP)

HARRISBURG (AP) — Professional sports can resume in Pennsylvania where the governor’s stay-at-home order to stem the spread of the coronavirus is no longer in force, but without spectators, Gov. Tom Wolf’s administration said Wednesday.

Those teams and competitors will be allowed to practice or play in counties where Wolf’s “yellow” or “green” designation applies in his stoplight-colored three-phase reopening plan.

To resume, a team or a league must develop a coronavirus safety plan that has been approved by Wolf’s state Department of Health and it must include testing or screening and monitoring of all “on-venue” players and personnel, the administration said.

Fans or spectators cannot be permitted inside or outside the sporting venue property, the administration said.

Meanwhile, Wolf lifted some dine-in prohibitions for restaurants and bars in counties in the yellow phase, allowing them to serve people seated in outdoor areas.

His administration also said that, under green-phase guidelines that first take effect Friday in 18 counties, gatherings of more than 250 people are prohibited, including concerts, festivals, conferences, sporting events, movies or performances. Most businesses serving the public in a building or defined area can only operate at up to 50% or 75% maximum capacity, depending on the type of business, while also enforcing social distancing requirements.

Pennsylvania follows New Jersey and New York in allowing pro sports to resume practice and play. Youth sports are allowed to resume in areas in the green phase.

Major League Baseball, the NHL and the NBA have all been on hiatus since mid-March and the NFL has been holding its organized team activities “virtually,” though the reopening means players could potentially participate in person when mandatory mini-camps are held next month.

The NHL announced that it hopes to return at some point this summer with an expanded 24-team playoff format in two host cities.

Pittsburgh is among the finalists to serve as an NHL “hub” and Penguins general manager Jim Rutherford said Wednesday that players will be allowed to work out independently in small groups at the team’s practice facility in Cranberry starting as early as next week. Any official NHL-sanctioned “training camp” would not start before July 1.

Rutherford said the team will be meticulous in following health guidelines whenever players return.

“We are very sensitive to what’s going on and we will be very careful with it,” Rutherford said.

In other coronavirus-related developments in Pennsylvania:

Gov. Tom Wolf’s administration announced a new leader Wednesday at the Southeastern Veterans’ Center, where about three dozen residents have died from the coronavirus and a state senator urged the replacement of its leadership.

The state Department of Military and Veterans Affairs has named an acting commandant at the center, the agency said in a statement. It named Barbara Raymond, the commandant of another state-run veterans’ home, the Pennsylvania Soldiers’ and Sailors’ Home.

Asked about the reasons for the move, Wolf, in a video news conference, only said he was responding to the “general concern” that had been expressed about the situation at the center. He did not elaborate.

The Southeastern Veterans’ Center had been particularly hard hit by the pandemic, with at least 35 residents dying from the virus, according to state data provided last week. The five other state-run veterans homes appear to have been far more successful in keeping the virus out.

However, the scope of the outbreak inside the 238-bed veterans center in Chester County had long been unclear, since Wolf’s administration didn’t report on cases and deaths there until recent days.

A state lawmaker, Sen. Katie Muth, whose district includes the home, had urged state officials to remove its commandant and its nursing director. Staff there has told her of repeated violations of protocol to keep infected patients isolated, which Muth said she blames on mismanagement.

Muth also said staff told her that residents were being given hydroxychloroquine — the anti-malarial drug that President Donald Trump says he is taking to prevent COVID-19, the disease caused by the coronavirus — up until April 22, without consent from a relative. She has passed on information to the state attorney general’s office, Muth said.

Maj. Gen. Tony Carelli, the state veterans affairs secretary, told lawmakers May 6 that he had sought inspections of the Southeastern Veterans’ Center as the death toll rose.

Federal, state and county inspections came back clean and showed the center had sound protocols in responding to the spread of the virus, Carelli told them.

A Pennsylvania state lawmaker said Wednesday he tested positive for COVID-19 and spent the past two weeks in isolation. Rep. Andrew Lewis, R-Dauphin, said in a statement that other members and staff he was in contact with also self-isolated.

Lewis said he kept his positive test a secret out of consideration for his family and others who may have been exposed. He had a fever for a day and a brief cough, but has fully recovered and completed a quarantine period, he said.

Rep. Russ Diamond, R-Lebanon, who sits in front of Lewis in the House chamber, said he was notified of the potential exposure by the human resources department on May 21, shortly after testifying at a legislative committee meeting.

House Democrats reacted to the news with outrage, saying Republicans had hid Lewis’ diagnosis from them.

There were 113 additional deaths linked to the coronavirus in Pennsylvania, raising the statewide total to 5,265, the state reported Wednesday.

Officials also reported that 780 more people have tested positive for the virus.

Since early March, infections have been confirmed in more than 69,417 people in Pennsylvania. Health officials reported that 62% of the people who have tested positive are fully recovered, meaning it’s been more than 30 days since the date of their positive test or onset of symptoms.

The number of infections is thought to be far higher than the confirmed count because many people have not been tested, and studies suggest people can be infected without feeling sick.