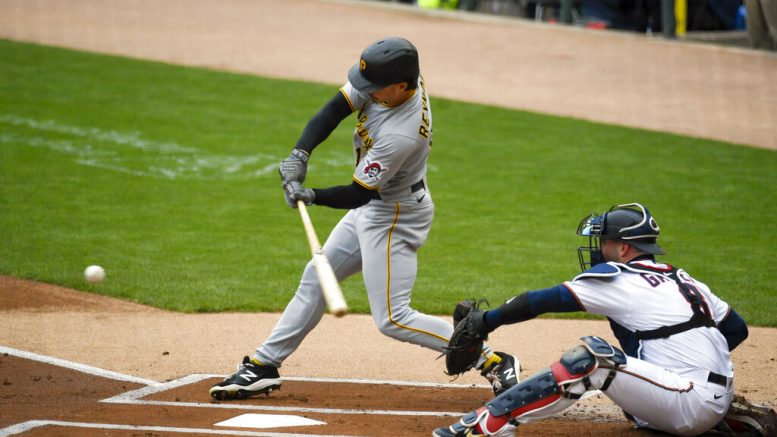 Pittsburgh Pirates Bryan Reynolds hits a double in front of Minnesota Twins catcher Mitch Garver driving in one run during the first inning of a baseball game, Sunday, April 25, 2021, in Minneapolis. (AP)

MINNEAPOLIS (AP) — Gregory Polanco homered and had three hits, Clay Holmes and the bullpen held down the scuffling Twins and the Pittsburgh Pirates completed a successful trip by beating Minnesota 6-2 Sunday.

Starter Wil Crowe, activated before the game, allowed one run and four hits but needed 81 pitches to get through four innings.

Holmes (1-0) pitched 1 1/3 hitless innings for his first win since July 2, 2019, against the Chicago Cubs. Sam Howard got two outs, Chris Stratton allowed Nelson Cruz’s seventh homer in a three-hit eighth and David Bednar struck out two in a perfect ninth.

“This was a big road trip for us,” said Bryan Reynolds, who had two hits. “The ultimate goal is to win and that comes from doing the little things right. I feel we played good defense had timely hitting and threw the ball well. Not much more you can ask for.”

Minnesota has lost 11 of 13 and its seven wins are tied with Detroit for fewest in the American League.

“I think the guys all have to understand we’re not going to get it all back on one swing or one at-bat,” Twins manager Rocco Baldelli said. “We’re going to have to take what the other teams are giving us and just go out there and grind it out.”

Matt Shoemaker (1-2) allowed two runs and six hits in 5 1/3 innings. Called up from the team’s alternate training site, Cody Stashak gave up three runs in two-thirds of an inning. The right-hander has allowed seven earned runs in 5 2/3 innings this season.

Adam Frazier also had three hits for the Pirates, who have won five of seven.

Reynolds’ RBI double and Colin Moran’s sacrifice fly put the Pirates ahead in the first. Byron Buxton’s run-scoring single cut the lead in half in the bottom of the inning, but Pittsburgh broke open the game with a three-run seventh, when Kevin Newman and Frazier hit RBI singles and Reynolds hit his second RBI double.

Polanco homered in the eighth against Jorge Alcalá.

Crowe snared a comeback liner in the first and doubled Buxton off first.

“That was a big momentum swing for me,” Crowe said. “I knew he was either going to pull into the shift or hit it right back up the middle. I was kind of anticipating. Just glad it didn’t hit me.”

Pirates’ 3B Erik González dove to his right, landed on his chest, quickly got to his feet and easily threw out Josh Donaldson in the third.

Pirates: To make room for Crowe, RHP Geoff Hartlieb was optioned to the alternate training site.

Twins: Stashak was recalled from the alternate training site to replace LHP Devin Smeltzer, who pitched 4 2/3 innings Saturday and was optioned.

Twins: SS Andrelton Simmons, out with COVID-19 since April 14, worked out again Sunday and will travel with the team for its series that begins Monday in Cleveland. “We could see him back soon,” Baldelli said.