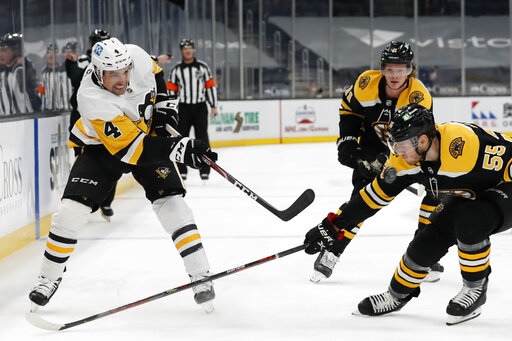 BOSTON (AP) — Mike Matheson scored a highlight-reel goal after a lengthy rush, and the surging Pittsburgh Penguins ended a long winless drought in Boston with a 4-1 victory over the Bruins on Thursday night.

Zach Aston-Reese, Jason Zucker and Jake Guentzel also scored for the Penguins, who won their fifth straight game and improved to 11-2-1 in their last 14. Casey DeSmith stopped 30 shots.

“I think I was actually at that game when I was in college. My dad got me tickets,” said Aston-Reese, who attended nearby Northeastern. “I know it’s been a long time. We talked about it. I know a lot of guys changed things up, got coffees at different spots. We tried everything.”

The Bruins had gone 12-0-1 in their last 13 games in TD Garden against the Penguins.

“Those are one of those streaks that everyone is aware of,” Zucker said.

“It’s nice to get a win here,” Penguins coach Mike Sullivan said. “I just think it was an overall complete game.”

Brad Marchand scored his 14th goal and rookie goalie Dan Vladar stopped 19 shots in his third career start for Boston, which had earned at least a point in five of its previous six games (4-1-1).

Coming off an NHL-best 12-3-1 record in March, Pittsburgh took a 1-0 edge on Aston-Reese’s goal 2:01 into the second period. Brandon Tanev sent a backhand pass across from the right wing that got through to Aston-Reese near the top of the crease, where he redirected it past Vladar.

The score came about a minute after Vladar dropped to make a pad stop on Jared McCann’s clean breakaway.

Matheson’s goal made it 2-0 at 13:12 of the second. He collected the puck near the defensive zone, skated down the right wing around Bruins defenseman Jeremy Lauzon before shifting the puck from his backhand to forehand and slipping it into the net just by Vladar’s right skate.

“I can’t remember,” said Matheson when asked if he recalled scoring a goal like that in TD Garden while playing collegiate hockey at Boston College. “The things I remember most playing at BC was winning a couple of Beanpots in this building.”

Zucker had the best scoring chance in a scoreless first period, skating in on a breakaway before sending a backhander over the net with just under 3 minutes left.

“We just, I think, at times make it tougher on ourselves than we need to,” Marchand said.

ROLLING BACK THE CLOCK

Boston star forward David Pastrnak, then 18-years-old, made his NHL debut when the Penguins won their last game in Boston. On that same night, then-Penguins goaltender Marc-Andre Fleury won his 300th career game.

Cassidy called out the players on his fourth line after the victory Tuesday, saying they needed to provide more energy and physicality.

He explained why he did it in Thursday morning’s media videoconference.

“I don’t think any player or any person, in general, wants to get called out in the media,” he said. “I’ve used it when I feel it will get across. Everything you’ve heard, I’d say 95% of it has gone through the player already.”

Pittsburgh opened a stretch of six straight on the road and eight of its next nine.

Boston played the fifth of a franchise-record tying seven-game homestand.

The teams meet against in Boston on Saturday afternoon.