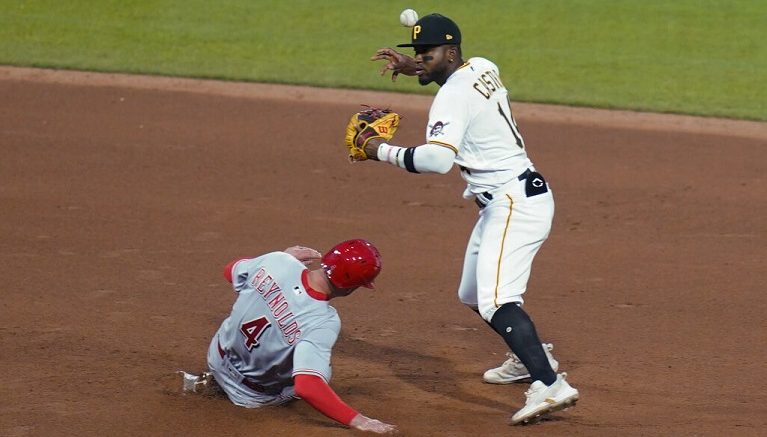 Pittsburgh Pirates shortstop Rodolfo Castro, right, loses the ball after forcing out Cincinnati Reds' Matt Reynolds (4) at second during the seventh inning of a baseball game on Thursday, May 12, 2022, in Pittsburgh. TJ Friedl was safe at first. (AP)

PITTSBURGH (AP) — Connor Overton got his first major league win and combined with two relievers on a four-hitter for the Cincinnati Reds’ first shutout of the season, a 4-0 win over the Pittsburgh Pirates on Thursday night.

A 2014 amateur draft pick who debuted last August with Toronto, Overton (1-0) was claimed by the Pirates in September and made five appearances for Pittsburgh. He became a free agent after he refused an outright assignment, and he signed with the Reds on a minor-league deal in November.

“It was nothing I haven’t experienced before,” said Overton, who spent two stints in independent ball before making it to the majors. “I didn’t really dwell on it. I kind of just put my head down and kept working.”

He allowed three hits and four walks in 6 1/3 innings with one strikeout. The 28-year-old right-hander got nine outs on ground balls.

“I’m trying to be efficient, fill up the zone, let the ball be put into play, and let the defense work,” Overton said.

He threw 50 of 91 pitches for strikes. Cincinnati manager David Bell said the efficient approach allowed him to let Overton become the first Reds starter this year to pitch into the seventh inning.

Luis Cessa got five straight outs and Art Warren pitched around a leadoff single, getting Daniel Vogelbach to ground into a game-ending double play.

Cincinnati has the worst record in the major leagues at 8-24; the Reds are 3-1 against Pirates and 5-23 against other teams.

Tyler Stephenson hit a second-inning single that drove in Mike Moustakas, who led off with a double, and hit a 401-foot home run into the left-field bleachers in the fourth. Stephenson had three hits, raising his batting average to .349.

Colin Moran and Tyler Naquin hit RBI singles in the eighth off Duane Underwood Jr., who was activated from the 10-day injured list following a right hamstring strain that had sidelined him since April 8.

Cam Alldred, a 25-year-old left-hander, made his MLB debut for the Pirates in the sixth. Alldred retired Moustakas on a popout, threw a called third strike past Stephenson, and retired Moran on a groundout. Alldred gave up a leadoff single in the seventh to Naquin, then was replaced by Heath Hembree.

“It was unbelievable. A lot of emotions going through my body,” Alldred said. “ I was really happy to see my family and friends come out and support me.”

A Batavia, Ohio native, Alldred pitched for the University of Cincinnati from 2016-18. He was called up to the majors for the first time on Wednesday.

“I was fired up to see that we were playing (the Reds) next,” he said. “That was pretty cool to open against them.”

Reds: RHP Lucas Sims (back spasms) was placed on the 15-day

Pirates: OF Jake Marisnick had left thumb surgery and will miss four to six weeks.