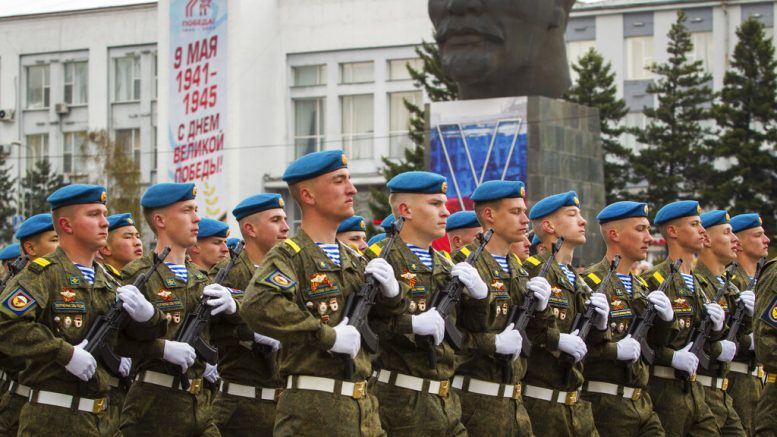 Russian servicemen march during the Victory Day military parade in Ulan-Ude, the regional capital of Buryatia, a region near the Russia-Mongolia border, Russia, on Monday, May 9, 2022, marking the 77th anniversary of the end of World War II. (AP)

ZAPORIZHZHIA, Ukraine (AP) — Russian President Vladimir Putin used a major patriotic holiday Monday to again justify his war in Ukraine but did not declare even a limited victory or signal where the conflict was headed, as his forces pressed their offensive with few signs of significant progress.

The Russian leader oversaw a Victory Day parade on Moscow’s Red Square, with troops marching in formation, military hardware on display, and a brass band blaring to mark the Soviet Union’s role in the 1945 defeat of Nazi Germany.

But his much-anticipated speech offered no new insights into how he intended to salvage the grinding war — and instead stuck to allegations that Ukraine posed a threat to Russia, even though Moscow’s nuclear-armed forces are far superior in numbers and firepower. He steered clear of battlefield specifics — failing to mention the potentially pivotal battle for the strategically vital port of Mariupol or even uttering the word “Ukraine.”

Putin has long bristled about NATO’s gradual creep eastward, including into former Soviet republics, and sought to justify Russia’s invasion of Ukraine before an “inevitable” clash. Ukrainian leaders and their Western backers have often rejected claims that Kyiv or NATO posed any threat to Russia — but tensions could rise further if Sweden and Finland decide to join the Western alliance, as support for that increases in both countries.

“The danger was rising by the day,” Putin said as he surveyed the troops. “Russia has given a pre-emptive response to aggression. It was forced, timely, and the only correct decision.”

He also sought to portray the current battle for the Donbas — Moscow’s focus after its early failure to sweep across Ukraine and overrun the capital — as a fight on “historic lands” of Russia. But even in that region, where some thought Russia would finally see some decisive victories, progress has been slow going.

Many analysts had suggested Putin might use his speech to declare some sort of limited victory — potentially in Mariupol — as he looks for an exit from the conflict that has unleashed punishing sanctions from the West and strained Russia’s resources. Others suggested he might order a nationwide mobilization to beef up the depleted ranks for an extended conflict. Neither was forthcoming.

Critics said the speech skirted some uncomfortable realities that Putin is facing: The campaign in Ukraine isn’t going to plan, and he has not asked Russians to accept sacrifices necessary to weather a squeeze of economic sanctions and diplomatic isolation. He also left unanswered the looming question of whether Russia will mobilize more forces in the face of significant losses.

“Without concrete steps to build a new force, Russia can’t fight a long war, and the clock starts ticking on the failure of their army in Ukraine,” tweeted Phillips P. O’Brien, professor of strategic studies at the University of St. Andrews.

As Putin laid a wreath in Moscow, air raid sirens echoed again in Kyiv, the Ukrainian capital. But Ukrainian President Volodymyr Zelenskyy declared in his own Victory Day address that his country would eventually defeat the Russians.

“Very soon there will be two Victory Days in Ukraine,” he said in a video released to mark the holiday. “We have never fought against anyone. We always fight for ourselves. … We are fighting for freedom for our children, and therefore we will win.”

But the Ukrainian military’s General Staff warned Monday of a high probability of missile strikes on the holiday, and Britain’s Defense Ministry said in its daily assessment that Russian forces could increasingly subject Ukrainian towns and cities to “intense and indiscriminate bombardments with little or no regard for civilian casualties” as they run short of precision-guided munitions.

In fact, more than 60 people were feared dead after a Russian bomb flattened a Ukrainian school being used as a shelter in Bilohorivka, an eastern village, Ukrainian officials said.

In a sign the anti-Russian backlash could be growing in Europe, protesters threw what appeared to be red paint at Russia’s ambassador to Poland, Sergey Andreev, as he arrived at a cemetery in Warsaw to pay respects to Red Army soldiers who died during World War II.

With the war now in its 11th week, battles were being waged on multiple fronts, but Russia was perhaps closest to victory in Mariupol, where Ukrainian fighters are making a last stand at a sprawling steel mill in a battle that has highlighted some of the worst suffering of the war.

The complete capture of Mariupol would deprive Ukraine of a vital port, allow Russia to complete a land corridor to the Crimean Peninsula, and free troops up for fighting elsewhere in the Donbas. The fall of the city would also provide a much-needed symbolic victory for Russia.

Russian forces pounded away over the weekend at the plant, where as many as 2,000 Ukrainian fighters are estimated to be holding out.

“We are under constant shelling,” said Capt. Sviatoslav Palamar, deputy commander of the Ukrainian Azov Regiment, which held the mill.

Lt. Illya Samoilenko, another regiment member, said a couple hundred wounded soldiers were inside. He declined to say how many able-bodied fighters remained. He said fighters had to dig by hand to free people from bunkers that collapsed under shelling.

For weeks, hundreds of civilians also took shelter with the fighters at the plant, but Ukrainian and Russian officials said the last were evacuated Saturday. In a convoy led by the United Nations and international Red Cross, they arrived Sunday night in Zaporizhzhia, the first major Ukrainian city beyond the frontlines. They spoke of constant shelling, dwindling food, ubiquitous mold — and using hand sanitizer for cooking fuel.

The Ukrainian military warned Russian troops were seizing “personal documents from the local population without good reason” in parts of the Zaporizhzhia region that they controlled — allegedly as a way to force residents to join in Victory Day commemorations.

Moscow has scaled back its war ambitions as a stiffer-than-expected Ukrainian resistance — bolstered by Western arms — has bogged down Russian forces. Its focus now is on offensives in areas of southern Ukraine and eastern Donbas, where Moscow-backed separatists have fought Ukrainian troops for years. In recent weeks, Ukrainian and Russian forces have fought village by village.

The southern Black Sea port of Odesa has seen increased bombardments recently, and Ukrainian officials said Russia fired four cruise missiles targeting the city Monday from Crimea. It said no civilians were wounded in the attack, but did not elaborate on what was struck.

“The enemy continues to destroy the infrastructure of the region and exert psychological pressure on the civilian population,” the command said. “There is a very high probability of continued missile attacks in the region.”

Hours later, the president of the European Council, Charles Michel, announced that he had visited the city — the latest in a series of high-profile visits to Ukraine.

Russian forces have repeatedly shelled cities and towns indiscriminately. About 90 people were sheltering in the school basement in Bilohorivka when it was attacked Saturday. Emergency crews found two bodies and rescued 30 people, but “most likely all 60 people who remain under the rubble are now dead,” Serhiy Haidai, governor of Luhansk province, wrote on the Telegram messaging app.

Ukraine’s military also warned some 19 Russian battalion tactical groups were stationed just across the border in Russia’s Belgorod region. Those groups likely consist of some 15,200 troops with tanks, missile batteries, and other weaponry.