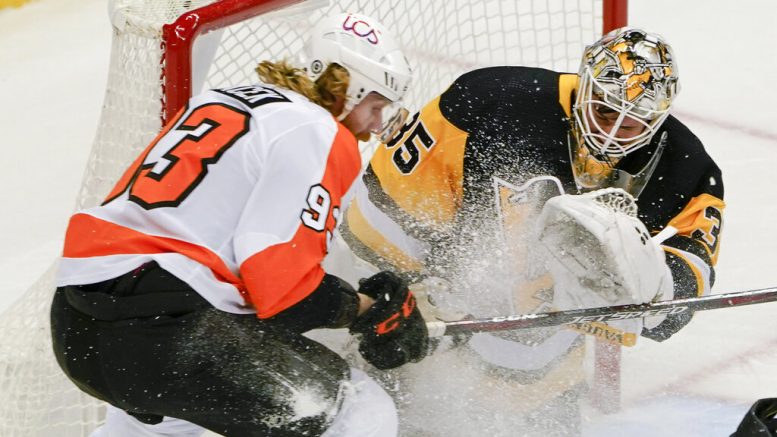 PITTSBURGH (AP) — Jared McCann has always possessed the skills required to be a difference-maker at both ends of the ice. The trouble for the Pittsburgh Penguins versatile forward is consistency. Sometimes he looks like one of the better 200-foot players in the NHL. Sometimes he can disappear for long stretches.

Not so much at the moment, however.

McCann pounced on a rebound and knocked it past Bryan Elliott with less than 10 minutes to go and the Pittsburgh Penguins slipped past the Philadelphia Flyers 4-3 on Saturday. McCann’s fifth goal of the season and third in five games since a two-week absence due to a lower-body injury helped the Penguins beat the Flyers for the second time in five days and draw even with their cross-state rivals in the highly competitive East Division.

“I think he’s trying to do the little things well,” Penguins head coach Mike Sullivan said. “He’s trying to get himself into the areas where he gets looks … And like any player, when the puck goes into the net it’s good for their confidence.”

McCann certainly looked confident while racing through the slot during a rush, and found the game-winner on his stick after Brandon Tanev’s shot smacked off Elliott’s pad. McCann fired it into the net, then went skates over skull after tripping over Elliott.

Zach Aston-Reese, Bryan Rust and Evgeni Malkin also scored for Pittsburgh. Tristan Jarry finished with 19 saves as the Penguins responded after letting an early three-goal lead slip away in a loss to the Flyers on Thursday night.

“I think that’s a great team win tonight,” said Tanev, who finished with two assists. “Obviously, the result the other night was was not what we wanted. There were times today when we were up and down, but we came out and had a strong third period and got it done.”

Travis Konecny, Kevin Hayes and Shayne Gostisbehere scored for the Flyers. Elliott made 23 stops but couldn’t beat Pittsburgh for the second time in three days.

“They made us pay on a couple of our mistakes and we were right there,” Philadelphia coach Alain Vigneault said. “But we made one mistake too many that cost us the game.”

There was the expected chippiness that comes when teams face each other three straight times, including an extended tussle in the second period in between the benches that involved Malkin, Pittsburgh defenseman Kris Letang and James van Riemsdyk, among others, with Letang and van Riemsdyk getting minor penalties.

“I think what you’ll find is that the intensity in the game is starting to heighten just by the nature of the standings being so close and there (are) less games to (fight) for playoff position,” Sullivan said.

BACK IN (ORANGE AND) BLACK

Philadelphia’s Joel Farabee played 17:47 after sitting out Thursday night’s game when he was placed on the COVID-19 protocol list. Farabee, tied for the team lead with 10 goals, was not credited with a shot.

“I mean, obviously, we want to come in here and sweep all three games, but it’s a pretty tough league,” Farabee said. “They’re a really good team. … I thought we gave a pretty good effort. I thought that third period could’ve went either way. We have some things to clean up.”

BACK IN (GOLD AND) BLACK

Penguins defenseman Brian Dumoulin (15 games) and forward Evan Rodrigues (16 games) both returned to the lineup after extended absences due to injury. Dumoulin played 23:46 while Rodrigues skated 10:39.

Dumoulin called it a “long” 5 1/2-week break, one he’s happy to have in the rearview mirror.

“I felt good out there,” Dumoulin said. “Obviously, as the game went on you feel a bit better … I just had to remember to tell myself to keep moving.”

Philadelphia’s Jakub Voracek collected the 500th assist of his career when he helped set up Gostisbehere’s long shot from the point in the second period. The 31-year-old has been particularly productive when facing the Penguins. His helper gave him 47 points (23 goals, 24 assists) in 48 regular-season games against Pittsburgh.

Flyers: Welcome the Washington Capitals to the Wells Fargo Center on Sunday. A limited number of fans will be allowed in, the first time Philadelphia will play in front of a home crowd since a 2-0 loss to Boston on March 10, 2020.

From staff reports The state departments of Education, Agriculture and Human Services have announced thousands of students and families in need will continue to receive…

WASHINGTON (AP) — Controlling Congress and the White House for the first time in a decade, Democrats were hopeful that this would be the year…

NEW YORK (AP) — Taylor Sheridan, initially brought on to rewrite the mountain thriller “Those Who Wish Me Dead,” gradually got more invested in the…

Hi! My name is Tyah – but you can call me Ty! I am a one-year-old spayed female Lab/Pit Bull mix. I am a big…

(Family Features) From little ones learning the game to professional athletes pushing sports to new levels, nutrition impacts the ability to re-energize, stay hydrated, and…

From staff reports Free food boxes will be given to families in the Oil City Area School District through a “Farmers to Families” program. The…

From staff reports Drake Well Museum and Park will provide free admission to people who are serving in the U.S. military and their families as…

BOISE, Idaho (AP) — A sixth-grade girl brought a gun to her Idaho middle school, shot and wounded two students and a custodian and then…

PITTSBURGH (AP) — In the final days of a 16th season that came in the form of a 56-game sprint and included a cross-country trade,…

The Associated Press Jason Statham says very, very little in his new film. The English actor must have only needed to memorize about three pages…

Hi! My name is Chewey! I am a 7-year-old neutered male Shepherd mix! I’m a big boy weighing 65 pounds! I love love love my…