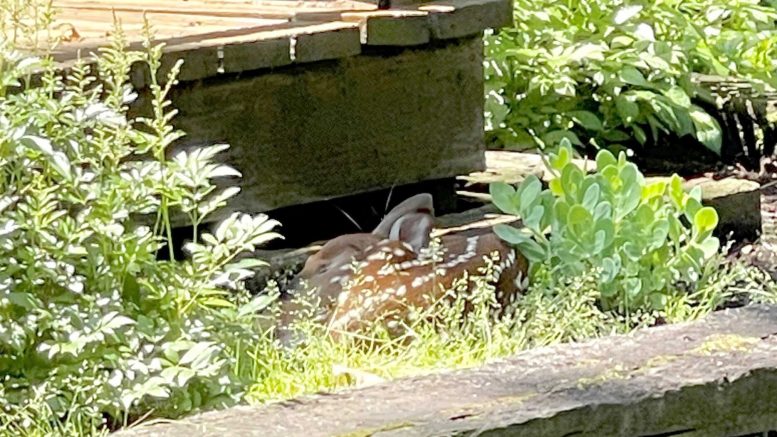 John Flynn, who resides on West Sixth Street in Oil City, found a surprise in his flower bed on Thursday morning. A mother deer dropped her fawn off while she likely spent the day foraging. (By Stacey Gross)

Keep your eyes peeled among the rose bushes this week, and you might find a fawn hidden in them.

That’s what John Flynn found in his flower bed on Thursday morning. Flynn, who resides on West Sixth Street in Oil City, was surprised by his discovery. Jason Amory, Pennsylvania Game Commission information and education director, was less so.

Information on the Game Commission’s website says deer fawn anytime between April and August, but Amory says the deer in Venango County tend to fawn mostly within the first two weeks of June.

“It can be anywhere within a few weeks, before or after,” Amory said.

But, he said, if you think of fawning season like a bell curve, we’re directly in the mean right now. And, if you have been seeing more deer during commutes lately, fawns could be at least part of the reason for that as well.

Although many people think of a doe with a single fawn, Amory said, it’s common for deer to carry multiple fawns to term – about 200 days. It’s only when the environment isn’t at its best for deer during fawning season that multiples drop off.

“If we’ve had a poor mass crop, without a lot of the acorns and new growth,” more single fawns can be expected.

But, he said, whether it’s one fawn or multiples, pregnant and recently postpartum deer need more calories, which means they’re moving around the woods – and roads – more than usual in search of them.

They often, Amory said, scout out safe spots to leave their fawns in the days after giving birth. Fawns have “no real scent” immediately after birth, and much less scent than an adult deer during their first several weeks of life.

So, does leave them behind while they brave the predators, and traffic, to forage.

“They’ll sit tight,” Amory said. “They won’t move and they won’t flee from their spot most times.”

The main predators fawns need to worry about, Amory said, are black bears followed by coyotes.

“Bear will actually zig-zag a field,” looking for a fawn hidden among the tall grass, he said.

While a doe could leave her fawn behind “for most of the day,” Amory said, “People always think they’re abandoned. They’re not abandoned, and people should leave them.” Moving a fawn means the doe will be unlikely to find it when she returns.

Most of the wildlife people are going to find around their homes, Amory said, are fine on their own.

If you find something that clearly needs help, only wildlife rehabilitators licensed through the Game Commission are allowed to treat them, according to Amory.

A list of wildlife rehabilitators can be found at www.pawr.com.