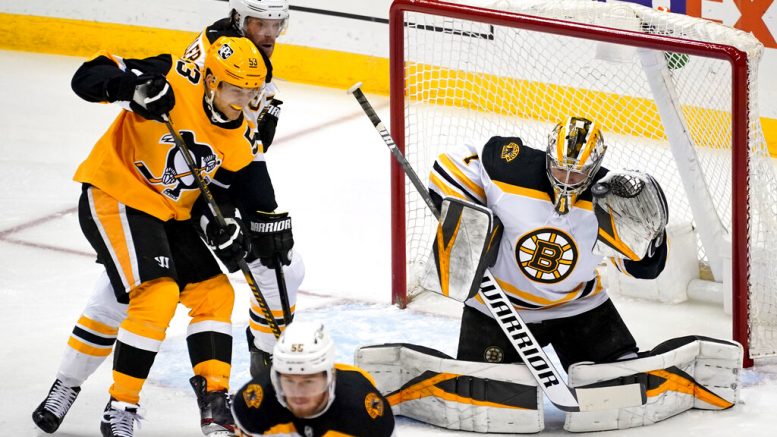 That message was received.

Tristan Jarry made 29 saves for his first shutout of the season and Jake Guentzel scored in the Penguins’ 1-0 victory over the Boston Bruins on Sunday.

Jarry has won his last four decisions, including a sloppy 7-6 home victory over New Jersey last week, in which he allowed six third-period goals. He rebounded two nights later against the Devils and has earned a point in 11 of his last 12 starts.

“It’s a short season and you play a lot of games,” Jarry said. “It’s a matter of being prepared for the next game.”

Guentzel scored his 21st at 4:03 of the third period to help the Penguins win their fourth straight.

Bryan Rust and Brian Dumoulin made plays at the blueline and along the wall to keep the puck in the zone and get it to Sidney Crosby near the goal-line. Crosby set up Guentzel, who ripped a high slap shot past Jeremy Swayman’s glove from the left faceoff dot.

“That was a goal-scorer’s goal,” Sullivan said. “It was a great set up by (Crosby). Jake has the ability to do that for us.”

Swayman stopped 28 shots for the Bruins. They lost their second straight following a season-long six-game win streak. The Bruins have nine wins in their last 14 games.

Swayman, the top college goaltender last season for Maine, has allowed more than two goals only once in his first seven NHL starts. In his past three appearances, Swayman has stopped 82 of 84 shots, including a shutout. Swayman is the fourth Boston goaltender the Penguins faced this season.

“Those are crucial points and it was a tight game all around,” Swayman said. “It’s what we’re going to expect in a couple of weeks. It was a fun game to be part of, but just disappointed that we didn’t come out with the two points.”

Pittsburgh and Boston are battling for two of the top four spots in a tightly contested East Division.

The Penguins, who are in sole possession of first place, have a two-game series against the Washington Capitals after Tuesday’s home game against the Bruins. Pittsburgh’s next three games are against teams jockeying for top-four positioning in the standings.

“It’s two teams trying to fight for the playoffs just to get in,” Guentzel said. “These are two crucial points, and Tuesday is another big one for us. We have to make sure we’re ready.”

The Penguins and Bruins played a 0-0 game through two periods.

Both teams had 10 shots in the first period, but Pittsburgh outshot Boston, 11-8, in the second, as the Penguins started to gain control in the later stages of the period. Boston blocked 10 shots, while the Penguins had six blocks and neither team went on the power play in the first two periods.

Guentzel and Rust nearly tucked a puck inside the post off the rush for Pittsburgh in the second, while Jarry denied a quality Craig Smith one-timer in the final minute of the period.

“Our work ethic was OK,” Bruins’ coach Bruce Cassidy said. “We didn’t manage the puck great early on, but we fixed that. Both teams had to work for every inch of ice out there.”

CROSBY SECOND AGAINST THE B’S

Crosby passed Jaromir Jagr for the second-most points all-time by a Penguins’ player against Boston.

On Saturday, in a win against New Jersey, Crosby joined Wayne Gretzky as the only players in NHL history to register a point-per-game season in each of their first 16 years in the league. He also passed Lemieux and Evgeni Malkin for the most 20-plus goal seasons in franchise history.