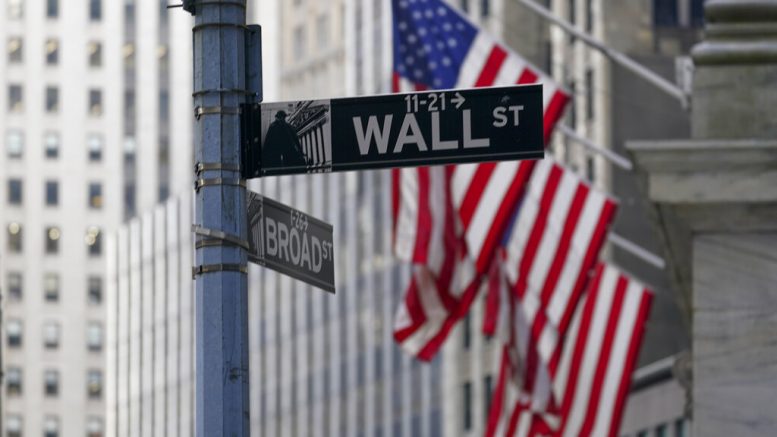 The Wall St. street sign is framed by the American flags flying outside the New York Stock exchange Friday, Jan. 14, 2022, in the Financial District. (AP)

NEW YORK (AP) — U.S. markets pointed toward a sharply lower open, following a global plunge in stocks and a surge in oil prices Thursday after Russian President Vladimir Putin launched military action in Ukraine, prompting Washington and Europe to vow sanctions on Moscow that may roil the global economy.

Oil prices jumped by more than $7 per barrel and futures for Wall Street’s benchmark S&P 500 index and the Dow Jones Industrial Average were off by more than 2.5%.

Market benchmarks in Europe and Asia fell as much as 5% as traders tried to figure out how large Putin’s incursion would be and the scale of Western retaliation.

Energy prices surged, fueling inflation fears. The spot price in Europe for natural gas, for which the continent relies on Russia to supply, jumped as much as 31%.

Brent crude oil jumped above $100 per barrel in London for the first time since 2014 on unease about possible disruption of supplies from Russia, the No. 3 producer. Benchmark U.S. crude was close behind at $99 per barrel. Prices of wheat and corn also jumped.

The ruble sank as much as 7.5% against the dollar overnight but recovered slightly, down about 5% in the morning.

Financial markets are in a “flight to safety and may have to price in slower growth” due to high energy costs, Chris Turner and Francesco Pesole of ING said in a report.

In Brussels, the president of the European Commission said Thursday the 27-nation European Union planned “massive and targeted sanctions” on Russia.

The FTSE 100 in London fell 3.3% after Europe awakened to news of explosions in the Ukrainian capital of Kyiv, the major city of Kharkiv, and other areas. The DAX in Frankfurt plunged 5.4% and the CAC in Paris lost 4.9%.

Moscow’s stock exchange briefly suspended trading on all its markets on Thursday morning. After trading resumed, the ruble-denominated MOEX stock index tumbled more than 20% and the dollar-denominated RTS index plunged by more than a third.

That was on top of Wednesday’s 1.8% slide for the S&P 500 to an eight-month low after the Kremlin said rebels in eastern Ukraine had asked for military assistance. Moscow had sent soldiers to some rebel-held areas after recognizing them as independent.

Some analysts expect the conflict to push investors out of many tech stocks, with the exception of the cybersecurity sector.

“Growing concern that massive cyber warfare could be on the near-term horizon which would certainly catalyze an increase in spending around preventing sophisticated Russian-based cyber attacks,” analysts with Wedbush Securities wrote in a note to clients.

Putin said Russia had to protect civilians in eastern Ukraine, a claim Washington had predicted he would make to justify an invasion.

President Joe Biden denounced the attack as “unprovoked and unjustified” and said Moscow would be held accountable, which many took to mean Washington and its allies would impose additional sanctions. Putin accused them of ignoring Russia’s demand to prevent Ukraine from joining NATO and to offer Moscow security guarantees.

The price for oil on international markets rose to $101.27, while West Texas Intermediate soared $7.65 to $99.75 per barrel in electronic trading on the New York Mercantile Exchange. The contract fell 25 cents to $92.10 on Wednesday.

Asian economies face lower risks than Europe does, but those that need imported oil might be hit by higher prices if Russian supplies are disrupted, forecasters say.

Investors already were uneasy about the possible impact of the Federal Reserve’s plans to try to cool inflation by withdrawing ultra-low interest rates and other stimulus that boosted share prices.