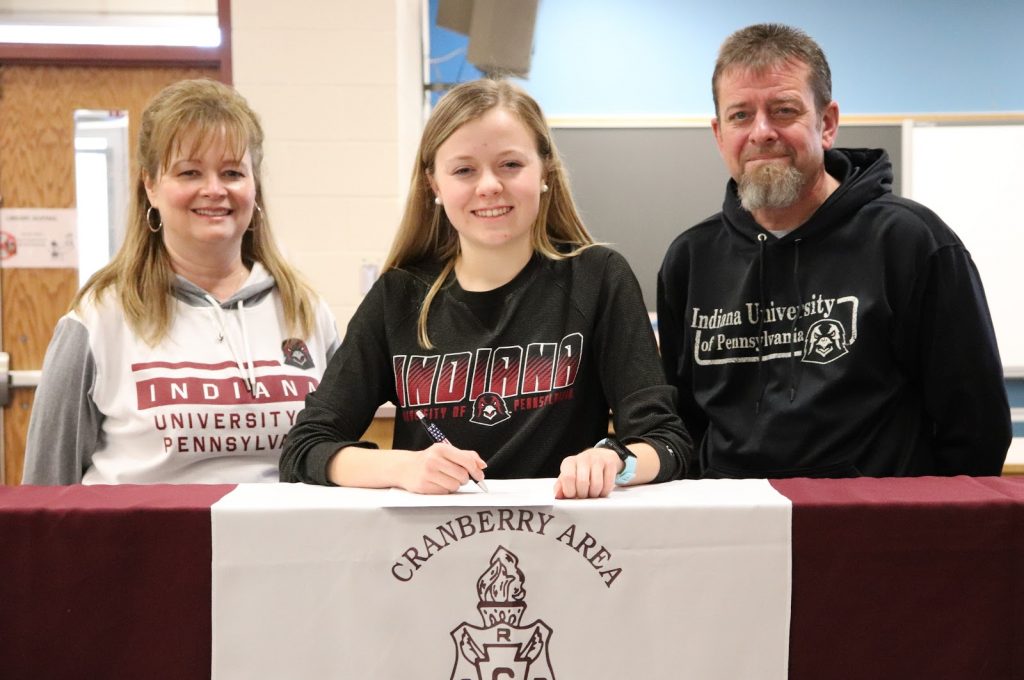 Kalynne Ziegler, a Cranberry High School senior, signs a letter of intent with IUP alongside her mother, Wendi, and father, Bryan. (By Alaina Olson/Student contributor)

By NATALIE SANDROCK and HANNAH NIEDERRITER

Kalynne Ziegler, a Cranberry High School senior, signed a letter of intent Jan. 14, 2021, with Indiana University of Pennsylvania’s Division II Cross Country team. She will start training for the fall season over the summer and officially begin training on campus in August.

Ziegler is able to run a 5K in under 21 minutes, an achievement she says has helped get her to this point. Along with this accomplishment, Ziegler says that she couldn’t have gotten to this point without the support of her parents, the assistance from all the coaches she’s had while running for Cranberry, and her faith.

Ziegler’s former cross country coach of five years, Andi Barrett, has had the pleasure of watching Kalynne develop her skills over the years.

“It has truly been her passion, determination and relentless work ethic that has gotten her to the amazing level of running she has displayed during her time here over the years at Cranberry… I have such respect for the knowledge she has acquired on her own about the sport and the passion and commitment she has shown every hour of every day. I am so excited for her to pursue something I know she genuinely loves with all her heart at the collegiate level.”

As for her past successes, Ziegler has earned numerous medals at notable XC invitationals, placing highly amongst hundreds of other girls. Earning both First-Team all KSAC and Conference MVP honors, Ziegler has also been the KSAC Overall Champion while finishing in the top ten at the district level ever since her freshman year, the highest being second place overall. Being one of the top runners who has come through Cranberry, Ziegler has qualified for and made annual trips to the state meet.

Reflecting on what she has managed to achieve, Ziegler wanted to thank her dad, mom, “mimi,” “papa,” sister, and uncle for the limitless support they’ve given.

Ziegler’s father Bryan explained that the signing has “been a life goal” and her mother, Wendi, said that she is “very excited [for Kalynne] to start a new chapter.”

Kalynne Ziegler will be competing as a Crimson Hawk in the PSAC Conference. Aside from running, she will be majoring in Health and Physical Education at IUP.