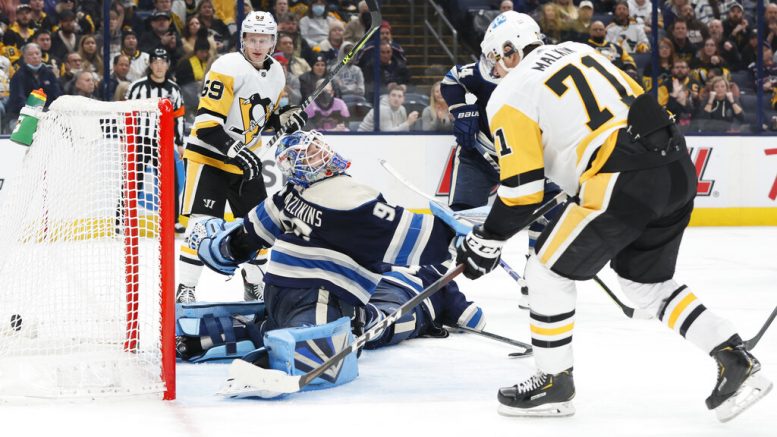 COLUMBUS, Ohio (AP) — Sidney Crosby scored with 2:14 left to rally Pittsburgh over the Columbus Blue Jackets 3-2 Sunday night and bolster their hold on second place in the Metropolitan Division.

“I just loved our resilience tonight,” Penguins coach Mike Sullivan said. “It was a hard-fought game… There’s a certain confidence level that you know they’re going to score. We can feel it on the bench. ”

The Penguins increased their lead over the third-place Rangers to three points. New York lost 5-2 at home to Vancouver.

Bjorkstrand put Columbus up first with a one-timer off a pass from Roslovic at 4:44 of the first, marking his 100th career goal.

Ruhwedel knotted the score 1-1 with just 49 seconds left in the opening period, catching Merzlikins off balance for his second goal this month after going scoreless for the season.

Roslovic put the Blue Jackets ahead with his ninth at 8:39 of the second.

“The guys played real hard,” Blue Jackets coach Brad Larsen said. “I thought they had a real good effort tonight. It was a tight game.”

Malkin tied the score and extended his point streak to five games with a power-play goal off tic-tac-toe passing in front of Merzlikins at 11:54 of the third. Of Malkin’s nine goals, six of them have come with a man advantage.

“We (knew we) just had to keep our foot on the gas,” Rust said. “We couldn’t take too many risks, couldn’t lose our game. We kind of just knew that if we stuck with it, we were going to break through.”

Crosby made Pittsburgh a winner, surviving a coach’s challenge at 17:46 of the third.

“That was a huge win,” Penguins defenseman Mark Friedman said. “For us to come back and show the grit we did in the third was pretty special.”

With his goal, Crosby took over sole possession of 25th place on the NHL’s all-time points list. Bjorkstrand joined the Blue Jackets 100 goal club with his first-period score. Roslovic, a Columbus native, played his 100th game in a Blue Jackets sweater.

“Every milestone is a good feeling,” Bjorkstrand said. “It would have been better with a win.”

The Penguins remain of the league’s best road teams, boasting an 18-6-3 record for 39 points.

After playing seven of their last nine games on the road, the Blue Jackets will play six of the next seven at Nationwide Arena.