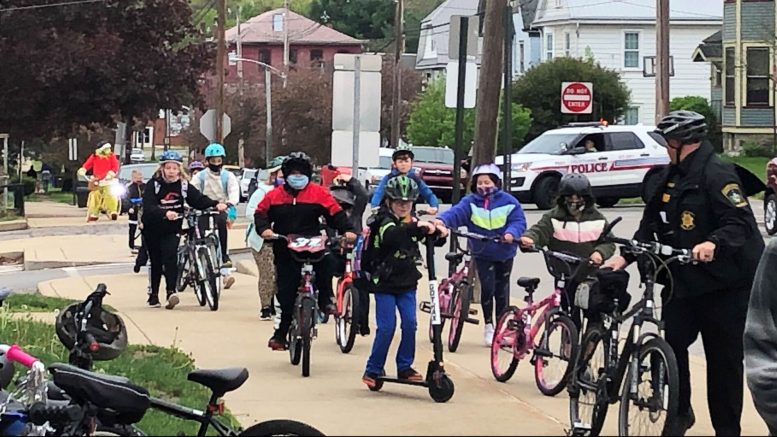 Student bicyclists make their way to school Wednesday as part of the annual Bike to School Day. The Franklin observance is held each year in memory of Jim Holden, who was passionate about creating a trail system that connected cyclists to the region. (Submitted photo)

Students and staff members at Central Elementary School in Franklin observed National Bike to School Day despite some cloudy skies and the threat of raindrops Wednesday morning.

Nearly 70 bicyclists and 100 walkers participated in the event that is held in Franklin each year as a tribute to the late Jim Holden, a biking and outdoors enthusiast who was instrumental in getting the Franklin observance started in the early 2000s.

Three groups of students, parents, school and YMCA staff members, and city officials met at specific sites in town – at the corner of 13th and Railroad streets, in the parking lot of the Save A Lot store along Atlantic Avenue, and at the corner of Third and Liberty streets – and made their way toward the school together.

Each group was led by a bike-riding Venango County sheriff’s deputy, and members of the Franklin police department helped with traffic control while the groups made their way to the school.

A surprise visit by The Grinch was celebrated by the student bikers and walkers.