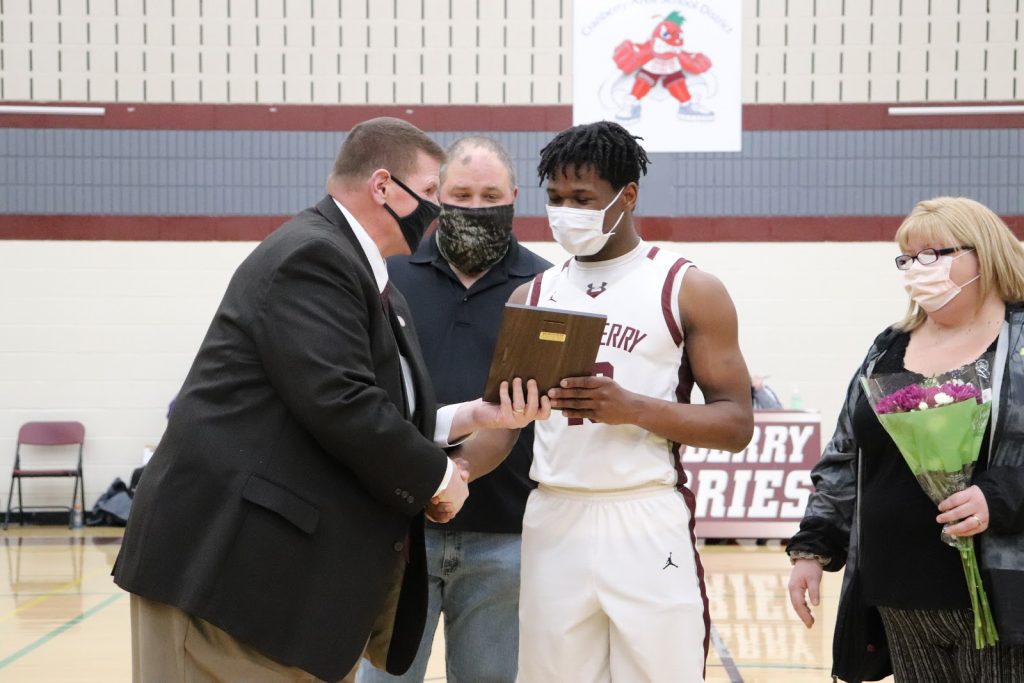 Coming from a small town, it can be difficult to achieve any form of recognition on a national level. However, Cranberry High School senior Cameron Russell’s standout performances as a football player on Oil City and Cranberry’s co-op team led to the bestowal of the Jim Kelly Player of the Week award.

In September, Russell was informed that he had been chosen to receive the Player of the Week award, named after Jim Kelly, a former NFL quarterback for the Buffalo Bills and inductee of the Pro Football Hall of Fame, who recognizes football players for their outstanding plays on the field.

Due to the interruption of Covid-19, Russell was officially honored with the award during Cranberry’s senior night on Feb. 5.

Upon receiving the recognition for this award, Russell felt honored and assured in both his talent and hard work.

“I appreciated that I got noticed by someone that was unbiased. Anyone could be chosen for this award regardless of where they’re from, and they chose me,” Russell said.

Looking toward the near future, Russell plans to continue improving his football skills in preparation for college. He hopes that his determination, effort, and passion for the sport will earn him a football scholarship for a Division I college and potentially even a starting position on the collegiate level.

By achieving this noteworthy award, Russell believes that his accomplishment could encourage others to pursue their own sports just as he did.

Russell said, “We are a small school, and for a player from here to get this award shows that anyone anywhere could succeed despite the school’s size. Your hard work will pay off.”

Hard work does pay off, and regardless of whether or not Russell and aspiring underclassmen come from a small town in rural Pennsylvania, everyone has the opportunity to be a stand-out player.

Hannah Niederriter and Ava Fischer are students at Cranberry High School and members of Cranberry Chronicles, the school’s journalism/publications class.