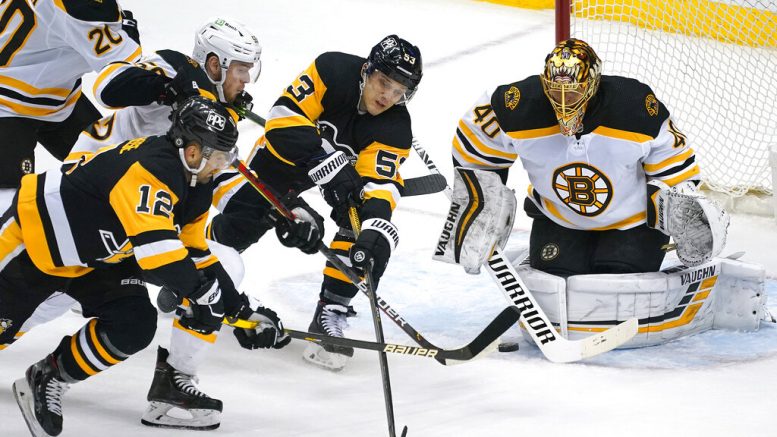 Pittsburgh Penguins' Zach Aston-Reese (12) gets off a shot in front of Boston Bruins goaltender Tuukka Rask (40) with Jeremy Lauzon (55) defending during the first period of an NHL hockey game in Pittsburgh, Tuesday, April 27, 2021. (AP)

Tuukka Rask turned aside 25 shots and the Boston Bruins edged the Pittsburgh Penguins 3-1 on Tuesday night to tighten the playoff race in the hyper-competitive East Division.

Boston’s victory means the top four teams in the East — the Bruins, the Penguins, Washington, and the New York Islanders — are separated by six points with just over two weeks to go in the regular season.

“We addressed some things before the game,” Boston forward David Krejci said. “We know where we’re at in the standings. We talked about some stuff. I thought, for the most part, we stuck to the game plan.”

Rask’s stellar play and goals by Krejci, Brad Marchand, and Taylor Hall helped the Bruins bounce back from a shutout loss to Pittsburgh on Sunday and offer a glimpse of what lies ahead. Boston blocked 21 shots, kept the crease in front of Rask largely clutter free and turned aside three Penguin power plays early, then basically shut down the Penguins late.

“I think the past couple games have been playoff-type hockey,” Rask said. “Both teams are defending the ice out there. … I think today, we played a very smart and patient game. We got rewarded. Moving forward, we have to be comfortable playing those types of games.”

Jeff Carter spoiled Rask’s bid for his 52nd career shutout with his 11th of the season — and third since joining the Penguins at the trade deadline — with 2:21 left, but it wasn’t enough. Tristan Jarry made 28 saves for Pittsburgh as the Penguins saw their four-game winning streak come to a halt.

“The whole night it seemed like we were a step behind in terms of winning puck battles,” Penguins forward Teddy Blueger said. “Didn’t get enough pucks on net, didn’t have enough traffic in front of Rask.”

The Penguins could have clinched a 15th straight playoff berth with a win and a loss by the Rangers to Buffalo. Neither happened, meaning any potential celebration will have to wait after Boston kept the NHL’s most potent attack in check to earn its fifth win in eight meetings with Pittsburgh.

The Penguins came into the game averaging 4.00 goals in April. They left it having been pushed around by the Bruins. Boston didn’t hesitate to initiate contact all over the ice and Pittsburgh found little room to work down low.

Krejci finally broke a scoreless tie with 1:50 left in the second period when he took a feed from Charlie McAvoy, sliced through the Pittsburgh zone, and ripped a pretty backhand by Jarry to give the Bruins the lead.

Marchand, long an issue for the Penguins, doubled the advantage with his 26th goal 9:11 into the third period. Hall, whose arrival at the trade deadline sparked a turnaround that thrust the Bruins out of a midseason funk, collected his fifth of the season and fourth with the Boston just over three minutes later to seal it.

Penguins Hall of Fame broadcaster Mike Lange returned the booth for the first time this season. The 73-year-old Lange, known for his eccentric calls like “scratch my back with a hacksaw” and “buy Sam a drink and give his dog one, too,” filled in after Josh Getzoff and his wife welcomed a son, Gunnar, on Monday.

The game marked the start of Lange’s 46th season with the team. The appearance is a cameo, at least for now. Getzoff is expected to return to the play-by-play role on Thursday. Getzoff took over this season when Lange announced in January he was taking a hiatus during the COVID-19 pandemic.

Lange delivered one of his signature lines on Carter’s goal.

“Get that dog off my lawn,” said Lange, who was given a loud ovation when he was featured on the scoreboard at PPG Paints Arena during a timeout.

Bruins: Begin a two-game set with Buffalo when the Sabres visit Boston on Thursday. The Bruins have won five of six meetings with Buffalo this season.