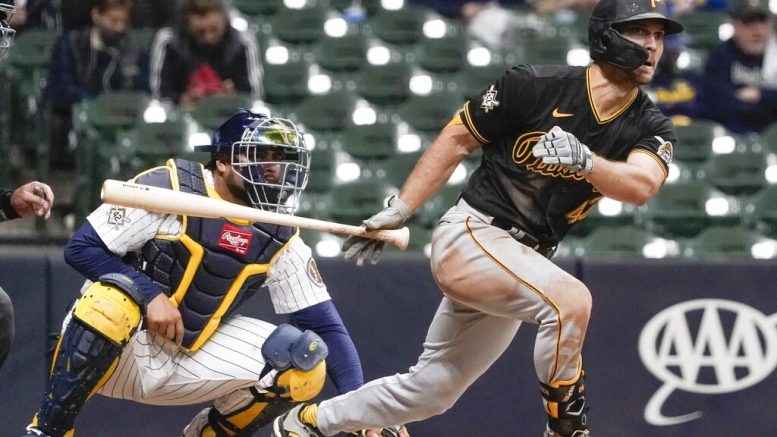 Pittsburgh Pirates' Adam Frazier hits a two-run scoring triple during the fifth inning of a baseball game against the Milwaukee Brewers Friday, April 16, 2021, in Milwaukee. (AP)

Colin Moran and Gregory Polanco homered for the Pirates, who have followed a six-game skid by winning five of seven. Adam Frazier added a two-run triple.

Brubaker (2-0) yielded one run and four hits, lowering his ERA to 1.76 in three starts this season. The right-hander didn’t walk anybody, though he did hit three batters.

Adrian Houser (1-2) allowed three runs in 4 1/3 innings, ending Milwaukee’s franchise-record streak of eight straight games in which its starting pitchers worked at least five innings while allowing no more than one run. Brewers starters posted an 0.59 ERA during that stretch.

“I wasn’t working ahead tonight,” Houser said. “That’s on me. That’s something I need to get back on the mound and fix in my next bullpen. It definitely changes the game. If I don’t start ahead, we can’t work the pitches we want. It definitely puts you in a bind when you get behind 2-0 a lot.”

Moran put the Pirates ahead for good in the second by sending a 2-1 pitch from Houser over the left-field wall for his third homer.

Pittsburgh had runners on first and second in the fifth when Houser was pulled. Frazier greeted reliever Brent Suter with a triple down the right-field line that brought home Kevin Newman and Dustin Fowler.

Frazier scored on Bryan Reynolds’ two-out double to make it 4-0.

Milwaukee’s only run came in the bottom of the fifth when Jace Peterson hit a one-out single and scored on Tyrone Taylor’s double.

The Brewers had multiple chances to cut into the lead with RBI leader Travis Shaw at the plate in two-out situations, but he was unable to deliver.

Shaw struck out swinging at a 3-2 pitch with the bases loaded in the third. Milwaukee had two on in the fifth when his line drive went right into the Pirates’ infield shift, enabling Newman to snare it. Shaw came up with the bases full again in the seventh but flied out on reliever Sam Howard’s first pitch.

“I had three opportunities,” Shaw said. “Just for some reason tonight, I wasn’t able to cash in on any of those. A couple of big spots there with the bases loaded. Overall a couple of decent swings, just nothing to show for it.”

Four Pirates relievers combined to allow just one hit in three shutout innings, though they issued four walks. Pittsburgh’s bullpen has permitted only one run over its last 17 2/3 innings.

“I think it’s attacking the zone,” Pirates manager Derek Shelton said. “We have to come out and attack the zone and make other teams beat us. That’s the key.”

Polanco broke the game open in the eighth with a two-run homer off Devin Williams, who has allowed four earned runs in 3 2/3 innings this season. Williams gave up just one earned run over 27 innings last season to earn NL Rookie of the Year honors.

Pirates: RHP Michael Feliz (0-0, 3.18 ERA) went on the 10-day injured list with a cracked nail on his right middle finger. RHP Sean Poppen was added to the active roster.

Brewers: OF Christian Yelich missed his fourth straight game with a sore back.