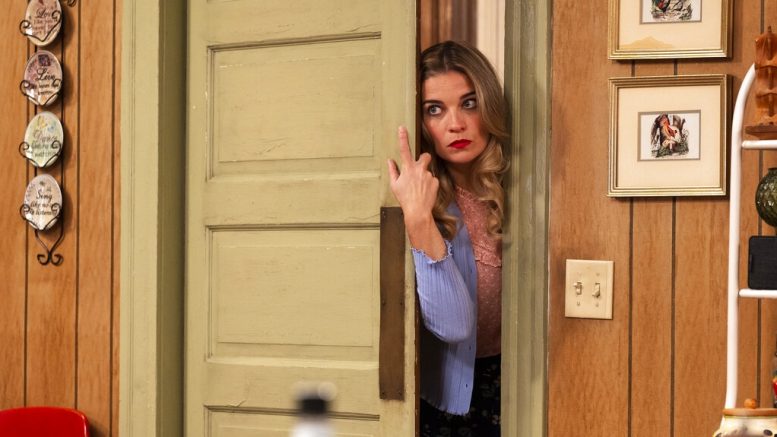 This image released by AMC shows Annie Murphy in a scene from the comedy series "Kevin Can F*** Himself." (AP)

NEW YORK (AP) — “Schitt’s Creek” star Annie Murphy’s new AMC series “Kevin Can F Himself” presents itself as one of those traditional multicamera comedies with a laugh track and corny jokes. Viewers will quickly learn it’s actually much darker.

Murphy stars as Allison, an overwhelmed wife who does all the work at home and puts up with her husband’s immature antics. When she’s alone, the show changes to a single camera formula, the lighting goes dark, and Allison isn’t just exhausted, but furious. She’s deeply unfulfilled in her life and marriage and desperate for a way out.

Murphy, who already won the acting gig lottery with “Schitt’s Creek” and earned herself an Emmy Award, says she would have never said yes to “Kevin” if it were a straight sitcom.

Those bright, multicam scenes serve a purpose. They illustrate how so many of the sitcoms we’ve all loved over the years about a haggard wife with a lazy husband have not only said something about our culture but a lack of opportunities in showbiz for women.

Murphy sees many of those shows now as missed opportunities. “They do not give a thought to the women involved, so many of whom are spectacular comedic actresses,” says Murphy. “And they give them very, very, very little to work with.”

The 34-year-old wasn’t always this enlightened and it’s something she’s “deeply ashamed” about.

“I’d watch a sitcom no problem with the rest of them, and that’s just the way it was,” says Murphy. “I didn’t really overthink it, and now I can do nothing but overthink it. There is no going back to watching a sitcom the way that I used to because now I have a completely different lens on when I watch. Just to see the amount of misogyny and homophobia and racism that we are being kind of coached to laugh at in these sitcoms is really jaw-dropping. You can’t unsee it.”

Eric Petersen, who plays Kevin, is more measured, saying he’s worked in multicam formats before and is appreciative of those opportunities. Before accepting the role, he wanted to clarify the show wasn’t simply a campaign against the multicam comedy.

“I was like, ’I just want to make sure we’re not making a show that’s like, ‘We hate multicam.” It was more taking the multicam, putting it on its head, shaking it a little bit, and then putting it back to say something about the world, about the industry, and about current events.”

The show title is a play on the Kevin James sitcom “Kevin Can Wait” which aired on CBS from 2016-18. After a lackluster first season, Erin Hayes, who played James’ wife, was killed off the show and replaced by Leah Remini as a potential love interest. Remini and James co-starred on “The King of Queens” for nine seasons.

Creator Valerie Armstrong says she hasn’t heard any feedback regarding the title but she’s not waiting by the phone either.

“The title stopped being some reference to anything else so long ago,” she says. There were reminders on set of its origin, however. Some of the ‘Kevin Can F Himself’ crew also worked on ‘Kevin Can Wait.'”

“They would wear their ‘Kevin Can Wait’ merch, like their show jackets while they were filming, which always made me laugh,” said Petersen.