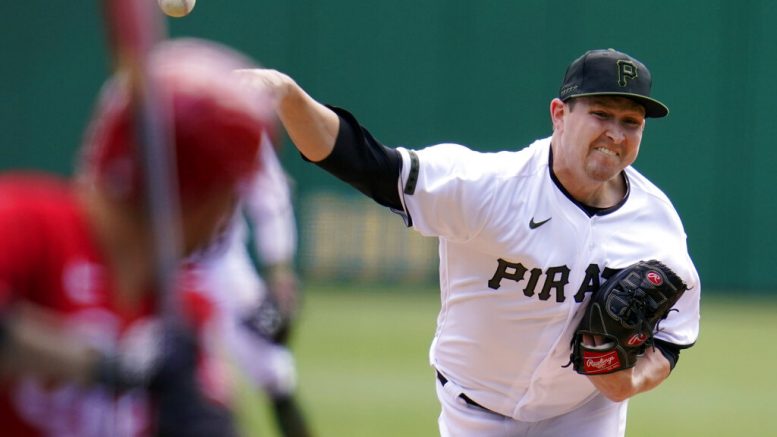 Pittsburgh Pirates starting pitcher Trevor Cahill delivers during the first inning of a baseball game against the Cincinnati Reds in Pittsburgh, Wednesday, May 12, 2021. (AP)

PITTSBURGH (AP) — Jesse Winker and Eugenio Suárez combined to drive in four runs in the 10th inning as Cincinnati’s bullpen threw 5 1/3 hitless innings, and the Reds beat the Pittsburgh Pirates 5-1 on Wednesday.

Winker singled off reliever Duane Underwood Jr. (1-2) to lead off the 10th, scoring designated runner Nick Senzel. Nick Castellanos singled and Mike Moustakas walked ahead of Suárez, who drove a pitch into the left-center gap for a three-run double.

Lucas Sims (2-1) worked two perfect innings with four strikeouts to earn the win. The Cincinnati bullpen struck out nine without allowing a hit in relief of Sonny Gray.

“That was the key,” manager David Bell said. “It gave us the opportunity to be able to win it. Tenth inning, our offense came through, but we wouldn’t have been in that situation without our pitching.”

Gray ended a 48-game streak of allowing six hits or fewer, as the Pirates earned seven knocks against him in 4 2/3 innings. Gray also threw four wild pitches, helping Pittsburgh advance runners into scoring position in each of the first five innings, but five strikeouts helped him strand six Pirates.

“I felt good,” Gray said. “It was just kind of one of those days. … There was constant motion on the bases. You’re just trying to make a pitch.”

“We have to find a way to get runs across,” Pirates manager Derek Shelton said. “We had opportunities, especially against Sonny Gray, to put people on base, which people have not done in the last couple of years. We gave ourselves opportunities, then didn’t capitalize on them.”

Trevor Cahill started for Pittsburgh and threw 5 1/3 innings of three-hit ball while allowing just one run. He walked one and struck out one.

Moustakas led off the second with a home run to left-center field, his fourth of the season. The RBI was the 600th of his 11-year career.

The Reds have won five straight extra-inning games and are 6-2 in extra innings this season. No other team has more than four such victories.

“It’s all about guys coming through in big spots,” Bell said. “The key in most cases is not being satisfied with scoring the one run. … We’ve been able to add on in those spots. Several good at-bats in that inning.”

Pirates: INF/OF Phillip Evans left the game with left hamstring discomfort after advancing to second base in the fifth inning. … RHP Chad Kuhl (right shoulder discomfort) will throw a simulated game this week. He hasn’t pitched since April 18.

Reds: RHP Luis Castillo (1-4, 6.42 ERA) will start a four-game series at Colorado on Thursday. Castillo had been scheduled to start Friday but had his day flipped to give Wade Miley an extra day of rest after throwing 114 pitches in his no-hitter against Cleveland on May 7.

Pirates: RHP Wil Crowe (0-1, 4.02) will face San Francisco at home Thursday. Crowe had five strikeouts over six innings in his last start, career bests in both categories for the rookie.