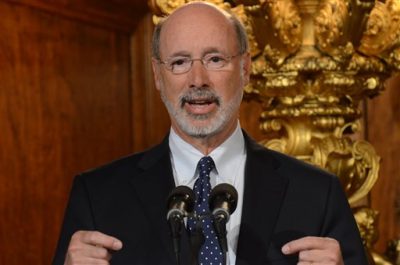 HARRISBURG (AP) — State health officials have announced six additional presumptive positive cases of the coronavirus, bringing the statewide total to 47 cases, and the governor urged nonessential businesses in two more Philadelphia-area counties to shut down amid the outbreak.

The Pennsylvania Department of Health said Saturday that there were two cases in Allegheny County — the first reported there — as well as two new cases in adults from Montgomery County, one in an adult from Philadelphia and one in an adult from Chester County. All are either in isolation at home or are being treated at a hospital.

Gov. Tom Wolf also extended to Chester and Bucks counties a call for non-essential businesses to to close, echoing a voluntary call made earlier to Montgomery and Delaware counties. He said essential infrastructure such as pharmacies, grocery stores and gas stores will remain open, and officials said travel is not being restricted.

“If we can slow the spread of this virus … we can keep an enormous number of Pennsylvanians from needing the kind of emergency treatment at the same time that’s going to overwhelm our health care system,” Wolf said. “Stay calm, stay home and stay safe.”

The Wolf administration said it “strongly encourages businesses to act now before the governor or the secretary of health finds it necessary to compel closures under the law for the interest of public health.”

In Philadelphia, however, city officials said people should feel free to continue to go to retail businesses and public parks while warning that this advice could change. Mayor Jim Kenney urged people to wash their hands and stay three feet from other people, but added “go out and have dinner and tip your wait staff, because they’re struggling right now.”

“We have to figure out a way that we can continue moving forward without panicking to the point where everything shuts down,” Kenney said Saturday. “We may be healthier but the economy will be in the tank, and we can’t have that.” He later said on Twitter that he was “attempting to show support for local businesses and stop panic. … We should all be mindful to limit gatherings, and of course, if you don’t feel well, stay home.”

Wolf said a special election scheduled Tuesday in Bucks County will be postponed, but there is no agreement yet on a new date.

Museums and casinos in the commonwealth joined the growing number of organizations announcing temporary closures due to the outbreak. Officials said Free Library locations in Philadelphia would be closed to the public, heeding a recommendation from the state, but staff members were told to report to work.

In Pittsburgh, Public Safety Director Wendell Hissrich said “social distancing” would be a challenge in bars and restaurants, but businesses are being urged to lower occupancy rates “to give people more space.” He warned that city police, firefighters and and inspectors would be “on the ground strictly enforcing occupancy maximums.”

The Pennsylvania Liquor Control Board announced a “phased closure” of wine and spirit stores in Bucks, Chester, Delaware and Montgomery counties to help slow the spread of the virus.

PECO announced that it was suspending utility service disconnections and waiving new late payment charges through at least May 1.

A look at the latest developments in Pennsylvania:

InN hard-hit Montgomery County, court officials announced that all jury trials, civil and criminal, would be canceled through March 27 amid the coronavirus outbreak.

State and local museums announcing shutdowns amid a wave of closures aimed at slowing the spread of the new coronavirus.

The Pennsylvania Historical and Museum Commission says all state-owned historic sites and museums — regardless of location — will be closed as of Sunday through the end of the month. The commission earlier this week closed the State Museum of Pennsylvania and the state archives in Harrisburg as well as sites in Montgomery and Delaware counties. Commission meetings are being limited to 10 people or fewer through the end of April.

In Philadelphia, officials announced that museums on the Ben Franklin Parkway — including the Philadelphia Museum of Art, the Franklin Institute, the Barnes Foundation and the Academy of Natural Sciences of Drexel University will close and postpone or cancel events for at least two weeks.

The August Wilson African American Cultural Center in Pittsburgh announced a closure until March 31. The center said exhibitions would be extended through April 12.

Five of the 12 casinos in Pennsylvania have announced closures amid the outbreak.

Rivers Casino Philadelphia said it would close at midnight Sunday for 14 days “out of an abundance of caution and to promote the social distancing recommended by health officials” although there had been no known cases of coronavirus at the property. The company said it planned to keep employees on the payroll during that period. Rivers Casino Pittsburgh also said it would close for 14 days as of midnight Sunday.

The Valley Forge Casino in King Of Prussia earlier said it was closing in compliance the the governor’s directive to close public schools, entertainment venues and community centers in hard-hit Montgomery County. The casino said it would reopen March 27 and also noted that there had been no reported cases of the virus at the property.

Harrah’s Philadelphia said it was closing as of Saturday “for the well-being of our team members and guests.” Parx Casino said it would close as of 6 a.m. Sunday “as responsible business leaders within the Bensalem community and as one of the largest employers in Bucks County.”

Allegheny County officials said the two Pittsburgh residents — who reside in the same household, one with an age in the 70s and the other in the 60s — are believed to have contracted the virus while traveling out of state. Both are currently in isolation at home.

The confirmed cases largely have been traced back to contact with the new coronavirus in another state or country. Most people are at home in isolation, officials say; a few are hospitalized.

For most people, the new coronavirus causes only mild or moderate symptoms, such as fever and cough. For some, especially older adults and people with existing health problems, it can cause more severe illness, including pneumonia, and death.

The vast majority of people recover.