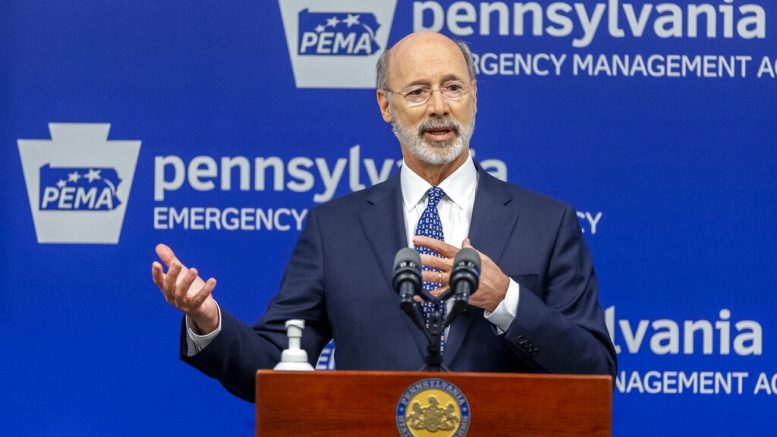 HARRISBURG (AP) — Coronavirus-related crowd restrictions for both indoor and outdoor events were loosened Tuesday by Pennsylvania Gov. Tom Wolf, who called the shift “a gradual adjustment to our lives as we learn how we can do things safely” until there’s a vaccine for the virus or cure for the disease.

The Democratic governor’s new limits employ a sliding scale, linked to the size of the crowd, to determine capacity. The rules, which go into effect on Friday, will replace limits of 25 people indoors and 250 outdoors, allowing much larger crowds at a range of events, including school sports.

The guidelines also apply to college and professional sports, prompting the Pittsburgh Steelers to announce fans will be in the stands for Sunday’s game against the Philadelphia Eagles, with the limited tickets going to season ticket holders selected at random.

The state health secretary, Dr. Rachel Levine, cautioned that the changes may not be permanent.

“If our case investigation and contact tracing efforts determine that events or gatherings are the source of an outbreak, we can and will dial back these new limits,” Levine said in a release.

Wolf and Levine said the changes apply to temporary groups of people meeting over a limited time period, including fairs, festivals, concerts and shows, as well as larger and more permanent events such as performances at amusement parks, movies, business meetings and conferences.

State House Republicans, who have opposed many of Wolf’s pandemic response policies, called the new crowd limits welcome but drafted without giving sufficient consideration to where the virus is having the largest effect or the state’s geographical variety.

Capacity is determined by a venue’s established occupancy limit as defined by the National Fire Protection Association’s life safety code.

Wolf’s limits of 25 indoors and 250 outdoors were thrown out by a western Pennsylvania federal judge, but on Oct. 1 the 3rd U.S. Circuit Court of Appeals reinstated the governor’s limits while that decision is appealed.

The Wolf administration’s guidance says it does not apply to groups that share a space within an office building, classrooms, production floors or other “regularly occurring operation of a business or organization.”