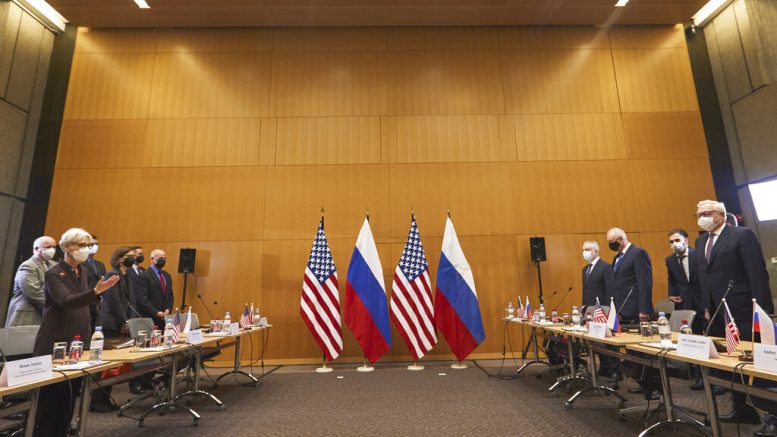 GENEVA (AP) — Senior U.S. and Russian officials launched special talks Monday on strategic stability, part of a flurry of diplomatic activity in Europe this week aimed at defusing tensions over a Russian military buildup on the border with Ukraine, though no major breakthrough was immediately in sight.

Russian Deputy Foreign Minister Sergei Ryabkov and his delegation arrived under Swiss police escort at the U.S. diplomatic mission in Geneva for face-to-face talks with Wendy Sherman, the U.S. deputy secretary of state, and her team. The meeting is part of “Strategic Security Dialogue” talks on arms control and other broad issues launched by Presidents Joe Biden and Vladimir Putin during a June summit in the Swiss city.

After an informal working dinner on Sunday, Ryabkov predicted “difficult” talks in Geneva that are to be followed by a NATO-Russia meeting in Brussels on Wednesday and a meeting Thursday in Vienna of the multilateral Organization for Security and Cooperation in Europe.

Moscow has sought to wrest a string of concessions from the U.S. and its Western allies, including guarantees that NATO will no longer expand eastward into former Soviet states like Ukraine, along whose border Russia has amassed an estimated 100,000 troops in steps that have raised concerns about a possible military intervention there.

State Department spokesman Ned Price said during Sunday’s dinner Sherman “stressed the United States’ commitment to the international principles of sovereignty, territorial integrity and the freedom of sovereign nations to choose their own alliances,” a reference to Ukraine and its aspirations of joining NATO. Many analysts say any such accession would be years away at best.

The U.S. has played down hopes of significant progress this week and said some demands — like a possible halt to NATO expansion — go against countries’ sovereign rights to set up their own security arrangements, and are thus non-negotiable.

But U.S. officials have expressed openness to other ideas, like curtailing possible future deployments of offensive missiles in Ukraine and putting limits on American and NATO military exercises in Eastern Europe — if Russia is willing to back off on Ukraine.

U.S. Secretary of State Antony Blinken said bluntly Sunday that he doesn’t expect any breakthroughs in the coming week. Instead, he said a more likely positive outcome would be an agreement to de-escalate tensions in the short term and return to talks at an appropriate time in the future. But the U.S. will have to see a de-escalation for there to be actual progress.

“It’s very hard to see that happening when there’s an ongoing escalation, when Russia has a gun to the head of Ukraine with 100,000 troops near its borders, the possibility of doubling that on very short order,” Blinken said on ABC’s “This Week.”

`Speaking to reporters during a visit to Rome, German Foreign Minister Annalena Baerbock said dialogue offered the only way out of the crisis.

“At the same time, it’s equally clear that a renewed breach of Ukrainian sovereignty by Russia would have grave consequences,” she said.

Russia has said it wants the issue resolved this month, but NATO is wary that Putin might be looking for a pretext, such as a negotiating failure, to launch an invasion.

The United States, which has emphasized that Ukraine’s government and those of other European countries need to be included in the discussions, plans to discuss some bilateral issues in Geneva “but will not discuss European security without our European allies and partners,” Price said Sunday.

Russia was coming into the talks seeking a clearer understanding of the U.S. position, and cited signals from Washington that some of the Russian proposals can be discussed, Ryabkov said, according to state news agency Tass on Sunday.

He laid out Russia’s three demands: no further NATO expansion, no missiles on Russia’s borders, and for NATO no longer to have military exercises, intelligence operations, or infrastructure outside of its 1997 borders.

“The Russian side came here with a clear position that contains a number of elements that, to my mind, are understandable and have been so clearly formulated — including at a high level — that deviating from our approaches simply is not possible,” Ryabkov told reporters Sunday.

Asked whether Russia was ready for compromise, he said: “The Americans should get ready to reach a compromise.”