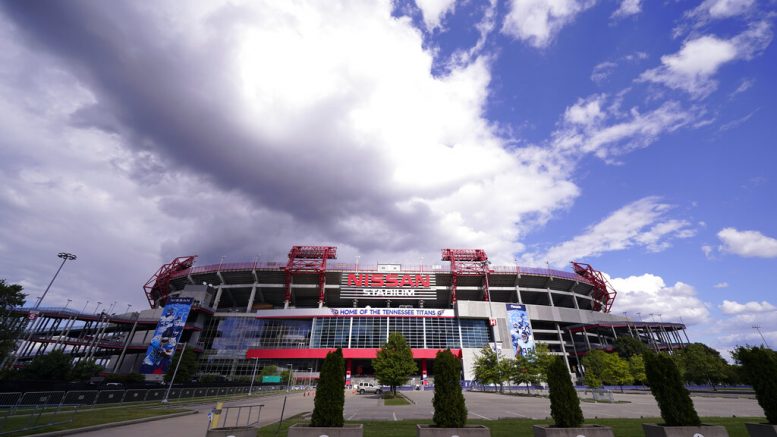 Nissan Stadium, home of the Tennessee Titans, is shown Tuesday, Sept. 29, 2020, in Nashville, Tenn. The Titans suspended in-person activities through Friday after the NFL says three Titans players and five personnel tested positive for the coronavirus, becoming the first COVID-19 outbreak of the NFL season in Week 4. (AP)

NASHVILLE, Tenn. (AP) — The Tennessee Titans won’t be back inside their building until Saturday at the earliest because of eight positive tests for the coronavirus, the first outbreak to hit the NFL as it tries to play a full schedule amid the pandemic.

Tennessee is scheduled to host Pittsburgh in a matchup of two of the league’s seven remaining undefeated teams on Sunday, and Steelers coach Mike Tomlin said his team has been “given a mandate” to prepare as if the game will be played on time — even if the Titans are unable to practice.

“We’re going to trust the medical experts,” Tomlin said. “If they deem it safe for us to proceed, we’re going to go down there with the intention of playing and playing to win.”

Tennessee suspended in-person activities through Friday after the NFL said three Titans players and five personnel tested positive for the coronavirus. The NFL had played three weeks without a COVID-19 outbreak. Now, the Titans will become the first significant in-season test of the league’s virus protocols.

“Both clubs are working closely with the NFL and the (players union), including our infectious disease experts, to evaluate close contacts, perform additional testing and monitor developments,” the league said in a statement.

The Vikings released a statement saying they had not received any positive results from their testing after Sunday’s game and they followed NFL protocol by closing their facility immediately. The Minnesota complex will remain closed at least through Wednesday.

Minnesota is scheduled to visit Houston (0-3) on Sunday.

“All decisions will be made with health and safety as our primary consideration,” the NFL said. “We will continue to share updates as more information becomes available.”

If they kick off Sunday, the Titans will have spent three days in virtual, video meetings with possibly only a walk-through Saturday. The prospect of a team facing a competitive disadvantage because of the virus was not a surprise to Tomlin.

“Once we left the station and we got all teams into a training camp-like setting, we as a collective, meaning the National Football League, acknowledged that this COVID environment could be challenging to that,” Tomlin said. “So we all proceeded with that understanding.”

Commissioner Roger Goodell sent a memo to teams Tuesday noting the protocols set up by the league and the players union are being followed. Those who tested positive will be isolated, monitored and offered medical care, and family members also are offered testing. Officials and others who worked the game will be tested.

“This is not unexpected; as Dr. Sills and others have emphasized, there will be players and staff who will test positive during the season,” Goodell wrote in the memo obtained by The Associated Press, referencing the NFL’s chief medical officer, Dr. Allen Sills. “We are exploring in more detail the nature of the close contacts to determine where they occurred (locker room, flights, etc.), and identify any additional learnings that can be shared with all clubs.”

Goodell asked teams to look at what they’ve done to limit contact, especially when traveling and within position groups, and to review how they bring in players for tryouts. He noted the test results affirm the need to follow health and safety protocols “to the fullest extent.”

The NFL has been fining coaches and teams when coaches have violated league rules requiring face coverings during games.

Steelers defensive tackle Cam Heyward posted on Twitter that if the game were postponed, players would be compromised in their preparation for the following week.

“This is wild but this is the world we live in now,” Heyward wrote.

Titans outside linebackers coach Shane Bowen did not travel with the team to Minneapolis following a virus test result Saturday. Vrabel said Monday that Bowen was not with the team.

Rookie offensive lineman Isaiah Wilson, the Titans’ top draft pick out of Georgia, also has been on the reserve/COVID-19 list since Sept. 6.

The Titans, like other NFL teams, use devices that detect whenever someone is within 6 feet of another device and records how long they are that close together. That means the league has data on everyone’s interactions from inside the team headquarters to the practice field, an airplane, inside a hotel and at a stadium.

That information should help the Titans and the infectious disease experts know which players and coaches were at risk. The closure of Tennessee’s facility should also help limit further spread of the virus.

The Titans are due to have about 7,000 fans in Nissan Stadium on Sunday as local restrictions on large gatherings have been eased. That number is set to expand to about 8,500 on Oct. 11 for a game against Buffalo and up to 10,000 on Oct. 18, when Houston is scheduled to visit.