A bald Eagle nicknamed “Promise” was released Tuesday after recovering from lead poisoning through treatment at Tamarack Wildlife Center. 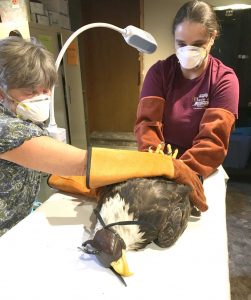 Tamarack Wildlife Center volunteers work on a bald eagle that had been suffering from lead poisoning. (Submitted photo)

The bird, approximately 5 years old, was found Aug. 22 and was not able to fly, according to a news release from Tamarack. A second adult bald eagle, most likely a family member, was found deceased nearby.

Game Warden Dan Carl captured the sick bird, which was unable to stand and brought it to Tamarack, where the bird tested positive for lead poisoning and received intensive chelation treatment, the release said.

Eagles most commonly suffer from lead poisoning after ingesting animals that have been dispatched with ammunition containing lead, the release said.

Promise was released on State Game Lands near Pymatuning, not far from the Jamestown location where she was initially found, the release said.