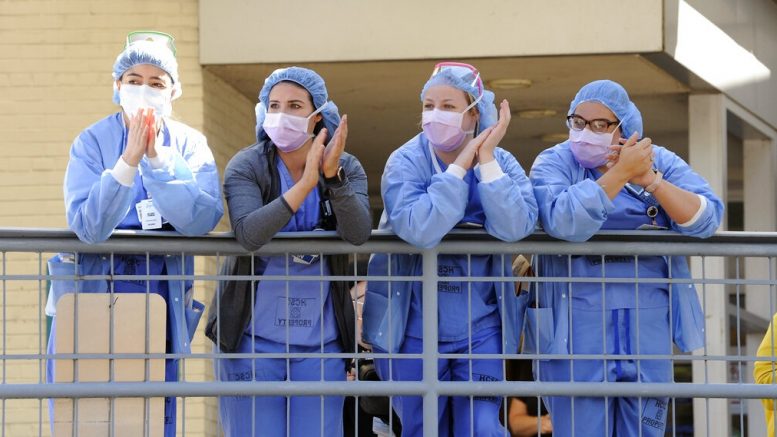 HARRISBURG (AP) — The coronavirus death toll grew Thursday by more than 300 as Gov. Tom Wolf ordered most Pennsylvania residents to stay at home until June 4, extending a statewide edict he first imposed April 1 to slow the spread of the new virus.

The revised stay-at-home order, issued late Thursday to replace one that was set to expire at midnight, applies to all counties that remain under Wolf’s strictest lockdown orders — meaning that for now, millions of people face the prospect of at least another month at home.

At the same time, the governor is planning to allow more counties with relatively few virus infections to emerge from some pandemic restrictions. He said he will reveal the names of those counties on Friday. They will join 24 counties in the lightly populated and mostly rural north where Wolf has already lifted his stay-at-home orders and allowed retailers and many other kinds of businesses to reopen beginning Friday morning.

Republicans have accused Wolf of moving too slowly to reopen Pennsylvania’s battered and largely shuttered economy.

Earlier Thursday, Wolf extended a moratorium on foreclosures and evictions by another two months, until July 10, saying residents shouldn’t have to worry about losing their homes during the pandemic.

Here are the latest coronavirus-related developments in Pennsylvania:

“No one should have to worry about losing their home during this health emergency,” Wolf said at a video news conference. “This executive order takes one more burden off people who are struggling and gives them more time to get back on their feet.”

A board member of one of the state’s largest landlord groups blasted the extended moratorium, saying it gives tenants the ability to live rent-free without consequence for months.

Robert Levin of HAPCO Philadelphia, which represents 2,000 property owners in the city, said operators will be hard-pressed to keep up with taxes, insurance, utilities, maintenance and mortgage payments without the ability to enforce lease agreements.

Wolf noted that renters and homeowners are still required to make monthly payments. But he called on landlords to work with tenants through the crisis.

Rachel Garland, managing attorney for the housing unit at Community Legal Services of Philadelphia, said some renters were worried and haven’t gotten unemployment benefits yet.

“Once you get an eviction filed against you, that is a mark on your record and that makes it difficult to get quality housing in the future,” she said.

Self-employed people, gig workers and others not normally eligible for unemployment compensation were supposed to be able to start filing backdated claims Thursday under a new federal benefits program being administered by the state.

But the rollout was rife with complaints, and some applicants reported glitches that prevented them from completing the process.

Sarah Downing, a self-employed massage therapist in Doylestown, told The Associated Press that she logged onto the system Thursday morning to file weekly claims for the first time, only to get an error message that said she was “not totally unemployed” — even though she’s not worked since March 17 because of the business shutdown. She was unable to file. Many other applicants reported the same issue.

“People are desperate at this point,” Downing said in a phone interview. “How are you supposed to survive indefinitely on lockdown without making any money?”

Ray Masters, a self-employed airbrush artist from Pittsburgh who has been without clients since March 6, said the system wouldn’t let him file for his week of unemployment. It accepted his second week’s filing, but then prevented him from filing for his third week of unemployment before he stopped amid conflicting messages on how to proceed, he said.

“I’m at a loss for what to do at this point, so I’m waiting until tomorrow at least to see if anything changes,” Masters said.

The Department of Labor and Industry offered no immediate explanation for the reported problems.

Since March 15, more than 174,000 people have applied to the Pandemic Unemployment Assistance program. The state began accepting applications April 18 but wasn’t able to pay benefits while it built out the system.

On Thursday, the Department of Labor and Industry had said it was fully operational.

A record 1.7 million Pennsylvanians have filed for regular unemployment compensation since mid-March amid economic devastation from the pandemic and efforts to contain it.

The Pennsylvania Department of Health said Thursday that 310 more people with COVID-19 have died, raising the statewide death toll to 3,416.

The deaths took place over the past several weeks. The Health Department has been reconciling its records with data provided by hospitals, health care systems, municipal health departments and long-term care centers.

Residents of nursing homes and personal care homes account for nearly 70% of the overall death toll.

Health officials reported 1,070 additional people have tested positive for the virus that causes COVID-19, the first time new infections have topped 1,000 since Saturday. To date, the virus has been confirmed in about 53,000 people in Pennsylvania.

The number of infections is thought to be far higher because many people have not been tested, and studies suggest people can be infected with the virus without feeling sick.

The family of a meat processing plant worker who died of COVID-19 has sued the company and several affiliates, saying his death was the result of negligence in responding to the epidemic.

The wrongful death lawsuit filed in Philadelphia on Thursday concerns Enock Benjamin, who was a union shop steward at the JBS beef processing plant in Souderton, the largest facility of its kind east of Chicago.

It says he died of respiratory failure related to COVID-19 on April 3.