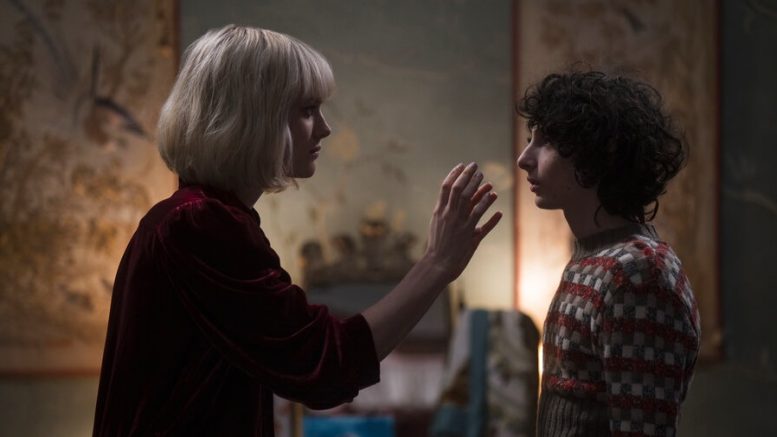 This image released by Universal Pictures shows Mackenzie Davis, left, and Finn Wolfhard in a scene from "The Turning." (AP)

It’s really not a good sign when a movie ends with a bold, shocking flourish and much of the audience can be heard muttering through the credits: “Wait, um … WHAT?”

Not, “Ooh” or “Wow” or “Hmm” or “Interesting!” Nope, this is more like an exasperated, even hostile sigh of confusion, as in, “I sat through an hour and a half for THIS?”

A befuddling ending is hardly the only perplexing choice by the filmmakers of “The Turning,” the latest update to the 19th-century horror novella “The Turn of the Screw” by Henry James, a man we could say is now “turning” in his grave — but we’ll spare you the pun.

One might also wonder, for example, why the action is transferred not to the present but only to 1994. A good guess might be the grunge-heavy soundtrack assembled here by director Floria Sigismondi, a veteran of music videos. It’s also the year of Kurt Cobain’s death — a poster of Cobain pointedly adorns the bedroom wall of one of the two orphans at the center of the plot.

But one suspects it might have something to do with technology, too, because if this movie took place in the WhatsApp era, our protagonist Kate, the governess sent to care for these troubled tykes in a secluded, dilapidated Maine mansion, would have texted friends for help pronto, and the story — hers, anyway — would quickly be over. Certainly by the time the sweet little kids staged a terrifying fake drowning in the swimming pool, just for kicks.

But we’re getting ahead of ourselves. A brief primer on the century-old plot: Kate is hired as a live-in tutor for Flora, age 7. The only other person in the home is the housekeeper, Mrs. Grose, a brittle, prickly woman who’s taken care of the family for generations. Older brother Miles is at boarding school.

Even before Kate (Mackenzie Davis, who brings a spunky, ready-for-anything vibe to the role but is ultimately defeated by the limited material) arrives for work, you sense she hasn’t really thought it all through. A schoolteacher, she’s leaving her 25 pupils to be a private tutor because, she tells her roommate, “I love teaching, but I want to make a difference.” Huh?

The Bly estate, as the home is called, might be a realtor’s dream — the ultimate fixer-upper — but things seem a little off from the start. Mrs. Grose asks Kate if she’s ever been a live-in governess. “Not since the 1800s,” Kate jokes wittily, not that Mrs. Grose (a frighteningly pale Barbara Marten, dressed all in gray) has a sense of humor. Kate learns that the children’s parents died in an accident, right outside the gates. And the previous nanny? She vanished without a trace.

As for Flora (a winning Brooklynn Prince from “The Florida Project”), she never leaves the property and has no friends. Kate promises the girl she won’t abandon her like the other nanny did.

But things go south fast. Miles (a mop-headed Finn Wolfhard) comes home and proves a difficult boy, to say the least. And then, if difficult children weren’t enough, there are the ghosts, who start popping up at inopportune times and scaring the living daylights out of Kate.

If you’re familiar with the novella or the 1961 film “The Innocents,” you’ll know that figures from the past haunt the house — or do they? The question has always been whether it could all be part of the nanny’s troubled imagination. Kate’s mother (Joely Richardson), we learn early in the film, is institutionalized with mental issues, and the film suggests Kate may be afflicted, too.

And when we say “suggests,” we mean a character actually says, “Let’s hope it’s not genetic.” Nothing is subtle here, least of all the scary bits, the bread and butter of any horror film. Thunder at night? Check. Slamming doors? Scary faces materializing in windows and foggy mirrors? A mannequin that suddenly moves? Check. A game of tag in a dark basement turning scary ….well, duh!

The filmmakers have spoken of injecting feminist themes into their adaptation, a “Turn of the Screw” for the #MeToo era. But it’s not easy to to discern what they are.

It proves harder still to discern the message in that abrupt ending. Yes, it’s commendable to find new ways to tell a classic tale. It’s just that this tale has been told better, and more clearly, many times before.

“The Turning, ” a Universal release, has been rated PG-13 by the Motion Picture Association of America “for terror, violence, disturbing images, brief strong language and some suggestive content.” Running time: 94 minutes. One and a half stars out of four.