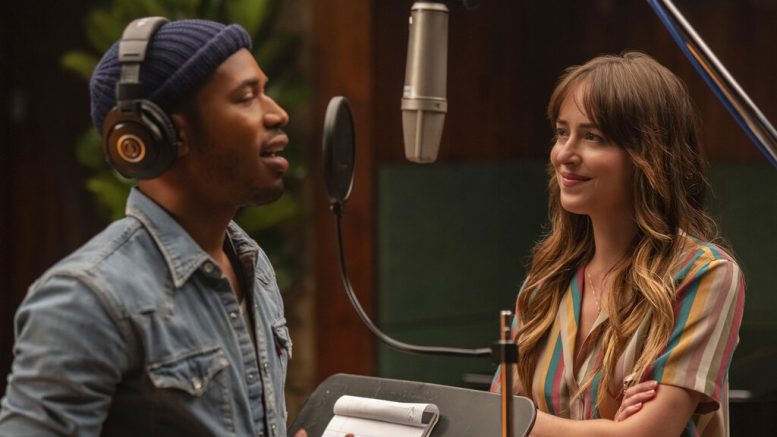 This image released by Focus Features shows Kelvin Harrison, Jr., left, and Dakota Johnson in a scene from "The High Note." (AP)

There may have been a point — say, oh, a few months ago? — when we’d have demanded a lot more edge from a movie like “The High Note,” and been less forgiving of its more implausible moments.

But hey, times have changed, and the pleasing chemistry of two very likable leads — Tracee Ellis Ross as a pop diva and Dakota Johnson as her harried, ambitious assistant — makes for some easy listening (and watching) in these troubled days.

Throw in charismatic supporting turns from Kelvin Harrison Jr. — the talented actor from “Waves,” who gets to sing here — and an amiably wisecracking Ice Cube, and we’ll forgive most foibles. Well, except a pretty ludicrous plot twist towards the end that surely would evince guffaws in the theater. IF we were still in theaters.

The main problem with “The High Note,” directed by Nisha Ganatra (“Late Night”) and written by Flora Greeson, is that after a very promising setup, it seems to lose its nerve halfway through. What could have been an interesting exploration of gender and age and race in the music industry, anchored by a truly appealing cast, turns into a rather familiar, Cinderella-style romcom. Albeit an enjoyable one.

Ross is indeed perfectly cast as pop star Grace Davis, and not just because she’s the actual daughter of a ginormous pop star, although you can’t help but think she has some of it in her DNA from mom Diana Ross (and a pretty good singing voice, too). Ross wears the mantle of superstardom well, able to march imperiously off a private jet and inform her assistant, Maggie, that she’s late, and by the way, yuck, why did you bring me this green drink (that I specifically asked for), anyway?

But there’s humanity underneath. Ross’ Grace is both tough and soft as a singer on the wrong side of 40, still touring with her greatest hits, but struggling to figure out how to remain on top.

Grace wants to record a new album — something she hasn’t done in a decade. But her longtime manager, Jack (Ice Cube), is tired of the road, and pushing the option of a cushy Las Vegas residency, the same show every night for five or even 10 years. Besides, he tells her, nobody cares about new music.

Meanwhile, Maggie, chafing at the bottom of the music industry food chain, wants to be a producer. And she’s talented. Well, we assume she is. There’s not a whole lot of detail on that point, but we’ll believe she’s talented because heck, Johnson is so charming. Clad mostly in ripped jeans, flannel shirts, white tees and messy-ish hair, she commands the screen with her breezy presence, a nice foil for the tightly wound Grace.

Maggie and her inevitable love interest, David, meet cute at the grocery store, flirting over their tastes in music. She thinks he’s cute but is shocked to hear he doesn’t know who Sam Cooke was. Then she hears him performing outside — Cooke’s “You Send Me,” natch!

The two have romantic chemistry (duh) but Maggie’s more interested in David as a client. She lies and says she’s a producer. They begin recording sessions, and Maggie comes up with a plan to get him heard. A plan that seems ingenious but sets all sorts of mistakes in motion. And that’s when the movie starts to feel like many others.

But, silver linings: Ross is never less than compelling, especially when she summons all her life experience and resulting cynicism to dress Maggie down late in the movie and remind her she’s an assistant, nothing more. Johnson is always easy to watch; Harrison is a dynamic presence, and as for Ice Cube, his low-key comedy is a delight, especially when he’s thinking about his weight and waxing dismissively about Pilates and salads.

So yes, you’ll likely guffaw at one key moment, but it probably won’t spoil the fun. And when you catch yourself saying, “That wouldn’t happen!“— well, let’s remind ourselves that this is precisely the time for a little escapism.

“The High Note,” a Focus Features release, has been rated PG-13 by the Motion Picture Association of America “for some strong language, and suggestive references.” Running time: 113 minutes. Two and a half stars out of four.

MPAA definition of PG-13: Parents strongly cautioned. Some material may be inappropriate for children under 13.