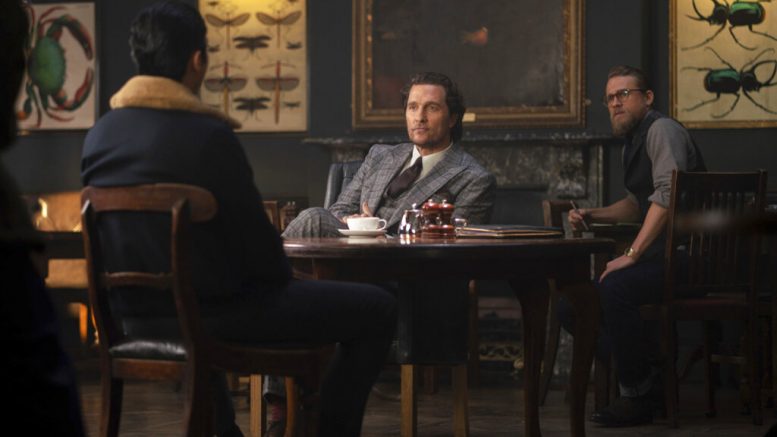 This image released by STXfilms shows, from left, Henry Golding, Matthew McConaughey and Charlie Hunnam in a scene from "The Gentlemen." (AP)

Guy Ritchie’s honor-among-thieves meta-caper “The Gentlemen,” with Matthew McConaughey, has all the tailored tweed suits and smoky atmosphere of a handsome scotch commercial. “The Gentlemen” might not be an ad, but Ritchie’s film is most assuredly selling something.

It’s selling a vision in which “real men” handle their business with a touch of class. There are those who get it (handsome, heterosexual white men) and those who don’t (over-ambitious minorities, predatory gay men). In “The Gentlemen,” any criminal aspirant lacking the proper panache is set straight, until the underworld empire of crime boss Mickey Pearson (McConaughey) has been sufficiently protected.

“If you wish to be the king of the jungle, it’s not enough to act like the king. You must be the king,” McConaughey’s gangster intones in the film’s opening. It’s a musing that would fit right into one of McConaughey’s Lincoln adverts but it reflects the overarching, chest-thumping ethos of “The Gentlemen,” a well-heeled, star-packed crime thriller that preaches a retrograde masculinity with the mumbo jumbo to go with it.

For Ritchie, “The Gentlemen” is a return to the scene of the crime. The British director first burst on the scene two decades ago with showily stylistic Cockney crime movies (“Lock, Stock and Two Smoking Barrels,” “Snatch”) before transitioning into larger and glossier studio projects. He made a pair of “Sherlock Holmes” pictures that glumly swapped the detective’s brains for brawn, and last year’s live-action “Aladdin.”

“The Gentlemen” brings Ritchie back into his element, for better and worse, along with an all-star cast including Charlie Hunnam, Hugh Grant, Colin Farrell, Jeremy Strong and Henry Golding. From the start, there’s plenty of winking. Mickey walks into a pub where a bartender draws a pint of the director’s own microbrew, Gritchie’s English Lore. The scene ends with mysterious bloodshed. After the credits, it shifts to a tale being told by a blackmailing tabloid journalist named Fletcher (Grant) to Mickey’s consiglieri, Raymond (Hunnam).

He relates his shakedown in elaborate fashion, framing the story he’s asking $20 million not to tell as a movie script titled “Bush.” (He thinks it should be in 35mm and be like Francis Ford Coppola’s “The Conversation” but less boring.) Raymond mostly listens patiently — he grills Fletcher a steak and abides his occasional leering — while Fletcher describes how Mickey attempted to sell his marijuana farm empire for $400 million but suddenly ran into countless headaches. His would-be buyer is a wealthy Jewish man played by Jeremy Strong of “Succession,” and the biggest tell that he’s somehow behind the trouble is his character’s fey manner, which in the world of “The Gentlemen” signals his duplicity. There is also an up-and-coming Chinese gangster Dry Eye (Golding), and you can guess that he turns out to be the bad sort of criminal unworthy of Mickey’s stature.

It’s not that Ritchie’s film doesn’t have some zip. The many-layered narrative, once it comes alive after lengthy exposition, is smartly plotted. And several of the actors are good, especially Farrell as a protective boxing trainer whose kids inadvertently get involved. And Hunnam’s presence, alone, keeps the movie grounded. But the movie time and time again exalts the gallantry of its gentlemen heroes at the expense of those unlike them. It gives this glass of Gritchie’s English Lore a bitter taste.

“The Gentlemen,” an STXfilms release, is rated R by the Motion Picture Association for violence, language throughout, sexual references and drug content. Running time: 115 minutes. Two stars out of four.