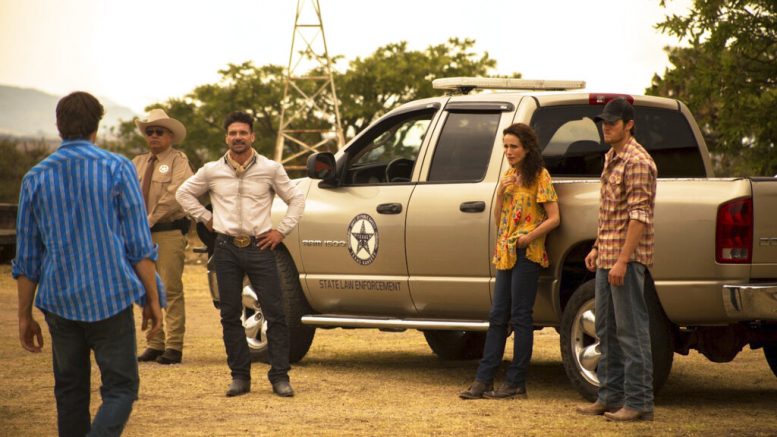 This image released by IFC Films shows, from second left, George Lopez, Frank Grillo, Andie McDowell and Jake Allyn in a scene from "No Man's Land." (IFC FIlms via AP)

Border tensions are boiled down to two families in “ No Man’s Land,” an uneven independent thriller with some redeeming qualities. Its heart, and homages to classic Westerns, are in the right place even if the work as a whole is neither as impactful nor epic as the filmmakers were striving for.

The film sets up two families on either side of the border. The Greers are American ranchers whose property exists in no man’s land, north of the Rio Grande but south of the fences. The Mexican family — they don’t get a last name — are just hoping to start a new life in America. But they have misfortune to cross through the Greers’ on a night that they’ve decided to patrol their lands. They’ve been frustrated that their cattle keep getting out when their fences are cut.

And about 30 minutes in, things come to a head in a tense showdown in the middle of the night. Bill Greer (Frank Grillo) and his son Lucas (Alex MacNicoll) have their guns drawn on the family, who are unarmed and panicked. The Greers speak no Spanish and don’t seem all that interested in the fact that Gustavo (Jorge A. Jimenez) speaks perfect English. The shouting continues and things go south quickly when the other son, Jackson (Jake Allyn), dashes into the situation to help and ends up shooting and killing Gustavo’s young son Fernando (Alessio Valentini) in the chaos. Lucas also gets shot.

It’s a fine set-up as Jackson is the son who is supposed to get out. He’s been recruited to play minor league baseball in New York. His father is prepared to take the blame, but Ramirez (George Lopez), the Texas Ranger who stumbles on the scene who also somehow does not speak Spanish, suspects the cover up. When he comes to arrest him, Jackson and his horse Sundance flee across the Rio Grande.

For a kid who has grown up on a small ranch, Jackson is shockingly inept at survival skills, drinking stagnant water, being a little too trusting of everyone he encounters and sleeping in random barns along the way. It’s also somewhat hard to believe that he has not in his 20 some years picked up even one word of Spanish, but perhaps the filmmakers are just trying to belabor the point of intolerance.

On his journey to nowhere, Jackson gets a lot of charity from strangers including a wealthy rancher with a stunning daughter (Esmeralda Pimentel) who let him stay and work for a while. And he starts to realize that his neighbors across the border are people too and not nuisances to shoo away with guns and hate. Oh and he’s also being hunted by Gustavo and a local tough Luis (Andres Delgado).

“No Man’s Land” was written by Allyn and directed by his brother Conor. The Texas-born siblings wanted to make a film about hope, even as “the world is growing apart” and “xenophobia and prejudice are abundant,” the director wrote in a statement. And indeed, “No Man’s Land” is less about revenge than it is about empathy and atonement, but I’m not sure Jackson was the best point of focus. He is a nice-looking kid with a lot to learn, but also a little dim-witted and dull. He is neither hero nor anti-hero, he’s just a victim of the increasingly improbable and sometimes downright silly plot.

As far as the performances go, the most compelling ones are from Lopez and Jimenez, who don’t get nearly enough to do. The story would have benefitted from a little more Gustavo and a little less Jackson.

Conor Allyn is clearly a talented director and has a lot of reverence for the Western genre, but for as good and lofty as it’s intentions are, “No Man’s Land” comes up short.

“No Man’s Land,” an IFC Films release in select theaters Jan. 22, is rated PG-13 by the Motion Picture Association of America for “some strong violence and language.” Running time: 114 minutes. Two stars out of four.

Hutch is an approximately two-year-old lab mix. He recently came to us with several other dogs from Tennessee. He is super handsome and full of…

(Family Features) Appetizer-sized portions and small bites of all sorts are ideal for breakfast spreads, and these Pastry Brunch Cups are perfect for starting a…

Today, I’d like to talk a bit about something that most of us try to avoid, even though it’s a perfectly normal and natural part…

From staff reports Youth Connection will hold a bowling fundraiser as a COVID-friendly alternative to its annual Bowl-A-Palooza. Participants who raise $50 or more by…

From staff reports Students at Franklin and Rocky Grove high schools will present “The Theory of Relativity” at 7 p.m. Friday and Saturday, March 12-13….

WASHINGTON (AP) — The Senate steered on Friday toward a voting marathon on Democrats’ $1.9 trillion COVID-19 relief bill after enduring an extraordinary half-day holdup…

The Associated Press Imagine being trapped in the confines of your own neighborhood, losing a sense of the outside world — and of yourself —…

(Culinary.net) It’s that time of year again when nearly everyone wants to be outside all day, every day. These are the times kids have been…

Starsky is an approximately two-year-old lab mix. He recently came to us with several other dogs from Tennessee. He is super handsome and full of…

From staff reports Christian Life Academy high school students raised money for a program that will benefit people outside their school, and they succeeded beyond…