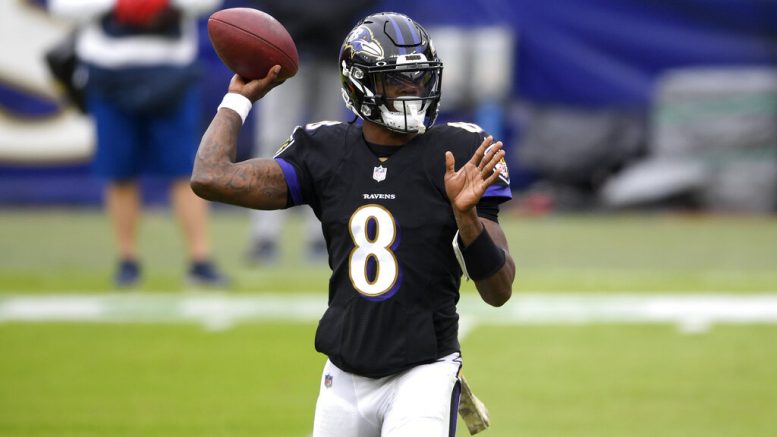 Baltimore Ravens quarterback Lamar Jackson throws a pass against the Tennessee Titans during the first half of an NFL football game, Sunday, Nov. 22, 2020, in Baltimore. (AP)

With reigning NFL MVP Lamar Jackson under quarantine as part of an outbreak of COVID-19 that has ravaged the Baltimore Ravens, the team has turned its focus from breaking out of a slump to simply getting healthy and back to practice.

The Ravens have more than a dozen players on the reserve/COVID-19 list, and their training facility is closed to prevent the spread of the virus . Jackson tested positive this week and will not play against the unbeaten Pittsburgh Steelers next Tuesday night, a game that was originally scheduled for Thanksgiving night and postponed to Sunday before the NFL moved the game again.

The makeup for the makeup will be held at 8 p.m. ET and telecast nationally by NBC.

With that game moving to Tuesday, Baltimore’s game against Dallas, scheduled for Thursday, Dec. 3, will instead be played at 5 o’clock on Monday, Dec. 7 and telecast by FOX/NFL Net/Amazon.

The NFL also has ordered all team facilities not involving teams playing Monday or Tuesday to be closed on those days. The Eagles and Seahawks play Monday night, and the Ravens and Steelers play on Tuesday.

“We appreciate the efforts of the NFL and Pittsburgh Steelers throughout this process, while we all work to create an environment that keeps the health and safety of everyone involved at the forefront of each decision,” Ravens coach John Harbaugh said. “Our organization has a plan in place, and we will be prepared to play the Steelers. We thank everyone for their adaptability and look forward to the challenge of facing a very good football team at Heinz Field on Tuesday night.”

Baltimore (6-4) will be decidedly short-handed against Pittsburgh (10-0).

A year ago, the Ravens finished with the best regular-season record in the NFL behind the play of Jackson, who threw 36 touchdown passes and set a single-season record for yards rushing by a quarterback. Now Jackson is part of a massive breakdown by a team that couldn’t avoid COVID-19 in the midst of a season the NFL staged in the middle of a pandemic.

Baltimore’s problems started after an overtime loss to Tennessee on Sunday, the third defeat in four games for a team that has gone from a 5-1 start to scrambling to make the playoffs for a third straight year.

Ingram and Dobbins were placed on the reserve/COVID-19 list the following day, starting a chain reaction that has decimated the roster.

Robert Griffin III is slated to start at quarterback for the Ravens on Tuesday against the Steelers. He will be taking snaps from a third-string center and handing off to backup running backs Gus Edwards and Justice Hill.

“We just want to contain this outbreak! Speaking from experience … you don’t want to catch COVID!,” Campbell wrote on Twitter. “This virus is brutal! I pray no one else has to go thru this. This is bigger than football.”

The Ravens have disciplined one of their staffers for failure to follow protocol, reportedly a strength and conditioning coach.

This isn’t the first time this season COVID-19 has toyed with Pittsburgh’s schedule.

The Steelers were scheduled to play Tennessee in Nashville on Sunday, Oct. 4. The league then pushed the game to either Monday or Tuesday. When the positive tests continued to roll in for the Titans, the NFL eventually moved the game to Sunday, Oct. 25, forcing the Steelers, in essence, to give up their scheduled bye initially set for Sunday, Nov. 1 — and finish the regular season by playing 13 consecutive weeks.

Steelers head coach Mike Tomlin stressed he was hardly concerned with the switch, saying emphatically “we do not care” when asked about the team’s routine being thrown off.

Pittsburgh has cruised along anyway, though the league’s last unbeaten team has been forced to deal with its own COVID-19 issues in recent weeks. Tight end Vance McDonald tested positive following a win over Dallas earlier this month. Quarterback Ben Roethlisberger and inside linebacker Vince Williams were among a handful of players forced to self-quarantine for five days due to contact tracing. Roethlisberger and Williams still ended up playing in what became a 36-10 rout of Cincinnati.

In a sign of just how pervasive COVID-19 has become, shortly after the league announced it was moving the contest to Tuesday, the Steelers placed defensive end Stephon Tuitt, offensive lineman Jerald Hawkins and defensive tackle Isaiah Buggs on the COVID-19 reserve/injured list.

Tuitt is in the middle of a career year. His seven sacks rank third on the team behind outside linebackers T.J. Watt and Bud Dupree.