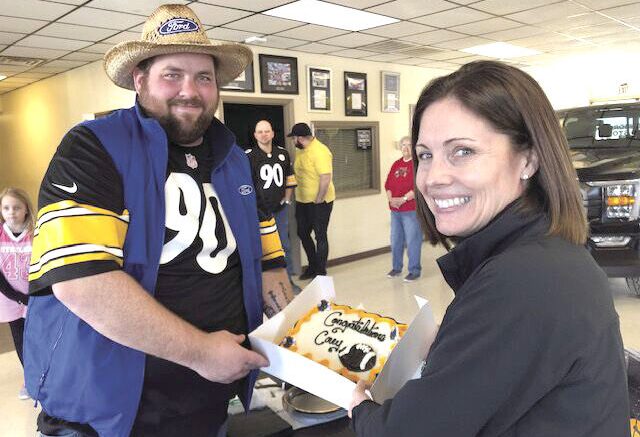 Amy Phillis, owner of the Ford dealership in Seneca, presented Corey Huth with a congratulatory cake when the Pleasantville man picked up his new Ford F-150 on Friday. (Submitted photo)

A Pleasantville man is driving around in a new Ford truck, thanks to his favorite football team — and his wife.

Huth picked up his new ride Friday at Griffin Phillis Ford in Seneca.

Huth credits his wife for getting them tickets to a pre-season Steelers game against the Detroit Lions. When the couple arrived at Heinz Field, they were approached by a Neighborhood Ford Store brand ambassador who asked if they wanted to sign up for a chance to win the truck.

“I did remember reading about this contest before. There were three winners in a row, and they were all named Tom,” Huth recalled, adding that he’d briefly considered a name change when he learned that.

The lifelong Steelers fan is now among nine winners in the annual contest. All have received a black and gold-wrapped Ford F-150 and tickets to a fan-appreciation Steelers game.

“After pausing the sweepstakes last year due to COVID, we wanted to come back with renewed vigor,” said Joseph Thurby, chairman of Neighborhood Ford Store.

“We decided to first choose 10 finalists from among the thousands of eligible entries entered both in-person and online, invite these folks to Ford’s private hospitality tent, give them tickets to the Thank-You Fans game against the Cleveland Browns, and then bring them on the field to reveal the winner of the official truck,” said Thurby, who was present Friday at the Ford dealership in Seneca to celebrate with Huth and his family.

Joining Thurby in presenting the truck to Huth was Amy Phillis, owner and general manager of the Seneca dealership.

Thurby said the 10 finalists drew numbers during halftime of the game.

The numbers corresponded to blue boxes on the sideline of the football field, and it turned out that Huth drew the box that contained the key to the Ford truck.

The nine finalists who didn’t get the key in their blue boxes received Steelers gift cards.

Days after winning the truck, Huth was still processing the fact that he won the truck. He said it has been “a surreal experience,” but his family members say “it’s for real.” Many of them were present for the celebration on Friday.

The Huths have five daughters ranging in age from 1 to 10.

The girls have been winners, too, Huth said.

“When I picked my daughters up from school the next day they said, ‘Dad! Dad! We were the most popular kids in school because you won the Pittsburgh Steelers truck!’” Huth said.

Neighborhood Ford Store is an 11-year sponsor of the Pittsburgh Steelers.