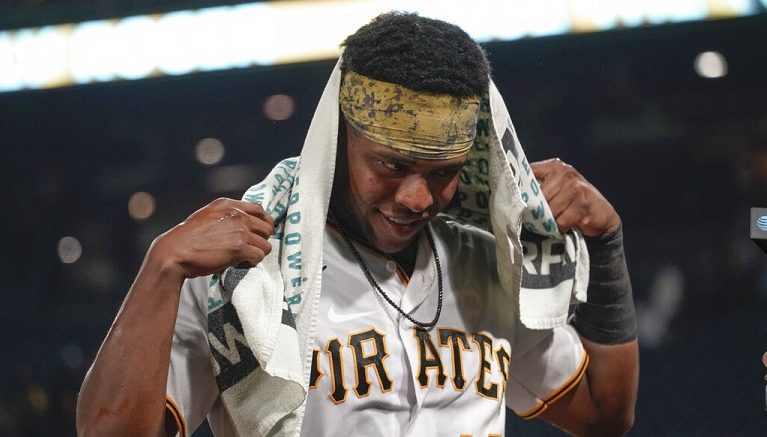 Pittsburgh Pirates' Ke'Bryan Hayes wipes his head after being doused by teammates after he drove in the winning run in the team's baseball game against the Washington Nationals, Friday, Sept. 10, 2021, in Pittsburgh. The Pirates won 4-3. (AP)

PITTSBURGH (AP) — Josh Bell offered the Pittsburgh Pirates a reminder of what might have been. Ke’Bryan Hayes provided a glimpse of what still could be.

Hayes capped off a ninth-inning rally with an RBI single as the Pirates slipped past the Washington Nationals 4-3 on Friday night to spoil Bell’s return to PNC Park.

Hayes completed a two-run comeback by sending a pitch from Washington reliever Alberto Baldonado to right field, scoring Ben Gamel from third for the first walk-off hit of his career.

“I knew a single was going to win the game so I just tried to hit it low and hard,” said Hayes, a rookie third baseman who is a key part of the rebuilding Pirates’ future.

Bell, a former second-round pick who played five seasons in Pittsburgh before being traded to Washington last December, hit his 26th home run of the season for the Nationals. His solo shot in the sixth gave the Nationals a two-run lead the overtaxed bullpen couldn’t quite hold.

Pittsburgh trailed 3-2 going into the ninth but quickly put two men on off Washington rookie reliever Patrick Murphy (0-2). Murphy gave way to Baldonado, who retired Cole Tucker but allowed the tying run to score on a groundout to shortstop by Colin Moran.

Hayes then won it in what he guessed was his first walk-off hit since high school. The single finished off a two-hit night and boosted Hayes’ average to .391 (9 for 23) since being moved to the leadoff spot last weekend.

Chad Kuhl (5-6) earned the victory after pitching a scoreless ninth. Hayes and Anthony Alford had two hits apiece for Pittsburgh. Alford’s solo homer in the seventh pulled the Pirates within a run.

Bell, an All-Star 2019 who was flipped to Washington in exchange for prospects as part of a top-to-bottom rebuild in Pittsburgh, received a warm ovation from the modest crowd, many of them wearing shirts or jerseys emblazoned with the No. 55 Bell donned during his five-year stay.

Now wearing No. 19 for Washington, Bell tipped his red batting helmet in return before drawing a walk. In the sixth, he showcased a flash of the switch-hitting power that the Pirates hoped at one point would be a fixture in their lineup for years to come.

Batting right-handed, Bell stepped in against left-handed reliever Pittsburgh Sam Howard and delivered a long blast over the Notch in left-center. It’s a place he found occasionally while hitting left-handed but never as a righty during his 269 previous games at PNC Park, all of them for the home team.

“I knew it was going (out) just based off the feel and knowing the park,” Bell said. “I just haven’t felt that right-handed. It was nice to feel that.”

It’s a familiar feeling for Bell. Drafted a decade ago as a strapping teenaged outfielder, he reached the majors in 2016 as a first baseman and willingly embraced the role as the face of the franchise after star center fielder Andrew McCutchen was traded in January 2018.

Bell flourished in the first half of 2019, making the All-Star team after a torrid stretch in which he hit .302 with 27 home runs. He faded down the stretch and so did the Pirates, whose second-half swoon led to a franchise-wide reboot that focused on amassing as many prospects as possible.

Asked before the game if he was experiencing deja vu, Bell laughed and said he’s excited about Washington’s future.

The Pirates are too, with Hayes considered an important piece of the puzzle. Hayes arrived in Pittsburgh last fall throwing across the diamond to Bell. Seeing Bell in the visiting dugout was weird, but the son of longtime major leaguer Charlie Hayes is well versed in the business of the game.

“Some things don’t pan out and some things do pan out,” Hayes said of Bell. “I definitely miss him.”

Pirates: Starting pitcher Steven Brault exited with left arm discomfort after throwing 42 pitches in two innings. He spent the first four months of the season on the injured list with left lat strain.

Pirates: Wil Crowe (3-7, 5.94), part of the trade that sent Bell to the Nationals, will face his former organization on Saturday.