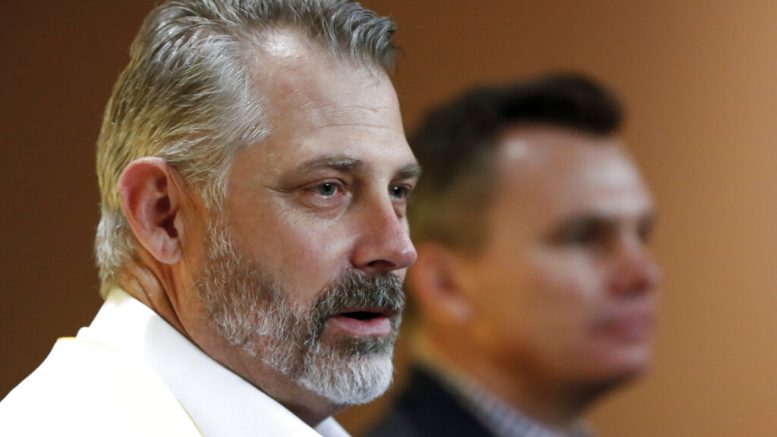 This file photo from Dec. 4, 2019, shows Derek Shelton, left, as he takes questions during a news conference where he was introduced as the new manager of the Pittsburgh Pirates baseball team by general manager Ben Cherington, right, in Pittsburgh. The Pirates will have a fresh look in 2020, from their new alternate road uniforms to a totally overhauled front office. (AP)

PITTSBURGH (AP) — Derek Shelton isn’t big on meetings. Or at least, having meetings just to have meetings. The new Pittsburgh Pirates manager would prefer to see his players working out on the field rather than sitting in chairs.

“It loses its luster,” Shelton said. “It’s like if you yell a lot, it becomes, ‘He’s just yelling.’ If you have a ton of meetings guys (tune out). … We are going to be specific.”

Besides, Shelton has already done plenty of talking (and plenty of listening) since being hired last November to replace Clint Hurdle, fired on the final day of a miserable 2019 that saw the Pirates sink to last in the NL Central. Shelton is eager to pull on a uniform when pitchers and catchers report for spring training at Pirates City and see what he’s got on his hands.

“We’re different than most clubs because we need to put eyes on guys,” Shelton said. “You can watch video or watch game simulation but it doesn’t go to the eye test.”

Shelton’s arrival marked the final piece of a massive leadership overhaul by the Pirates, who parted ways with Hurdle, general manager Neal Huntington and team president Frank Coonelly following a 25-48 second half. Poor play, particularly by the injury-scarred starting rotation, was just part of the problem. Chemistry inside the clubhouse was a mess and All-Star closer Felipe Vazquez’s arrest in September on felony charges stemming from an improper sexual relationship with a minor put an ugly exclamation point on three months of misery.

While owner Bob Nutting gutted the front office — hiring Travis Williams as president and Ben Cherington as general manager — the club did little to tweak the roster, the only major move coming in late January when the Pirates sent two-time Gold Glove centerfielder Starling Marte to Arizona for a pair of 19-year-old prospects.

“There’s excitement for the group of players we have,” Cherington said. “Our job is to hopefully help some of them continue to grow their game.”

Pittsburgh will debut alternate road uniforms this season, though the players wearing them will largely be the same as the ones who suffered through the team’s worst finish in a decade. The team needs an outfielder to replace Marte and there will be a wide-open competition at catcher after the club declined to pick up Elias Diaz’s option. Veteran pitchers Derek Holland and Robbie Erlin were both given invitations to camp, and there’s a spot in the starting rotation open with ace Jameson Taillon out for the year while recovering from a second Tommy John surgery on his right arm.

Third baseman Ke’Bryan Hayes’ sprint through the minors stalled a bit in Triple-A Indianapolis, where he hit .265 with 10 home runs in 110 games. Still, he’ll get a long look as Pittsburgh searches for someone to challenge Colin Moran.

Shelton wasn’t joking when he offered recently that the only thing he’s sure of is that first baseman Josh Bell will handle clean-up duties. Bell is coming off a breakout 2019 in which he made the All-Star team for the first time on his way to hitting .277 with 37 home runs and 116 RBIs.

Pittsburgh is counting heavily on right fielder Gregory Polanco to pick up some of the slack created by Marte’s departure. That’s a big if for a player who has played just 42 games since Sept. 7, 2018, due to lingering left shoulder issues. While Jacob Stallings proved to be an adept game caller at catcher last season, he will have to fight off a challenge from Luke Maile, John Ryan Murphy and Andrew Susac among others.

All players are due to report to Pirates City by Feb. 16, with the first full workout scheduled for the following day. The spring training opener is on Feb. 22 against Minnesota and the 2020 season opens on March 26 in Tampa Bay.