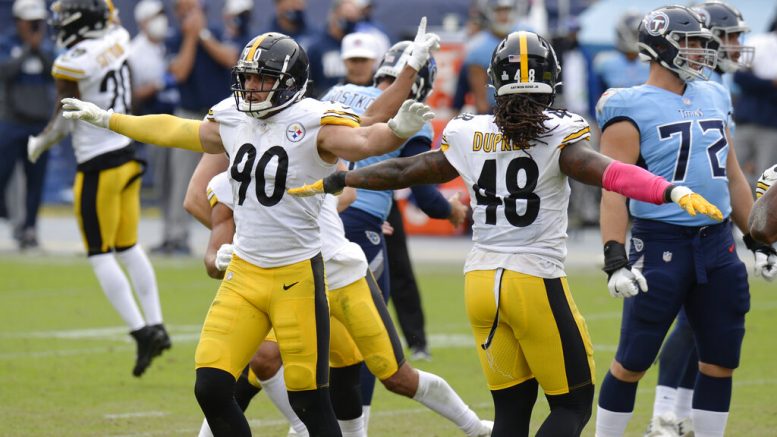 Pittsburgh Steelers outside linebackers T.J. Watt (90) and Bud Dupree (48) celebrate after a 45-yard field goal attempt by Tennessee Titans kicker Stephen Gostkowski was no good in the final seconds of the fourth quarter in an NFL football game Sunday, Oct. 25, 2020, in Nashville, Tenn. The Steelers won 27-24. (AP)

PITTSBURGH (AP) — To hear the NFL’s last unbeaten team tell it, the Pittsburgh Steelers are perfect in record only.

Don’t get defensive end Cam Heyward wrong. He appreciates the fact the Steelers (6-0) are off to the second-best start in the franchise’s 87-year history after escaping Tennessee on Sunday. He’s pleased with the results. The process? Well, the process needs some work after Pittsburgh allowed Titans to nearly erase a 20-point second-half deficit.

“There’s a way that we like to play and there’s a lot of meat on that bone as coach likes to say,” Heyward said. “I’m fine saying that. I believe in the guys we got, and I’m confident we can do more.”

Pittsburgh hinted at what it could be during a dominant first half in which it scored on each of its first four possessions while the defense bottled up Titans star running back Derrick Henry. The swagger vanished over the final 30 minutes amid uncharacteristically sloppy play by quarterback Ben Roethlisberger and Tennessee’s relentlessness.

It didn’t have to be that close. Yet in four of Pittsburgh’s six victories, the Steelers have found themselves in a dogfight late regardless of the pedigree of the opponent. They needed a late fourth-down sack to stop Denver’s comeback in Week 2. Houston had the ball in Pittsburgh territory trailing by one early in the fourth quarter in Week 3 before Mike Hilton’s interception put away the Texans. A 17-point second-half advantage over undermanned Philadelphia nearly vanished in Week 5. The Titans looked outclassed early before putting together a rally that’s become their calling card.

The comeback left Heyward and the rest of the defense in hardly celebratory moods afterward, a byproduct of their incredibly high standards.

“We haven’t played our best game in a lot of games that we played this year, but we are still pushing and still fighting through and staying together as a team and winning football games,” safety Terrell Edmunds said. “We hold ourselves on a pedestal, and we want to be this great team. That’s what we are striving for, and when we don’t play a great game everyone is upset in some ways. But at the end of the day, I am still happy we are 6-0.”

In most divisions, such a torrid stretch would give the Steelers a comfortable lead. In the wretched NFC East, they’d already be closing in on a division title. Not in the AFC North. Baltimore is 5-1 and well-rested ahead of a visit by Pittsburgh next Sunday.

“We realize that we’ve got AFC North ball on next week on the road,” coach Mike Tomlin said. “We’re going to a group that has seven days’ advantage on us, so there’s a lot for us to be urgent about. We won’t spend a lot of time celebrating this or appreciating this because it’s just more work that lies ahead.”

The run defense succeeded where most teams have failed over the past 14 months by keeping Henry in check for long stretches. Inside linebacker Rob Spillane, making his first career start in place of injured Devin Bush, survived a memorable collision with Henry at the goal line when he ran into the 6-foot-3, 247-pound Henry at full speed and stuffed him for no gain.

Sure, Spillane needed to exit briefly with his left shoulder in pain and yes, Henry ended up scoring a few plays later. The points ended up not mattering in the end, while Spillane’s fearlessness sent a message that the loss of Bush doesn’t necessarily mean the NFL’s second-ranked run defense will suffer greatly in his absence.

Let’s nitpick. If there is one issue facing the defense, it’s the penchant for giving up chunk plays. The game’s momentum effectively flipped midway through the third quarter when A.J. Brown collected a short pass from Ryan Tannehill, caught Steelers safety Minkah Fitzpatrick flat-footed and raced 73 yards for a touchdown. The score was the fifth score of 20 yards or more allowed this season.

Wide receiver JuJu Smith-Schuster offered a reminder of why he’s still Roethlisberger’s top target by catching nine passes for 85 yards, including several drive extenders on grabs that were hardly routine. Smith-Schuster has gone out of his way to praise the rise of rookie Chase Claypool and budding second-year star Diontae Johnson. Yet his combination of physicality and soft hands offers a dimension no one else in the receivers’ room can match.

Roethlisberger expertly picked apart the Titans and his decision-making is one of the reasons the Steelers held the ball for more than 36 minutes, effectively playing keep away against a team that came in averaging more than 32 points a game.

Still, he also threw three picks, or two more than he’d tossed all season coming in. While the one at the end of the first half on a desperation pass was no big deal, the decision to throw to Smith-Schuster in double coverage in the end zone with 2:40 remaining was curious. The pass was too low and ended up in the arms of Tennessee’s Amani Hooker, setting up the Titans’ last-gasp drive. While a touchdown would have salted the game, the unnecessary risk nearly backfired.

Pittsburgh is relatively healthy going into the showdown with the Ravens. Johnson called his late exit for what he termed an ankle bruise no big deal. Fullback Derek Watt (hamstring) and nickelback Mike Hilton (shoulder) could return against Baltimore. Hilton’s presence could be critical to hemming in Ravens quarterback Lamar Jackson.

5 — number of times the Steelers sacked Jackson the previous time they faced him, a 26-23 Baltimore victory last October.

Matching the 1978 team’s 7-0 start that ranks as the best in franchise history. It won’t be easy against the two-time defending division champs. The Steelers are 4-6 in their past 10 trips to Baltimore.