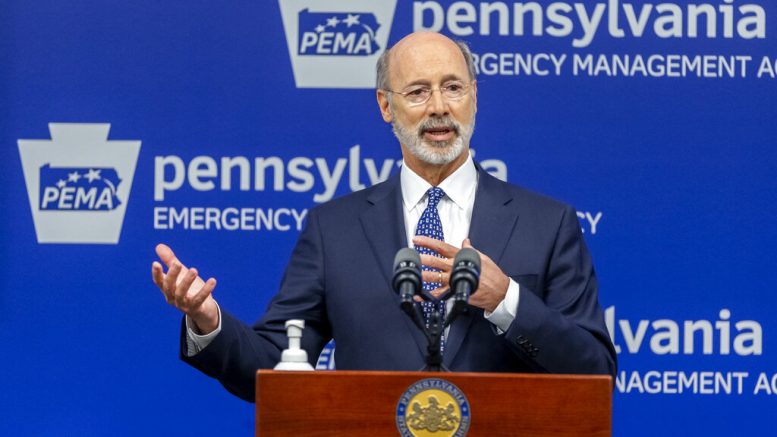 Gov. Tom Wolf on Thursday extended a statewide moratorium on foreclosures and evictions until Aug. 31, saying renters need more breathing room in the midst of the pandemic.

The Wolf administration has been facing growing calls to extend the four-month-old moratorium — which had been set to lapse Friday — with housing advocates and others predicting a rush to the courthouse and a wave of evictions and homelessness. House and Senate Democrats had also been pressing the Democratic governor for an extension, with landlords opposed.

“I am taking this action to help families know they will have a roof over their heads and a place to live while all of us fight the COVID-19 pandemic,” Wolf said in a news release. “It takes one more burden off of people who are struggling and ensures that families can remain in their homes so they can protect their health and well-being.”

As justification, the Wolf administration cited the recent uptick in COVID-19 cases statewide, the national surge in virus infections and the need to keep people in their homes to help prevent the spread.

Wolf’s ban on foreclosures and evictions does not cover a tenant who damages property, breaks the law or breaches the lease in some other way aside from nonpayment of rent or overstaying a lease.

Advocacy groups hailed the extension but said the ban on evictions should last until the virus is brought under control.

“It’s important and welcome, but we have to be thinking about what’s going to happen down the road. It’s like you are kicking the can down the road rather than trying to resolve the crisis,” said Patty Torres, organizing director for Make the Road Pennsylvania, an advocacy group for Hispanic immigrants.

Wendy Macias, 17, a Make the Road member, said her family has been economically battered by the virus and has fallen three months behind on rent. She said their landlord calls and texts often to demand rent, won’t agree to a payment plan and has threatened eviction.

Landlords have been waging a legal fight against the moratorium, saying they are hard-pressed to keep up with taxes, insurance, utilities, maintenance and mortgage payments without the ability to enforce lease agreements. The state Supreme Court has yet to rule on a lawsuit filed by the Pennsylvania Residential Owners Association and individual landlords.

“I can only imagine that a family that can’t pay their rent is under a lot of stress. I also know that many rental housing providers who are not getting their rent and are equally unable to pay their financial obligations are under as much stress,” she said.

Manny Mercado, a landlord in Reading, said he was planning to evict a tenant when the pandemic struck in early March. He said the tenant has since used the pandemic as an excuse to stop paying rent and is now thousands of dollars behind, while his own bills on the property keep coming.

“As a landlord you pretty much sit there, powerless,” said Mercado, who was planning to go to court as soon as the moratorium expired. “It’s really frustrating.”

Pennsylvania is using $175 million of its federal coronavirus relief money to provide rental assistance to eligible tenants and mortgage relief to homeowners, but the money has not started flowing yet and landlords say a $750-per-month cap on payments will not be enough to cover their costs on many housing units, especially ones large enough to accommodate a family.

Wolf’s new executive order does not apply to landlords taking part in the state’s rent relief program because the program already includes protections for renters. It also doesn’t apply to renters who live in a building covered by a federal moratorium on evictions and foreclosures, the Wolf administration said.

In other coronavirus-related developments in Pennsylvania on Thursday:

The Pennsylvania Department of Health said 719 more people have tested positive for the coronavirus, bringing the statewide total to nearly 93,000.

Nearly half of the new cases came from Philadelphia and from Allegheny County, which includes Pittsburgh.

There were 36 new deaths. The statewide death toll stands at 6,848.

The number of infections is thought to be far higher than the state’s confirmed case count because many people have not been tested, and studies suggest people can be infected without feeling sick.

The Wolf administration has ordered people to wear masks in all businesses and in public places outdoors where social distancing is not possible.