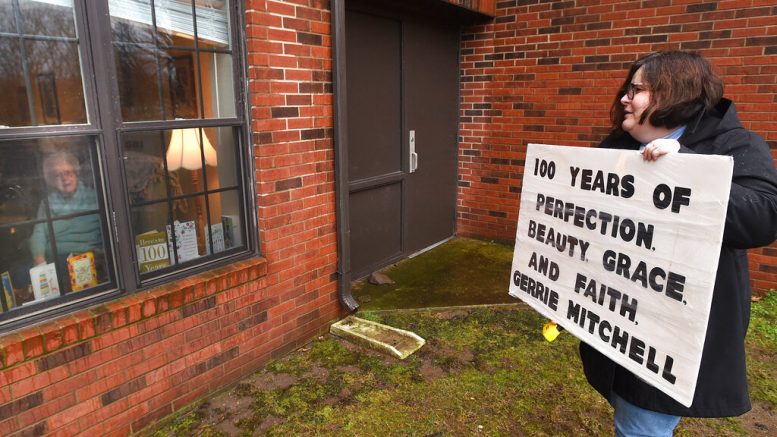 Geraldine "Gerrie" Mitchell, left, a resident at St. Joseph's Apartments, is greeted by her granddaughter Jennifer Frick, on Saturday, March 28, 2020 in Erie. It was Mitchell's 100th birthday. Mitchell is on a stay-at-home order to slow the spread of COVID-19. (AP)

HARRISBURG (AP) — The number of confirmed COVID-19 cases in Pennsylvania increased by more than 640 over the past day and four more people died, the state Health Department announced Sunday.

The state’s health secretary, Dr. Rachel Levine, said in a video news conference that 38 people in all have died in the state after being diagnosed with the coronavirus infection. In all, nearly 3,400 Pennsylvanians have tested positive, and infections have been confirmed in 58 of the 67 counties.

Most of the people who have died or required hospitalization in Pennsylvania have been 65 or older.

For most people, the coronavirus causes mild or moderate symptoms, such as fever and cough that clear up in two to three weeks. For some, especially older adults and people with existing health problems, it can cause more severe illness, including pneumonia, or death.

A look at coronavirus-related developments in Pennsylvania:

The medical director at a western Pennsylvania nursing home said 14 residents have become infected with the coronavirus and additional tests are pending.

Dr. Dave Thimons told the Pittsburgh Post-Gazette that staff are doing what they can to help those affected at the Brighton Rehabilitation and Wellness Center in Beaver.

Levine said there have been 64 confirmed cases of COVID-19 in nursing homes across Pennsylvania, and most of them are in the state’s southeastern region of Philadelphia and its suburbs.

Thirty-six of the state’s 695 nursing homes have confirmed cases. As of three days ago, there had been 33 confirmed COVID-19 cases in 17 Pennsylvania nursing homes, the Health Department said.

At the Brighton facility, most of the positive tests were received on Saturday, the paper said. At least one patient with more severe symptoms was transferred to a hospital but most remain in the 500-bed nursing home. The facility has set up a COVID-19 unit to address the outbreak.

The Pennsylvania Office of Administration said Sunday that about 2,500 state workers were out of a job as of Friday because of the coronavirus.

Agency spokesman Dan Egan said Sunday the job cuts were in response to a decline in state revenues in the wake of the COVID-19 outbreak.

Egan said the workers were either laid off or put into a leave-without-pay status. He described them as generally being temporary or seasonal employees, part-timers and interns. Most will qualify for unemployment benefits.

He gave as examples temporary clerical staff and people who work at the Transportation or Revenue departments on a seasonal basis.

“In many cases, these employees were already not working and not being paid, either due to offices being closed or slowing down of seasonal operations,” Egan said in an email.

The layoffs were first reported Sunday by Spotlight PA.

The first state prison inmate in Pennsylvania to test positive for COVID-19 is a prisoner at the State Correctional Institution-Phoenix in the Philadelphia suburbs, the Corrections Department announced Sunday.

The inmate is being isolated from others in the prison’s infirmary and their housing unit is under quarantine. The inmate has underlying health conditions.

Officials have traced the infected inmate’s interactions with others and increased cleaning of the prison is continuing, the agency announced.

Migrant advocates told The Philadelphia Inquirer that immigration detainees began a hunger strike in a central Pennsylvania prison to demand release during the coronavirus pandemic.

Federal immigration authorities told the paper Saturday that some detainees at the York County Prison had recently refused meals, while advocates said it was at least 180 people.

Participants in the hunger strike are worried that prison staff could spread COVID-19 and that detainees who get sick may not receive proper medical care, the paper reported.

Gov. Tom Wolf made a formal request for the declaration on Sunday, saying it would provide additional help to governments responding to the crisis.

Wolf, a Democrat, signed a disaster emergency proclamation for Pennsylvania on March 6 and it remains in effect.