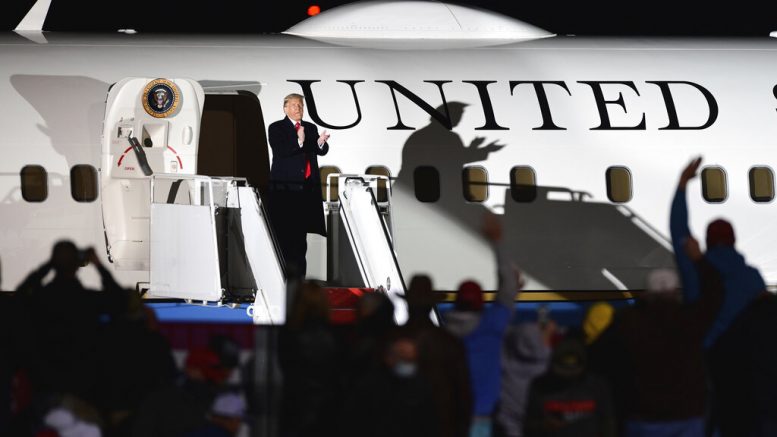 HARRISBURG (AP) — For anxiety over voting and ballot counting in this year’s presidential election, it’s hard to top Pennsylvania.

Election officials in Philadelphia, home to one-fifth of the state’s Democratic voters, have been sued by President Donald Trump’s campaign, blasted by the president as overseeing a place “where bad things happen” and forced to explain security measures after a theft from a warehouse full of election equipment.

Add to that an investigation into military ballots that were mistakenly discarded in one swing county, partisan sniping in the state Capitol over the processing of what is expected to be an avalanche of mailed-in ballots and an 11th hour attempt by Republican lawmakers to create an election integrity commission.

One of the most hotly contested presidential battleground states is trying to conduct a pandemic election in a hyper-partisan environment where every move related to the voting process faces scrutiny from both sides. State and local election officials say they are doing all they can to make sure Pennsylvania doesn’t end up like Florida two decades ago, when the last drawn-out presidential tally ended before the U.S. Supreme Court.

“For years, we have trusted our election officials to be reliable and nonpartisan. Why should we suddenly not trust them?” said Eileen Olmsted with the League of Women Voters in Pennsylvania. “A lot of this is based on the perception of voter fraud, which there is absolutely no evidence of.”

In many ways, Pennsylvania election officials are in the same position as their colleagues across the country, with the pandemic forcing them to alter their normal procedures. Other states also are using new voting systems this year and facing lawsuits over election procedures.

Republicans have signaled that the battle for who wins Pennsylvania’s 20 electoral votes could extend past Election Day amid challenges to individual ballots.

“We are seeing the kind of incidents that are likely to happen in every election be blown up to mean there is something fundamentally wrong with Pennsylvania election administration and we can’t trust the Department of State or the counties to give us an accurate count,” said Suzanne Almeida with Common Cause Pennsylvania. “There are any number of reasons why that’s not true.”

The biggest challenge could simply be verifying and counting the crush of mail-in ballots, with some 3 million voters expected to request them. That would be over 10 times the number from four years ago. As of Tuesday, more than 2.6 million registered voters had already applied for mail-in ballots.

The Republican-controlled state Legislature has so far refused to allow local election offices to start processing those ballots before Election Day. That all but ensures the vote count will continue for days, if not weeks, and perhaps delay a final result in the presidential election.

Yet for all the accusations, investigations and political fear-mongering, many voters so far say they have had a problem-free experience registering and casting ballots. That offers a glimmer of hope that perhaps Pennsylvania will avoid the national spotlight for the wrong reasons on Election Day.

Elzena Hall changed her registration from independent to Democrat and cast her ballot last week at a satellite election office in Philadelphia.

“Switching and registering and voting … it was like so easy,” said Hall, 48, who was given a T-shirt saying she had voted early.

Susan Stirling, a university academic adviser, had always planned to vote in-person on Election Day because she was concerned about dropping a ballot in the mail. But she had Monday off, so she decided to cast her ballot early at one of the city’s election centers.

“It went really quickly and smoothly,” she said.

Whether that continues could hinge on several legal cases that remain unresolved. With voting already underway, judges could still decide fundamental questions about running the election and which ballots get counted.

One lawsuit before the U.S. Supreme Court involves a state court order to allow late-arriving mail-in ballots to be counted for up to three days after Election Day. Another involves the Trump campaign’s effort to limit the use of drop boxes.

“A huge concern I have is the confusion that outstanding litigation causes with election officials and voters,” said Witold J. Walczak, the legal director of the American Civil Liberties Union of Pennsylvania. “Confusion does not promote safe, accessible and secure elections.”

The answer seems obvious to Katy Parr, a 30-year-old pursuing a master’s degree at the University of Pennsylvania: Just make voting easier.

She’s a native of Colorado, one of five states to conduct elections almost entirely by mail. Parr said she was bewildered by the fight over drop boxes, which are used extensively in Colorado.

“It blows my mind how much of a fight it was here to have them,” said Parr, who cast her ballot at an election office in Philadelphia this week.

Republicans and the Trump campaign say they are only trying to protect the integrity of the election.

“His position was we have to have an election that is fair, and that every vote is counted and counted the right way,” said Bernadette Comfort, Trump’s state campaign chair.

Democrats use the same argument to criticize moves by Republicans. That includes lawmakers’ attempt to create a GOP-controlled legislative panel to investigate how the election is being conducted. Democrats called it an attempt to “steal” the election.

They also want the Republican-dominated legislature to repeal a requirement that mail-in ballots be rejected if voters fail to use a so-called secrecy envelope on the outside. A Philadelphia election official has said missing secrecy envelopes could trigger “electoral chaos” in November with potentially 100,000 or more ballots getting rejected across the state.

“What (Trump) has encouraged people to engage in is the only type of voter fraud that’s actually real, and that’s voter suppression,” said Democratic state Rep. Malcolm Kenyatta, of Philadelphia.

Against this backdrop, election officials are trying to prepare knowing that something is bound to go wrong with some aspect of the election system.

Nick Custodio, a deputy commissioner with Philadelphia’s election office, recalled a time two years ago when an election judge who was scheduled to open a polling place fell and broke her hip the morning of the election.

“The polling place didn’t open on time because this poor woman was sitting in the snow,” Custodio said. “Elections are put on by human beings. We’re in a situation where it’s gotten worse over the last few years, where anything happens is assumed to be malicious or some outside actor.”

When asked what keeps him up at night, Custodio said: “The sheer enormity of it.”