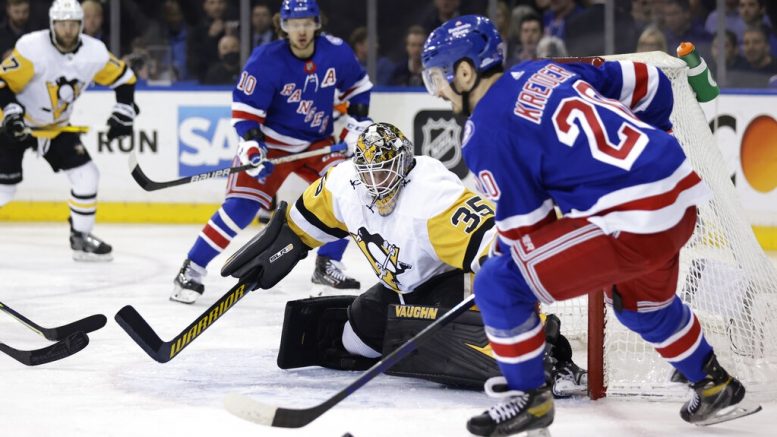 NEW YORK (AP) — Artemi Panarin is such a gifted passer, he looks to set up his teammates for goals. He can shoot, too, and he came through in a prime situation.

Panarin scored a power-play goal 4:46 into overtime and the New York Rangers beat the Pittsburgh Penguins 4-3 Sunday night to advance to the second round of the Stanley Cup playoffs.

“Overall, honestly, they’ve been letting me shoot since the first game,” Panarin said through a translator after he took six shots in Game 7 after totaling 17 in the first six. “Kind of my bad, I haven’t really been making those shots. But maybe I should listen to everyone’s advice and actually get out there and take shots.”

Rangers coach Gerard Gallant had a feeling Panarin was going to rise to the occasion in overtime.

“He’s the guy,” Gallant said, “when it was heading into overtime, I said to myself, ‘I know he’s going to score if we score. If we get the winning goal, it’s going to be him.”

Mika Zibanejad had a goal and two assists, and Chris Kreider and K’Andre Miller also scored for New York, which got its third straight comeback win after trailing 3-1 in the series. Andrew Copp had two assists and Igor Shesterkin stopped 42 shots.

The Rangers are the first team in NHL playoff history to record three consecutive comeback wins in elimination games within the same series.

“It’s a huge win for the team, for the organization,” defenseman Jacob Trouba said. “A gutsy performance, coming back again. That whole ‘No Quit In New York’ thing is pretty true with this group.”

The Rangers went on a power play 2:55 into overtime when Pittsburgh’s Brock McGinn was called for holding. Late in the advantage, Panarin got the puck on the right side and fired a shot from the right circle past Tristan Jarry.

The Rangers players mobbed Panarin along the boards in the left corner as the sold-out Madison Square Garden crowd went into a frenzy. New York advanced to the second round for the first time since 2017, when they lost to Ottawa.

New York will play Carolina next. The Hurricanes beat the Boston Bruins in Game 7 on Saturday night.

Evan Rodrigues had a goal and an assist, and Jake Guentzel and Danton Heinen also scored for the Penguins, who were ousted in the first playoff series for the fourth straight year. Jarry returned in goal and had 26 saves in his first game since April 14.

The Penguins also had captain Sidney Crosby back after he missed the last game with an upper body injury sustained midway through Game 5.

“Tonight, we’re on the wrong ends of some bounces,” Crosby said. “We played a great game tonight, we played some good hockey throughout the series. We didn’t get that next one tonight that was probably the difference but I think even when we had those leads we still played the right way. Tonight was an example of one game, anything can happen.”

Tyler Motte had a short-handed breakaway 8 1/2 minutes into the third period, but Jarry made a nice kick save on his forehand attempt to preserve Pittsburgh’s 3-2 lead.

Zibanejad scored on a shot from the inside edge of the left circle off a pass from Copp with 5:45 left to tie it with his third of the series — all in the last two games.

“We didn’t want the season to end,” Zibanejad said. “This has been a hard team all year. No matter how the game goes, whatever happens, we stick together. … All we can do is just work hard and do our best, stick together and good things will happen.”

Guentzel gave the Penguins a 2-1 lead on the power play with 9:42 left in the second as he kicked the puck up with his right skate and then swatted the puck out of the air with a backhand and in. The goal was upheld after a video review, giving Guentzel his eighth of the series.

Miller tied it for the Rangers 1:05 later as his shot from the top of the left circle deflected off the right skate of Penguins defenseman Mike Matheson in front and trickled across the goal line past a diving Jarry.

Rodrigues gave Pittsburgh a 3-2 lead on a short-handed breakaway as he skated in and beat Shesterkin with a backhander with 2:36 left in the middle period. It was his third of the series.

Kreider gave the Rangers a 1-0 lead 7:36 into the game with his fifth goal of the series. Zibanejad got his seventh assist.

The Penguins had an extended power play late in the first period. With the Rangers’ Ryan Strome and Pittsburgh’s Bryan Rust off for roughing, Trouba was sent off on a double-minor for high-sticking

The Penguins took advantage as Heinen tied it with 1:09 left with a goal that wasn’t credited until the play was stopped about 25 seconds later. From the left side, Heinen poked the puck in and raised his arms in celebration, but play continued as Rangers defenseman Adam Fox swept the puck away. Replays showed it came after the puck had crossed the line, giving Heinen his third of the series.

In addition to Jarry and Crosby, the Penguins also got forward Rickard Rakell back. Rakell hadn’t played since he suffered a lower body injury in Game 1. Defenseman Brian Dumoulin and forward Brian Boyle remained out with lower body injuries.