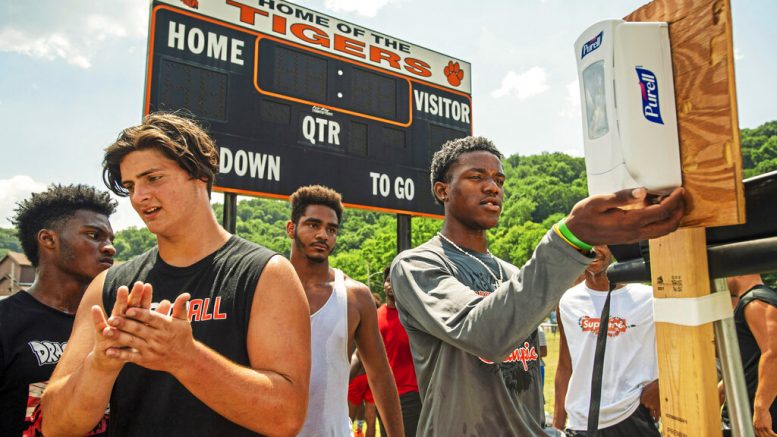 Beaver Falls High School football players Mitch Myers and Quadir Thomas sanitize their hands between drills during practice Thursday, July 2, 2020, in Beaver Falls. They will continue with practice even as about 20 others high schools will pause practices for a week due to concerns with the COVID-19 virus. (AP)

HARRISBURG (AP) — Pittsburgh and the rest of Allegheny County reported a near-record number of new coronavirus infections Wednesday as state health officials expressed concern about the situation in southwestern Pennsylvania, but made no move to reimpose pandemic restrictions in border counties that are also seeing increased spread.

Infections are rising sharply in border counties like Beaver, Butler, Washington and Westmoreland, and Pennsylvania’s health secretary, Dr. Rachel Levine, had signaled that mitigation measures were on the way, according to local officials who spoke with her. But Levine’s spokesperson said nothing was imminent.

“They told us an order was coming today,” Leslie Osche, Republican chairperson of the Butler County Board of Commissioners, said Wednesday, a day after she said she spoke with Levine. “We have no authority to close anything, nor would we.”

April Hutcheson, a Health Department spokesperson, said later Wednesday that Levine would not take immediate action. She did not explain the apparent change in plans.

“We are continually monitoring what is happening in Southwest Pennsylvania and are in communication with local officials to keep them up to date as to changes happening in their areas,” she said via email. “Even small case increases are concerning and are being watched very carefully. We are prepared to take action as necessary to protect residents from the spread of COVID-19 and prevent people from getting sick.”

Diana Irey Vaughan, Republican chairperson of the Washington County Board of Commissioners, said the county would not move on its own to shut down businesses, even if it had the authority to do so.

“At some point, there has to be personal responsibility,” Vaughan said.

Butler and Washington are among the plaintiffs in a federal lawsuit, filed in May and still pending, that challenged the constitutionality of Wolf’s statewide shutdown of businesses deemed “non-life-sustaining.” Wolf has since lifted many restrictions, and courts have consistently rejected challenges to his power to order businesses to close during the pandemic.

The Allegheny County Health Department reported that 230 additional people tested positive for the virus between June 23 and July 5. Allegheny has been struggling with a spike in infections as residents patronized eating and drinking establishments and headed to out-of-state virus hotspots, prompting health officials in the county of 1.2 million to impose restrictions last week on restaurants and bars, shutter a casino and limit gatherings.

On Wednesday, Allegheny’s health director, Dr. Debra Bogen, extended the restrictions through July 24, while loosening them somewhat to permit bars and restaurants to offer outdoor seating and allow gatherings of up to 50 people outside.

Across the state, the Philadelphia suburb of Delaware County cited an “alarming increase” in COVID-19 cases among young people and people visiting bars. County officials warned bar and restaurant owners to comply with public health orders and said businesses that fail to comply could face a fine or license suspension.

In other coronavirus-related developments in Pennsylvania on Wednesday:

The Wolf administration is facing more calls to extend a moratorium on evictions that is set to expire Friday.

A coalition of 55 advocacy groups sent a letter to Wolf on Wednesday urging him to extend the moratorium indefinitely, warning of a “massive wave” of evictions and homelessness if it is allowed to lapse.

“In the middle of an unprecedented global pandemic, the ability to shelter and be safe at home is lifesaving, something that shouldn’t be reserved just for those wealthy enough to continue paying rent,” said the letter, which was signed by variety of housing, labor, racial justice, health care and other advocacy groups.

On Tuesday, 45 House Democrats joined 20 of their Senate counterparts in asking Wolf for an extension. The administration had said it planned to reassess the moratorium ahead of its expiration.

Landlords have been waging a legal fight against the moratorium, saying they are hard-pressed to keep up with taxes, insurance, utilities, maintenance and mortgage payments without the ability to enforce lease agreements. The Supreme Court has yet to rule in the case.

There were 849 additional confirmed virus infections across Pennsylvania, driven in large part by the 230-case increase in Allegheny County and 90 additional confirmed infections in Philadelphia, health officials said. More than 92,000 people have tested positive for the virus or are considered probable virus cases since the beginning of the pandemic.

The number of infections is thought to be far higher than the state’s confirmed case count because many people have not been tested, and studies suggest people can be infected without feeling sick.

AUSTIN, Texas (AP) — The National Rifle Association announced Friday it has filed for bankruptcy protection and will seek to incorporate the nation’s most politically…

PHILADELPHIA (AP) — Gritty’s hat trick was that the mascot had one at all, a comically oversized Flyers cap he flung, frisbee-style, onto the ice….

MEMPHIS, Tenn. (AP) — Elvis Presley’s Graceland is now offering live online tours for fans around the world, including those who can’t travel to the…

I’m a squishmallow of a cat who loves people and attention. So my name Little Girl came from when I was younger. I was slim,…

I work in an interesting field, where change is celebrated, challenges are embraced, and differing thoughts are not just invited but needed. Redevelopment, after all,…

By JUDITH O. ETZEL Contributing writer Two requests to use city properties got different answers from Oil City Council at a meeting Thursday. In the…

WILMINGTON, Del. (AP) — President-elect Joe Biden has unveiled a $1.9 trillion coronavirus plan to end “a crisis of deep human suffering” by speeding up…

The Associated Press Joanne Rogers, an an accomplished concert pianist who celebrated and protected the legacy of her husband, the beloved children’s TV host Mister…

Hello! My name is Autumn! I used to be really shy when I first arrived here at the shelter. I started to really like the…

(Family Features) Time is of the essence in many kitchens across the country, especially during this busy season when everything seems to happen at once….