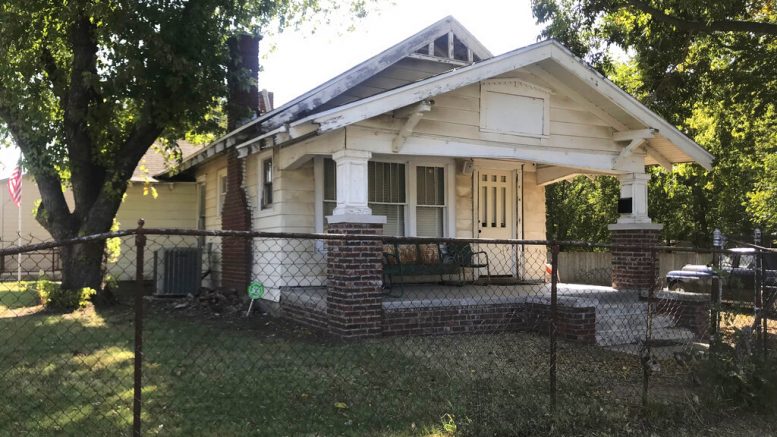 The exterior of a home used for the 1983 film “The Outsiders,” based on S.E. Hinton's classic 1967 novel, appears in Tulsa, Okla., Tuesday, Sept. 14, 2021. The home, which was purchased by rapper Danny Boy O'Connor, was converted into The Outsiders House Museum. (AP)

TULSA, Oklahoma (AP) — This summer, it was Leonardo DiCaprio. Then it was Green Day. A tiny museum in Tulsa, Oklahoma, dedicated to a movie classic and run by an entertainer, is drawing big names in the Heartland.

The Outsiders House Museum was created by Danny Boy O’Connor, formerly of the hip-hop group House of Pain. It’s been a labor of love for O’Connor, who bought the house several years ago and renovated it.

The modest white bungalow with a wide front porch was used as a central set in the 1983 film “The Outsiders,” which was based on S.E. Hinton’s classic 1967 novel of the same name.

“That was our ‘Gone with the Wind.’ That was our ‘American Graffiti.’ Every generation finds the cool archetypes of who we could be, and that for me was the movie,” O’Connor said in a recent interview inside the house. He said visitors have ranged “from 8 to 80 — to everything in between. It’s usually the whole family. It’s a family museum.”

The museum also includes memorabilia from the film set, including furniture, photos, posters, and the leather jacket worn by Dillon’s character, Dallas Winston.

“The Outsiders” takes place in Oklahoma in the 1960s and features rival teen gangs: the Socs, short for Socials, and the Greasers. The house was home to the Curtis brothers and a hangout for their Greaser friends.

The building was in disrepair when O’Connor bought it back in 2015 after visiting the tenants and tracking down the owner. Before he embarked on the project, he hadn’t been sure what he was going to do next, having plowed through most of his savings.

Still, when he would crisscross the country on tours or just traveling, he’d always make a beeline for Oklahoma.

“This is phenomenal. And I mean that in the true sense of the word. I didn’t know what I was doing. I saw a house from one of my favorite movies,” said O’Connor, 52.

He started a GoFundMe to raise money for repairs and restorations.

“Tulsans helped me,” he said. “People from the movie helped me. Okies helped me.”

DiCaprio, who was in northeast Oklahoma for filming of “Killers of the Flower Moon,” showed up to the Outsiders House during business hours and took a tour in July. He has since been photographed at other museums in the area, including the Oklahoma City National Memorial & Museum.

“He said anytime he does a movie, he tries to see a museum,” O’Connor said, adding that the actor had once read for a TV version of “The Outsiders.”

Soon other actors from “Killers of the Flower Moon” stopped by as well.

Green Day, in Tulsa for a surprise show at Cain’s Ballroom, also called and asked to stop by. “They came through and were fans as well,” O’Connor said, noting that frontman Billie Joe Armstrong has ties to Oklahoma — his mother is from the Sooner State.

Other visitors have included Hinton.

Now, O’Connor is preparing for a showing of a 4K Blu-ray edition of the film, part of a weekend of events Sept. 25-26. A plaque will be dedicated at Tulsa’s Circle Cinema, with remarks from O’Connor, Tulsa Mayor G.T. Bynum, and California librarian Jo Ellen Misakian, among others.

Misakian, many say, was the impetus for the Hinton novel becoming a movie. She sent Coppola a letter signed by over 300 students explaining that the book was cult reading among teens.

“The series of miracles that had to happen for him to get the letters is incredible,” O’Connor said.

CALGARY, Alberta (AP) — Mikael Backlund scored the deciding goal in the seventh round of a suspenseful shootout and the Calgary Flames beat the Pittsburgh…

NEW YORK (AP) — There’s a famous saying in showbiz: “Never work with children or animals.” NBC is wisely ignoring that as it mounts a…

Cherub is a young male under a year old. He is extremely shy but is slowly getting better. Cherub would like to be adopted with…

(Family Features) When tried-and-true family favorites turn stale and boring, digging through cookbooks and sorting through blogs for new recipes may seem far too time-consuming…

BOSTON (AP) — One of the first coins minted in Colonial New England, which was recently found among other coins in a candy tin, has…

LONDON (AP) — Dozens of customers who stopped for a drink at Britain’s highest altitude pub got a longer stay than they bargained for, after…

PHILADELPHIA (AP) — Temple fired coach Rod Carey on Monday after three seasons with the school, ending a tenure that started with a bowl game…

Over the last few weeks we’ve been talking a lot about big, regional-scale redevelopment partnerships and programs. Such partnerships come with their own set of…

By STACEY GROSS Staff writer In-person programming is still going on at local libraries, with both ongoing programs and changing offerings for school-aged youth. Annie…

PORTLAND, Maine (AP) — The last holiday season was far from the most wonderful time of the year for the U.S. Postal Service: Sick and…

Mac and Cheese with Pecan Breadcrumbs

From staff reports A generous bequest was made to the Clarion University Foundation, Inc., upon the passing of Norma “Toots” Stroup on July 24, 2021….

From staff reports The Department of Health announces a free outdoor, drive-up COVID-19 testing site is open for the public in Jefferson County. Testing is…

From staff reports The Pennsylvania Great Outdoors Visitors Bureau has announced that a winter landscapes photo contest will run from December through February. Finalists’ photos…