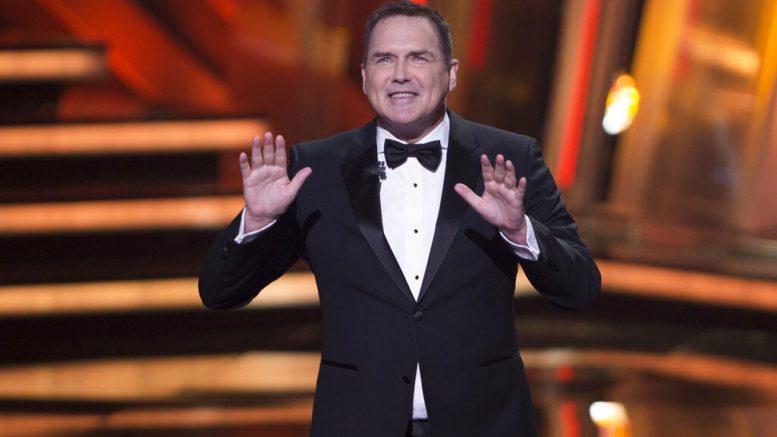 Norm Macdonald hosts the Canadian Screen Awards in Toronto on March 13, 2016. Macdonald, a comedian and former cast member on "Saturday Night Live," died Tuesday, Sept. 14, 2021, after a nine-year battle with cancer that he kept private, according to Brillstein Entertainment Partners, his management firm in Los Angeles. He was 61. (AP)

NEW YORK (AP) — Reactions to the death of Norm Macdonald, who died of cancer Tuesday at age 61.

“I am absolutely devastated about Norm Macdonald. Norm had the most unique comedic voice I have ever encountered and he was so relentlessly and uncompromisingly funny. I will never laugh that hard again. I’m so sad for all of us today.” — Conan O’Brien on Twitter.

“Every one of us loved Norm. Some of the hardest laughs of my life with this man. Most fearless funny original guy we knew. An incredible dad. A great friend. A legend. Love u pal.” — Adam Sandler on Instagram.

“Norm was in a comedy genre of his own. No one like him on this planet. Please do yourself a favor and watch his stuff. He was one of a kind of all time” — Sarah Silverman on Twitter.

“He was one of our most precious gems. An honest and courageous comedy genius. I love him.” — Jim Carrey, via Twitter.

“The world was a much funnier place because Norm Macdonald was in it. We’ve lost a comedic genius and a great Canadian. Sending my condolences to his loved ones and countless fans mourning his passing.” — Justin Trudeau, Prime Minister of Canada, on Twitter.

“Norm was a great talent, and I loved laughing with him on SNL. (asterisk)Bob Dole(asterisk) will miss Norm Macdonald.” — Former Senator Bob Dole, who Macdonald often played on “Saturday Night Live,” via Twitter.

“He was an original. When I watched young comics on the early comedy TV shows, like The Improv or Catch a Rising Star, I’d study each comic’s style and think, oh yeah, he’s doing Leno or he’s doing Letterman or he’s doing Rickles. When Norm came on, I said he’s not doing anybody.” — Bob Newhart, in an emailed statement.

“We loved Norm MacDonald. One of a kind.” — Steve Martin, via Twitter.

“I was a huge fan of Norm Macdonald and I essentially ripped off his delivery when I first started acting, I would stay up specifically to watch him on talk shows. He was the funniest guest of all time. We lost a comedy giant today. One of the all-time greats.” — Seth Rogen, via Twitter.

“Oh my God, what is even happening. Goodbye, Norm. You were never not 100% hilarious.” — Patton Oswalt, via Twitter.

“Your intelligent comedy and the way you cared so much about words and sentences and storytelling was like no one else. Just brilliant. Your writing was like poetry.” — Molly Shannon on Instagram.

“Today is a sad day. All of us here at SNL mourn the loss of Norm Macdonald, one of the most impactful comedic voices of his or any other generation. There are so many things that we’ll miss about Norm — from his unflinching integrity to his generosity to his consistent ability to surprise. But most of all he was just plain funny. No one was funny like Norm.” — “Saturday Night Live,” in an emailed statement.

CALGARY, Alberta (AP) — Mikael Backlund scored the deciding goal in the seventh round of a suspenseful shootout and the Calgary Flames beat the Pittsburgh…

NEW YORK (AP) — There’s a famous saying in showbiz: “Never work with children or animals.” NBC is wisely ignoring that as it mounts a…

Cherub is a young male under a year old. He is extremely shy but is slowly getting better. Cherub would like to be adopted with…

(Family Features) When tried-and-true family favorites turn stale and boring, digging through cookbooks and sorting through blogs for new recipes may seem far too time-consuming…

BOSTON (AP) — One of the first coins minted in Colonial New England, which was recently found among other coins in a candy tin, has…

LONDON (AP) — Dozens of customers who stopped for a drink at Britain’s highest altitude pub got a longer stay than they bargained for, after…

PHILADELPHIA (AP) — Temple fired coach Rod Carey on Monday after three seasons with the school, ending a tenure that started with a bowl game…

Over the last few weeks we’ve been talking a lot about big, regional-scale redevelopment partnerships and programs. Such partnerships come with their own set of…

By STACEY GROSS Staff writer In-person programming is still going on at local libraries, with both ongoing programs and changing offerings for school-aged youth. Annie…

PORTLAND, Maine (AP) — The last holiday season was far from the most wonderful time of the year for the U.S. Postal Service: Sick and…

Mac and Cheese with Pecan Breadcrumbs

From staff reports A generous bequest was made to the Clarion University Foundation, Inc., upon the passing of Norma “Toots” Stroup on July 24, 2021….

From staff reports The Department of Health announces a free outdoor, drive-up COVID-19 testing site is open for the public in Jefferson County. Testing is…

From staff reports The Pennsylvania Great Outdoors Visitors Bureau has announced that a winter landscapes photo contest will run from December through February. Finalists’ photos…