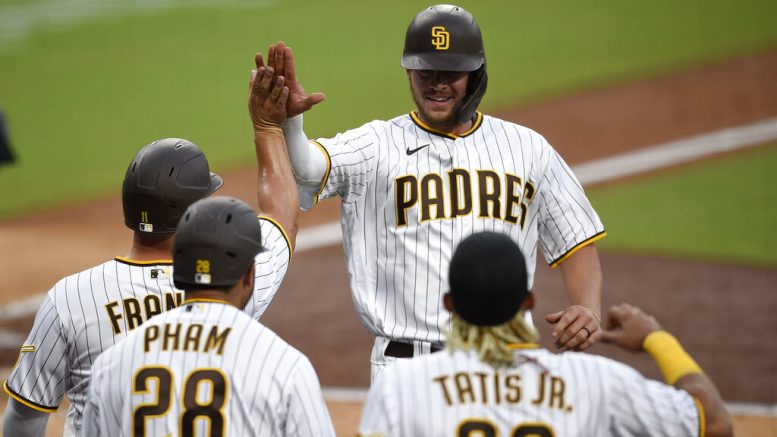 Manny Machado and Wil Myers homered to back Dinelson Lamet, who pitched brilliantly into the sixth inning of the Padres’ 5-1 victory against the Diamondbacks on Saturday night.

Lamet (1-0), who made 14 starts last year in a comeback from Tommy John surgery, held the Diamondbacks to one run and five hits while striking out eight and walking one. Rookie manager Jayce Tingler pulled Lamet after he allowed a leadoff double in the sixth to Starling Marte on his 80th pitch.

Myers’ three-run homer in the fourth was the Padres’ first of the year and highlighted a rough second time through the order for Arizona left-hander Robbie Ray.

“I think what you see is a pitcher getting worn down a lot,” said Myers, the designated hitter. “Tonight we had the starter at almost 100 pitches in 3 2/3 innings. If you can put at-bats like that together over and over again, it wears on that other team. Even that first game we had last night, even when they brought bullpen guys in we worked at-bats. We hurt their bullpen for this series by making them throw a lot of pitches.”

Ray held San Diego to just a single and a walk in the first three innings before quickly getting into trouble in the fourth. Tommy Pham drew a leadoff walk and stole second. Ty France singled with one out and Myers drove a 2-2 pitch into the left field seats for a 3-1 lead.

Edward Olivares, making his major league debut, doubled for his first hit. Ray struck out Austin Hedges but walked Trent Grisham and was lifted for Stefan Crighton, who got the final out of the inning.

“I think that’s kind of our M.O. is to go out there and grind out at-bats,” Myers said. “That’s how you win ballgames. Yesterday we scored seven runs without a home run. We haven’t done a ton of that since I’ve been here, scoring runs without home runs. It’s kind of cool to see the offense clicking that way. It’s been a lot of fun so far.”

Machado hit a two-run homer to left-center off Hector Rondón in the seventh. Fernando Tatis Jr. was aboard on a leadoff double.

“They both were big,” Tingler said about the home runs. “Wil’s was big just because we were down. It felt like we kept getting on here and there. I was hoping we were going to cross the dish and finally Wil clicked one, and then Manny, after the Tatis double, to be able to add some insurance on, it was huge.”

The Diamondbacks got to Lamet for a run in the fourth. Marte hit a leadoff single, advanced on Hedges’ passed ball and scored when Christian Walker’s double bounced past a diving Pham in left field.

“I feel great,” Lamet said. “The biggest thing for me was the excitement. It’s great the 2020 season was able to kick off and get under way.”

Ray said he was “kind of battling my timing a little bit the whole game. I was getting a little quick. First time facing someone this year with a different jersey on, you can credit that to adrenaline or whatever. I was just kind of getting under the ball, fastballs were riding up and away on me. I was falling behind in some counts.”

Arizona manager Torey Lovullo thought Ray got off to a good start before running deep counts in the third and fourth.

“It built up on him, two- and three-ball counts, not attacking the zone the way he was, not finishing off hitters when he had the opportunity. Just two consecutive innings that were very long and grinding,” Lovullo said.

Pham has four stolen bases in two games. He tied his career high with 25 last year.

Padres: 1B Eric Hosmer, who had six RBIs on opening night, was scratched about an hour before the game with what the team said was a non-COVID-19 illness. He was replaced in the lineup by France.

Diamondbacks: RHP Zac Gallen is scheduled to start Sunday. He was a combined 3-6 with a 2.81 ERA between the Marlins and Diamondbacks in his rookie season of 2019, including a 4-1 win against San Diego on Sept. 4 in which he threw seven shutout innings. He allowed one hit, one walk and struck out eight.

Padres: RHP Garrett Richards makes his season debut. He was 0-1 with an 8.31 ERA in three starts late last season as he came back from Tommy John surgery. He has a 2.25 ERA in 20 career innings against Arizona.