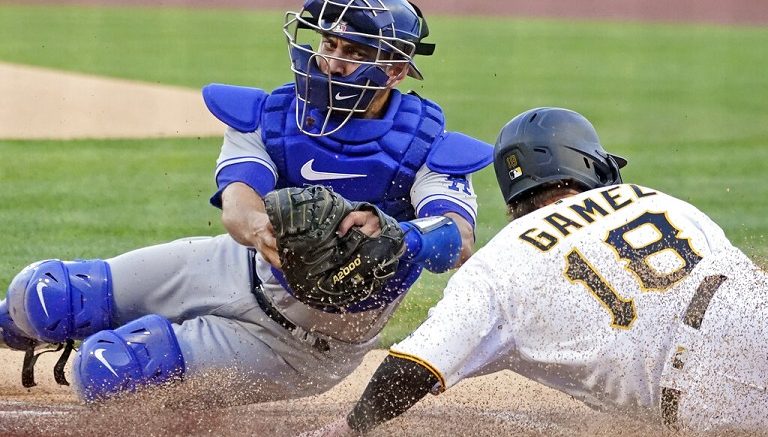 Los Angeles Dodgers catcher Austin Barnes, left, tags out Pittsburgh Pirates' Ben Gamel (18) who was attempting to score on a sacrifice fly by Ke'Bryan Hayes during the first inning of a baseball game in Pittsburgh on Tuesday, May 10, 2022. (AP)

PITTSBURGH (AP) — Justin Turner hit three of the Los Angeles Dodgers’ eight doubles and finished with four hits and four RBIs in an 11-1 victory over the Pittsburgh Pirates on Tuesday night.

The Dodgers hadn’t hit eight doubles in a game since moving to Los Angeles from Brooklyn in 1958. The franchise record is nine.

Turner entered the game hitting .168, and the two-time All-Star raised his average 32 points.

“I’m having better at-bats, I’m feeling a little bit better, I’m hitting the ball harder,” Turner said. “Obviously, there’s been a lot of work in the cage before the games, but there’s also been a lot of talk with our hitting guys. I’m just trying to get that feel at the plate again where I can get my best swing off.”

Dodgers manager Dave Roberts was happy to see the No. 5 hitter in the batting order have a big game.

“It was a good day for J.T.,” Roberts said. “I know he feels good about the process, but there’s nothing that feels better than getting results, especially when you’ve been scuffling.”

Turner’s first double to deep center field capped a two-run first inning, and that was all the runs Tony Gonsolin and the Dodgers bullpen needed. The first run scored on back-to-back doubles by Freddie Freeman and Trea Turner.

Gonsolin (3-0) allowed one hit in five shutout innings and had five strikeouts while walking four. Dodgers starting pitchers are 16-3 with 1.83 ERA through 28 games this season.

Gonsolin combined with four relief pitchers on a four-hitter.

Edwin Rios had three hits and three RBIs while homering for the second straight game. Trea Turner and Gavin Lux contributed two hits each as the NL West-leading Dodgers had 15.

Bryse Wilson (0-2) was hammered for six runs and eight hits in 2 2/3 innings, needing 70 pitches to get eight outs. He struck out four and walked one.

Wilson was knocked out during a five-run third inning that extended the Dodgers’ lead to 7-0. Justin Turner hit a two-run double and scored on a single by Rios, then Austin Barnes capped the outburst with a two-run double.

Rios’ two-run homer concluded a four-run seventh against Beau Sulser that made it 11-0 and gave the Dodgers their 24th win in their last 27 games against the Pirates.

Mookie Betts’ 10-game hitting streak ended as he went 0 for 5 but the Dodgers right fielder had his second assist in as many days.

The Pirates lost for the ninth time in 13 games. They avoided being shut out when Yoshi Tsutsugo beat out an RBI infield single in the eighth.

Dodgers: LF Chris Taylor (bone bruise left knee) was out of the lineup a day after fouling a ball off his knee, but it was already a planned day off. He is expected to be in the lineup for Wednesday’s series finale. … C Will Smith (right pectoral soreness) missed his second straight game but is also expected to return Wednesday. … RHP Andrew Heaney (left shoulder discomfort) played catch for a second straight day. … LHP Victor Gonzalez will undergo exploratory elbow surgery Wednesday, and the Dodgers are hopeful he can return this season.

Pirates: OF Jake Marisnick (left thumb) was placed on the 10-day injured list a day after being hurt while making a diving catch. The team has not revealed the exact nature of the injury. RHP Max Kranick was recalled from Triple-A Indianapolis. … RHP Duane Underwood Jr. (right hamstring strain) pitched one scoreless inning for Altoona on Tuesday night in his fourth minor league rehab appearance.

Dodgers: RHP Ryan Pepiot will be activated from the taxi squad to start and make his major league debut. He was 2-0 with a 2.05 ERA for Triple-A Oklahoma City in six starts. The Indianapolis native expects to have a large contingent of family and friends in attendance.