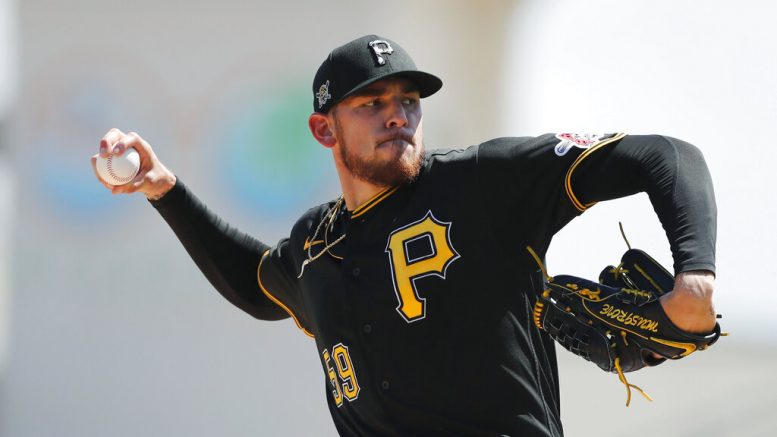 Pittsburgh Pirates starting pitcher Joe Musgrove plays during a spring training baseball game, Thursday, March 12, 2020, in Bradenton, Fla. Musgrove doesn't like wearing a mask more than any of his Pittsburgh Pirate teammates. Yet the pitcher wore one anyway during the first day of workouts on Friday, just one way he is trying to lead a pitching staff searching for an ace with Jameson Taillon and Chris Archer already out for 2020. (AP)

PITTSBURGH (AP) — Joe Musgrove isn’t trying to make a political statement when the Pittsburgh Pirates pitcher dons a mask, but a practical one.

Musgrove wants to play. Badly. The only way that happens is if Major League Baseball can avoid having COVID-19 spread through clubhouses. Pulling a piece of cloth over his chinstrap beard in an attempt to protect himself is a small price to pay.

“I don’t want to wear it any more than the next guy,” Musgrove said on Friday following the team’s first official workout ahead of a shortened 60-game season. “But we’re trying to keep guys safe.”

And maybe send a message to his teammates to put whatever their personal thoughts aside regarding an issue that has become highly divisive amid the pandemic aside.

The 27-year-old is the closest thing the Pirates have to an ace at the moment with Jameson Taillon out until 2021 while recovering from a second reconstructive surgery on his right elbow. Musgrove is also one of the few players in the clubhouse with a World Series ring after working out of the bullpen for Houston in 2017.

And at 6-foot-5 and 235 pounds, he carries himself with an imposing physical presence. If he wears a mask, people are going to notice. For Musgrove and the other leaders on a decidedly young team, the visibility of the gesture is the point.

“If you see the head guys around the team wearing their mask everywhere, if you see those guys telling others to put theirs on if they don’t have it on, everyone is going to fall in line and wear their mask,” he said.

“We’re not trying to boss people around or call shots. We’re trying to get everyone to wear them as much as we can. I feel like the more often I wear mine, people are going to see it and want to wear it … or they’re not going to want me to yell at them or say something to them, so they’ll throw it on.”

Even if it requires Musgrove and his teammates to tune out the noise surrounding the topic in the process. The Pirates posted a picture of Musgrove — mask and all — as he reported for work at an empty PNC Park on Friday. The comments quickly swerved into a debate not about Musgrove or the club’s potential during a 60-game sprint, but the simple act of donning a face covering.

The team is attempting to stay above the fray.

“We’re big on energy in our clubhouse,” Musgrove said. “That’s another thing with the masks. … If everyone comes in and is … complaining all day about having to wear these masks, our energy is bad. No one wants to be there and the energy kind of sucks. I think we’ve got the right mindset right now.”

They’re going to need it if they want to turn a year with very modest expectations into something else entirely. Having Musgrove — who went 11-12 with a 4.44 ERA last season — anchoring the top of the rotation is a must. He worked five innings of a simulated game on Friday and figures to be odds-on favorite to be the opening day starter. Though he understands the gesture of getting handed the game ball for the opener is largely symbolic, he’s doing everything he can to fill the role. His boss has taken notice.

“He’s the first guy when we’re having conversations about making sure we take care of ourselves at the ballpark and away from the ballpark,” manager Derek Shelton said. “He’s the first guy who is wearing his mask when he walks in and is making sure. I definitely think he is going to step into that role on the mound and also in the clubhouse. That’s important. He has the traits and abilities to lead, players look to him to do that. I’m excited he’s taking that next step in his development.”

Musgrove spent most of the shutdown back home in southern California finding interesting spots to play catch, something he continued when he headed back to Pittsburgh. Yes, that really was Musgrove chucking it around at Point State Park, at the confluence of the Allegheny, Monongahela and Ohio rivers recently.

“No one came over and stopped us, but we had eyes all over us,” Musgrove said.

It’s something Musgrove is getting used to. During spring training, he stood at his locker nearly every day to take on questions surrounding the 2017 Astros, who were found guilty of using an intricate sign-stealing system on their way to a title. Musgrove made a conscious attempt to not run away from it, even if it tainted one the most joyous moment of his baseball life.

The talk has faded in recent months. Having your sport thrown into chaos as part of the nationwide fallout of COVID-19 will do that. Musgrove is eager to move forward, even if it’s in a mask.

“I think we’ve got the talent,” Musgrove said. “You take away over half the games and ask us to be good for two months, I think that’s something we can do.”