On the 15th of February, many students gathered at Keystone High School to participate in District Band. 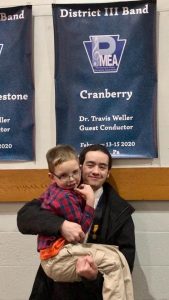 Out of those said individuals, Dylan Lu, of our own Cranberry Junior Senior High School, qualified for Regional Band after doing well in the audition.

Regionals will be held on March 25 at IUP for every student who qualified as well as any people interested in watching. This event is fundamentally the same thing as District Band but on a larger scale.

According to Dylan Lu, the music for Regional Band is quite challenging, and they only have approximately a month to practice and prepare. If he does well on the regional level, there is a chance for him to advance to a state level competition.

In preparation for Regional Band, Lu plans to practice significantly more than he did for District Band, and also plans to purchase or use a higher quality clarinet.

For those interested in participating in District Band and/or qualifying for Regional Band in the future, Lu highly recommends it.

“It’s a lot of work, but it’s playing at a whole new level. If  band gets boring, I’d try it. If it doesn’t get boring, it’s worth it to better yourself,” Lu stated.