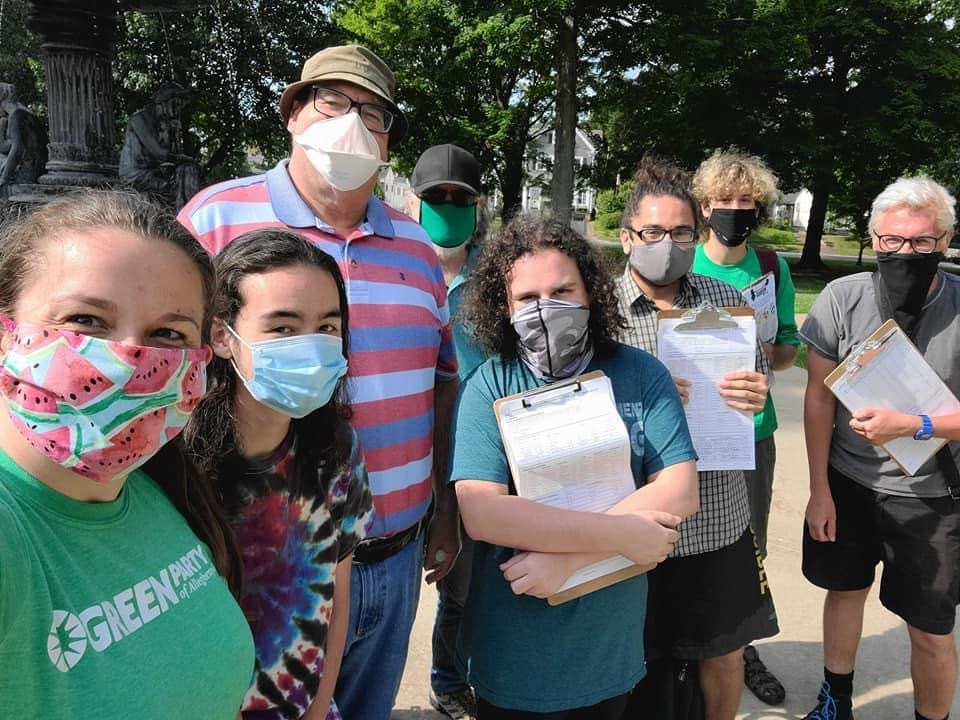 On Sept. 17, 2020, the leftwing Green-Socialist Coalition was removed from the ballot in Pennsylvania by the PA Supreme Court with a vote of 5-2. Five of the Democrat judges agreed with this ruling.

During the weeks leading up to this ruling, the Green-Socialist Coalition, colloquially known as Watermelons, was slandered by Democrats in the mainstream media on a national level. Accusations, such as the Greens intentionally trying to delay the mail in ballots and the Greens being a tool of the Republican party to split the Democratic vote, were slung around by sources such as MSNBC’s Rachel Maddow.

In this piece, the discussion of events and ideals from the seldom heard Green Party perspective will be brought to light.

First, it is crucial to discuss why exactly the Green Party was kicked off the ballot. The Green Party, in order to get on the ballot, needed to collect 5000 signatures from registered voters across the state and submit them in Harrisburg to be verified.

The Green Party had requested relief from such a lofty total in order to be on the ballot in November, but the state had denied the request, informing members that they should have been petitioning during the red phase of the COVID-19 shutdown. Given the fact that schools had closed down nationwide due to the threat of the virus at the time, this idea that Greens should have been petitioning already is nothing short of ludicrous.

Nonetheless, the Green Party had diligently collected around 8000 from across the state to hopefully ensure that they had collected enough signatures to act as a buffer against any challenges. After turning these signatures in, the Democratic Party of Pennsylvania had the opportunity to challenge these signatures, which they did by declaring large sections of the signatures invalid.

After two weeks of verifying, Green Party members took these double checked petitions to Harrisburg again in order to certify that they gathered the necessary amount of signatures. The Green Party was allowed on the ballot, but the Vice Presidential candidate, Angela Walker, was removed on account of her straw candidate filing paperwork late.

Due to the court case being directly related to which candidates are on the ballot, mail in ballots were delayed by this process. This, in turn, led the Democratic Party to inappropriately assign the blame to the Greens.

The accusation was a half truth. While the legal proceedings did delay the production and distribution of mail in ballots, it was the Democratic Party that instigated the legal action by trying to challenge the Green Party off the ballot. By this point, the ballots would already have been delayed, which plays right into the narrative that the Green Party is one of the many pawns of Russia and the Republican Party. This is not only McCarthy era Russian baiting nonsense, but it is also untrue.

In what world does an explicitly socialist coalition collaborate with a party as deeply reactionary as the Republicans?

By this point, it should be crystal clear that the Democrats put the Greens between a rock and a hard place: either be attacked by the media for “colluding with the Republicans,” or give up on ballot access. Nonetheless, the Howie Hawkins Campaign continued fighting their uphill legal battle.

The Democrats, unhappy with just eliminating Angela from the ballot, took the case to the Democrat majority Pennsylvania Supreme Court. Desperate to find a lawyer, the Howie Hawkins campaign tried to connect with progressive and leftwing lawyers to help plead their case, but unfortunately, the only lawyer willing to help was affiliated with the Republicans. Howie Hawkins accepted this help because it was the only aid available to him.

Not long after, many media outlets slandered this choice, using it as evidence of some convoluted long con enacted by the Republican Party to steal votes from Democratic Nominee Joe Biden.

However, let us remember that, not more than a few months prior at the Democratic National Convention, top Republicans were invited to speak including John Kasich and Susan Molinari. These Republicans were featured more prominently in the convention than the Democrats’ own progressive wing, and when combined with the Lincoln Project and various other cross aisle collaboration between Never Trump Republicans and Moderate Democrats, it became clear who was actually colluding with the Republican Party.

As it pertains to this specific instance, this Republican help was not enough to secure Howie Hawkins’ name on the ballot. The Green Party presidential nominee’s space on the ballot was slain by an affidavit that was faxed in rather than being the original copy. While this is not proper procedure, the Green Party was ensured at the previous hearing that this affidavit would not be an issue if it were faxed in; ironically, it was the Achilles Heel of Howie’s ballot access efforts in Pennsylvania.

The Democratic Party had finally succeeded in getting Howie off the ballot, but what does this truly mean?

I spoke to a few Greens that I personally knew regarding this verdict, and they all had the same answer for me: “we will write Howie and Angela in.” This move did not defeat the Green Party nor weaken its resolve, but instead, it galvanized and spited its already slighted members.

How could we vote for people telling us that we were colluding with the enemy while they invited that same “enemy” to their national convention?

Some of the issues that the Green Party is fighting for are long overdue, and this party’s members cannot afford to always take a back seat as they had following the debacle involving Ralph Nader in the 2000s. Greens are still in the same position; disenfranchised voters that chose Nader over Gore are held more accountable than the Democrats that voted for Bush.

It appears that the moderate Democrats are more likely to work with the Republicans under the guide of bipartisanship rather than with many of the young voters that will determine the future, or lack thereof, for the Democratic Party. This is evident as the Democrats have opened their arms to Bush, accepting him and members of his administration into their anti-Trump coalition.

Furthermore, the Democrats refused to throw a bone to the leftwing of the party with policies such as the popularly supported Medicare for All, Green New Deal, an end to fracking, a $20 minimum wage, national decriminalization of marijuana, and Ranked Choice Voting.

Biden and his campaign have walked back on fracking, hinted towards further intervention in Venezuela, proposed half measures to combat the accelerating disaster of climate change, and fervently defended expanding the bloated corporate contract that was Obamacare. There’s a candidate on the right side of these issues for decades, unlike either Biden or Trump, but they are only available to write in on this election day.

The Green Party is not expected to win this election, but it is foolish to pretend the party doesn’t exist. This political party is currently polling at close to double what it was polling last year at this point in time even prior to the nightmare of the 2020 presidential debates. These unfortunate confrontations sent more potential voters to howiehawkins.us than the site could handle.

This election, Greens are hopeful that they can win 5% of the popular vote, close to double what Jill Stein won in 2016. By achieving this 5%, the Green Party will earn ballot access in many more states as well as receiving $20 million in federal funding. The significant increase in funding would dwarf the few hundreds of thousands raised solely through person donations.

This year, 190 candidates are running under the Green banner nationwide. From Franca Muller Paz’s Baltimore City Council run to Lisa Savage’s senatorial campaign in the state of Maine to even Michael Bagdes-Canning’s challenge to the otherwise unopposed R. Lee James for the 64th seat in the Pennsylvania State House, the Green Party is more prevalent than ever.

In 2021 and 2022, the Green Party of the United States plans to attempt running for thousands of local and state level seats in the first of many Green Waves. The ballot access and funding this party could get from 5% will likely determine how successful this bold campaign will be.

An unprecedented number of people are utterly fed up with the 2 party system, leaving it in favor of groups like the Green Party. This statistic is shown by the fact that the Green Party has grown exponentially since 2012. Biden was chosen by many for his supposed electability, yet droves of young Democrats are leaving for greener pastures and are likely to accelerate this giant leap towards the viability of the Green Party.

These numbers will only grow as the Republicans and Democrats alienate and exploit their constituents. I am not alone in these convictions as many have seen the differences between the Democratic and Republican parties narrow as the years pass.

Voters are not obligated to vote for a candidate; candidates are obligated to earn the support of the voter. Though I will have to write them in, Howie Hawkins and Angela Walker of the Socialist-Green Coalition have earned my vote through their lifetime struggle of fighting, writing, campaigning, protesting, and speaking on behalf of working class people as opposed to the Biden and Trump supported multinational corporations.

Dylan Lu is a student at Cranberry High School and a member of Cranberry Chronicles, the school’s journalism/publications class.